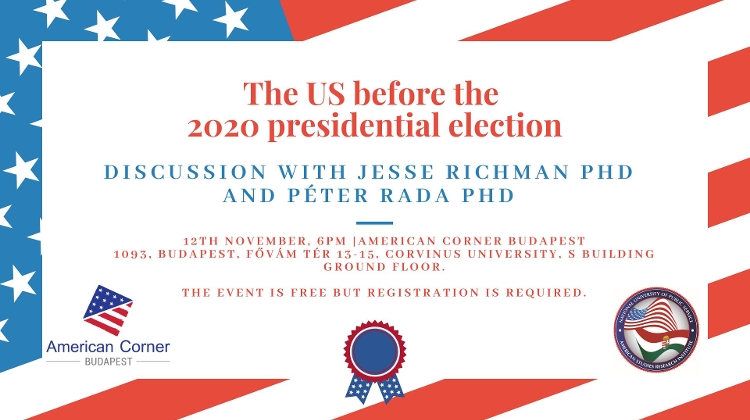 November 2019 is one year away from the 2020 US presidential elections. But the first voting in the Democratic Party primaries to determine which candidate will face President Trump will begin in early 2020, and impeachment probes are expanding in the House of Representatives.

The event is free, but registration is required. The language of the event and the discussion will be English.

Registration:
- Please do not use your email address to register multiple people otherwise your registration will be invalid.
- Registration deadline: 11th November 1 pm.

Jesse Richman received his PhD from Carnegie Mellon University, and taught at Vanderbilt University before coming to Old Dominion University in 2006. At ODU he is Associate Professor of Political Science and International Studies and teaches courses in the fields of American politics, international studies, research methods, and game theory.

His research interests include state legislative politics, Congress, voting participation, representation, trade policy, and political economy. His research has appeared in a variety of journals including the American Political Science Review, Legislative Studies Quarterly, Journal of Politics, State Politics and Policy Quarterly, the Review of Law and Economics, and Electoral Studies.

He is also the coauthor of two books on trade policy. Jesse was an American Political Science Association Congressional fellow from 2011-2012, and in 2019 was selected to serve as a Fulbright Scholar at the National University of Public Service in Budapest Hungary.

He has appeared on most major US national television news networks, and has published in a variety of U.S. newspapers including the New York Times and the Washington Post.

Dr. Rada has been an associate professor since 2017 at NUPS and he served as Vice Dean for Academic and International Affairs. Before that he served as the Congressional Liaison Officer at the Hungarian Embassy in Washington, D.C. between 2015 and 2017.

Prior to this assignment he worked at the Ministry of Foreign Affairs and Trade and also in academia at several Hungarian and foreign universities. He was also the head of the Corvinus Society, a Budapest based think-tank dealing with international politics and security policy.

Peter has published several articles, book chapters on security policy and Trans-Atlantic cooperation and co-authored a textbook on security studies. Peter participated at the U.S. State Department’s International Visitor Leadership program in 2010 and was a Fulbright visiting scholar at SAIS, the Johns Hopkins University, Washington, D.C. and The Columbia University, New York in 2008-2009.

He was also invited to join the Munich Young Leaders program of the Munich Security Conference in 2013, the Young Atlanticist Working Group of the Atlantic Council in 2012 during the NATO Summit in Chicago and also the Future Leaders Program of the Washington based Foreign Policy Initiative in 2016.
Place: American Corner Budapest
Address: 1093 Budapest, Fővám tér 13-15.