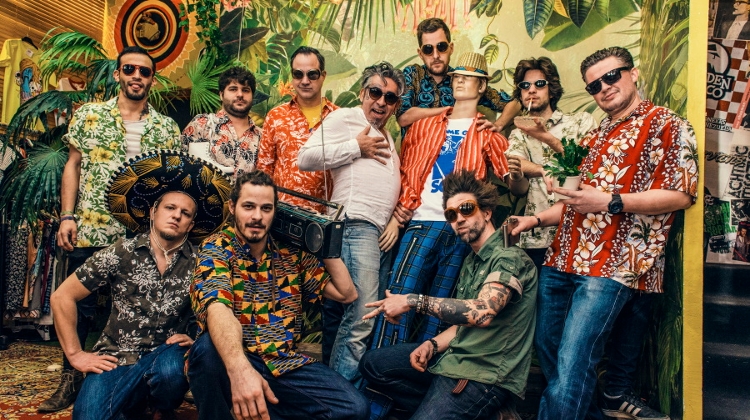 Los Orangutanes with singer Ivan Tabeira from Uruguay and guitarrist Alex Torres from Peru, is a Latin-American cumbia band from Hungary, unique also in Central and Eastern Europe and proved that this kind of music can’t be listened to while sitting down - a dance party atmosphere is guaranteed.

The group debuted in December 2017 to a full house in Budapest, and has regular monthly clubnights at the most frequented venues of Budapest (Ellátóház, Instant, Kuplung, A38, Pontoon) since then. The band has already played at Sziget Festival, and as guest of the band Irie Maffia had a concert at Budapest Park as well.

Exceptional event of 2018 was the fullhouse concert of Los Orangutanes at Mupa (Palace of Art) where the band will introduce itself to the audience in form of a big band, presenting the origin and improvement of the genre. Special guests were Shango Dely from Columbia and Mario Ochoa from Honduras.

Original cumbia was played on the flute and percussions. Legend has it that a freight ship transporting accordions to Argentina sank at the beginning of the 20th century and the water washed a lot of instruments ashore, which then were collected by the locals.

They started to use them and grew fond of them so much that the accordion became one of the main instruments of the genre. In the ‘40s traditional instruments were followed by the fashionable big band sound and thanks to music recording, cumbia began to spread all over the world.

Since then everyone has added something from their own culture, so now there are schlager, gangster, hipster, electro, traditional as well as dub versions.