On Display: The Coronation Mantle In National Museum In Budapest 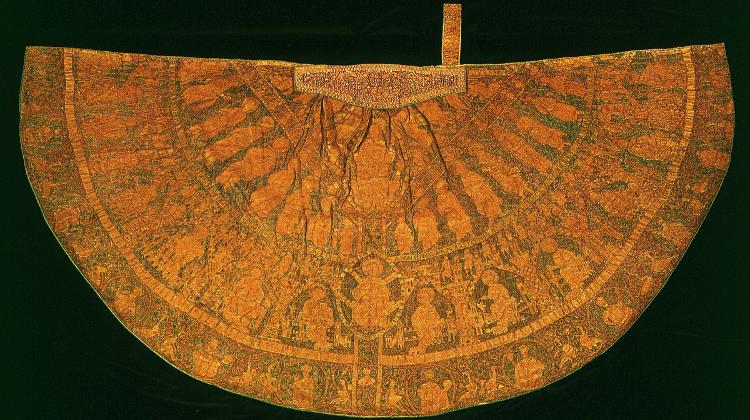 One matchless treasure held by the Hungarian National Museum is the mantle that used to be worn by Hungarian monarchs at their coronation; it is a garment that King Stephen I (St. Stephen of Hungary) and his wife Gisela of Bavaria had made in 1031.

The mantle was originally a bell-shaped, one-piece chasuble; it was altered to make a mantle later on. According to the inscription embroidered on it, the chasuble was made on the instructions of King Stephen I (r. 997–1038) and his consort Gisela and was presented by them to the Church of the Virgin Mary in Székesfehérvár in 1031: ANNo INcARNACIONIS XPI : MXXXI : INDICCIONE : XIIII A STEPHANO REGE ET GISLA REGINA CASULA HEC OPERATA ET DATA ECCLESIAE SANCTA MARIAE SITAE IN CIVITATE ALBA.

The ground fabric is rosette-patterned Byzantine silk which is covered almost entirely with ornament embroidered using gold thread. On the back of the mantle is a Y-shaped cross. The raised arms of this cross feature half-length depictions of angels, while the vertical element shows two depictions of Christ, one underneath the other. In the upper one, Christ is shown as the conqueror of death with His feet on two dragons; in the lower one, He sits on His throne as judge of the world.

The rest of decoration is organised into bands: above are Old Testament prophets while below them – separated by the presentation inscription – sit the Apostles in richly worked tower-shaped niches. Below them, in circular medallions separated from one another by a pair of birds, Christianity’s first martyrs are depicted. Between them, at the foot of the cross, there is a depiction of the royal couple who made the presentation, accompanied by an inscription.

King Stephen is shown wearing a circlet crown featuring gemstones; he has a winged lance in his right hand and an orb in his left. Gisela’s crown is similar to the king’s; in her hands is a reliquary in the shape of a tower. Between them, in a circular frame on the upright of the cross, can be seen a half-length portrait of a young man: he is probably Prince Emerich, their son.

When the alteration was made, a broad strip was cut from the chest part of the chasuble, and of the square-framed and mandorla-framed scenes only small parts remain. (A mandorla is an oval-shaped halo: in the depictions, the figures of Jesus, Mary, and the saints all have one.)

The ample inscriptions on the mantle contain on the one hand the names of the figures and on the other hand explanatory Latin texts in hexameters embroidered onto the frames. Also, the mantle depicts figures from the Te Deum, one of the best-known hymns of the medieval period: the angelic host, prophets, Apostles, and saints named in the hymn are depicted in rows.

The chasuble may have been altered around the turn of the 13th century, when long, sleeveless, mantles became fashionable. It was then that the garment was given its collar, which likewise consists of a Byzantine silk ground embroidered with gold thread; it is ornamented with animal figures in arcading and has real pearls sewn onto it.

Similarly to the mantle, the collar, too, was originally a part of ecclesiastical attire; it was embroidered in the second half of the 12th century. The first datum in which the mantle features is a record relating to the coronation of King Andrew III of Hungary (r. 1290–1301). According to this, ‘the king was in attire such as St. Stephen wore earlier on.’