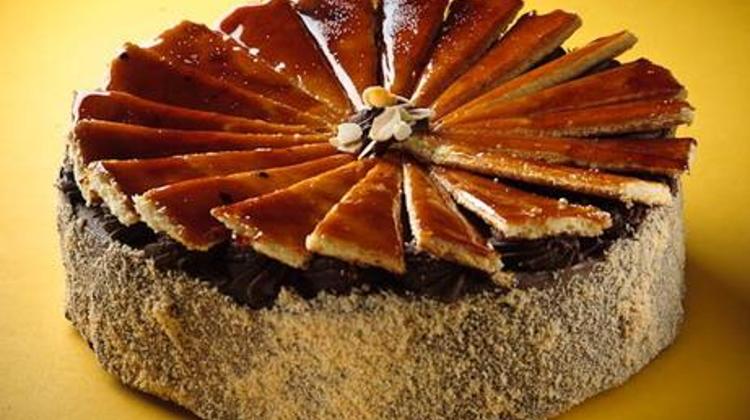 Dobos cake, Rigó Jancsi, Esterházy cake… just some of the sweet classics of Hungarian cuisine and compulsory elements of a visit to any of the Hungarian confectioneries. From a romantic love story to 19th century innovation, they all have a story, and are much more than food: they are telling stories and are a piece of history themselves.

The cakes listed below are real classics of the Hungarian cuisine, so let's have a crash course of the most popular ones.

What a romantic story: this cake was named after a famous leader of a gipsy music band ('prímás' in Hungarian), János Rigó ('Rigó Jancsi'). The handsome young man was playing with his band in cafés and restaurants, and in one of them it happened in 1896 that Clara Ward-Chimay, wife of a Belgian prince and daughter of an American millionaire fell in love with him and they soon ran away together.

It was such a scandal that even Toulouse-Lautrec has immortalized the lovers in one of his drawings! They spent together several years, and it is believed that once Jancsi was pampering the woman with a cube-shaped cake with chocolate cream – the confectioner who has made it, and also was a marketing talent, named the cake after Rigó Jancsi, and it was a great decision, as the cake has immediately become extremely popular. The chocolate sponge cake is filled with a rich chocolate cream and also topped with a layer of chocolate fondant galze – no wonder that no one can resist it.

There are more versions about the origin of this cake. It was named after a member of the Esterházy dynasty, Prince Paul III Anton Esterházy de Galántha, a wealthy nobleman and diplomat, and also a well-known gourmand, who gave his name to some other delicious dishes too. The cake probably was invented by Budapest confectioners in the 19th century, and because of it's uniquely delicious taste, soon has become on of the most popular cakes of the era of Europe.

The cake exists in several versions today, but originally it consisted of several layers of almond meringue dough and cognac or vanilla spiced buttercream. Nowadays the almond is replaced with walnut. The cake is topped with white fondant cream and is decorated with a very characteristic chocolate stripe pattern.

József Dobos C., a famous confetioner of the 19th century is the mastermind behind this cake, which was first introduced at the National General Exhibition of Budapest in 1885, and was admired by even Sissy (Empress Elizabeth) and Emperor Franz Joseph. This sponge cake is layered with chocolate buttercream and topped with crispy caramel. Originally the recipe was a secret, and the cake with elegant, simple forms has quickly become very popular in Europe.

Before his death József Dobos handed the recipe over to the federation of Hungarian confectioners, with the terms that from then it will be public for any confectioners wishing to recreate this cake – so now we can enjoy it in several pastry cafés throughout Hungary!

Chocolate, walnut and apricot jam: this is the triumvirate which unite in a perfect harmony of tastes in the form of zserbó. This cake was invented and got it's name from Emile Gerbeaud, a Swiss-born confectioner who moved to Budapest in 1884 and together with confectioner Henrik Kugler they opened a pastry café at Gizella Square – this is what has become legendary Gerbeaud Café, today at Vörösmarty Square.

The version that can be enjoyed here is „sweet-pastry filled with apricot jam and a mixture of confectioner's sugar and ground walnuts, topped with chocolate icing".

Somlói galuska (pron. shom-loh-ee gah-loosh-kaw) is different from the previous cakes: it was invented in the 1950s by the head waiter of legendary Gundel Restaurant, Károly Gollerits and realised by confetcioner József Béla Szőcs. Originally it is made up of three types of sponge cake: plain, cocoa and walnut flavoured, combined with walnuts, raisins, chocolate sauce and whipped cream.

"The favourite dessert of Hungarians" made it's debut at Brussels expo in 1958 and immedately won awards. Traditional serving means to scoop sponge cake balls into a bowl and top it with chocolate sauce and whipped cream.

János Rákóczi was a Hungarian chef, and like Somlói galuska, Rákóczi túrós also got it's international debut during the 1958 Expo in Brussels – the cake is said to be created by the chef specifically for this occasion, as part of a set of dishes that are uniquely Hungarian. The base of the cake is a thin layer of pastry base, then comes a layer of sweet curd cheese and meringue grid on top, filled with apricot jam.

There is basically no pastry café and confectionery without this cake in Hungary! With it's thick, wobbly creamy filling (made of egg yolk, milk, flour and the most important ingredient: vanilla!) and crispy top (sometimes topped with sugar icing) and bottom layers it is no wonder this light dessert has become a favourite. The history of krémes dates back to the end of the 16th century, but it's modern form evolved in the great era of confectioners, the 19th century.

Other cakes that can be found in almost any Hungarian pastry cafés include indiáner, grillázs, rétes (strudel), mignon and pozsonyi kifli (Pozsony nut crescents).