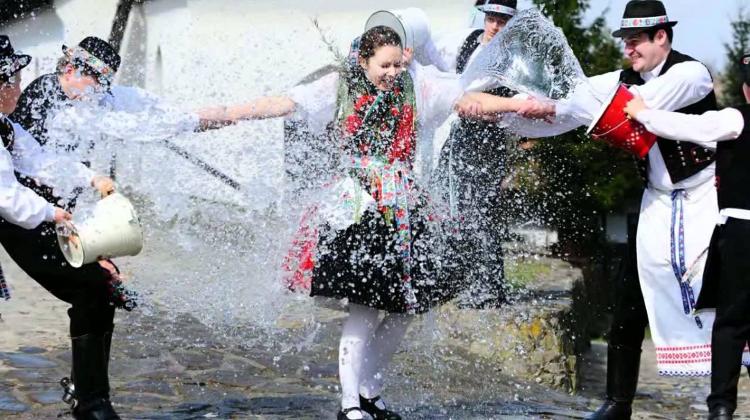 Small boys learn this rhyme when they are still in the kindergarten, and they sing it to girls on Easter Monday, and then promptly 'sprinkle' them - without waiting for an answer to the poem: "Through the greenwood going I saw a blue violet growing I saw it start to wither Can I water this flower?"

Many young men, and even older ones, do the same, though the range of verses at their disposal is rather wider, sometimes more sophisticated, and occasionally more spicy.

According to tradition on Easter Monday in Hungary, young farmhands are allowed to throw a bucket of cold well water over girls of marriageable age; and even to dip them in a stream.

The girls scream and resist, but are secretly delighted, again according to customs. Now eau de cologne has mainly replaced the water. A few splashes suffice, rather than a costly bucketful.

The ritual now involves women of all ages, married or unmarried, with female relations just as much a target as girlfriends, neighbors and work colleagues.

The day still has special significance for unmarried women and girls. They wear pretty clothes and await the unannounced arrival of their admirers.

Girls take a pride in attracting many visitors and “waterers.” After the boy has carried out his ritual role, he is offered gaily painted eggs, home-baked cookies, and an alcoholic drink. He is then free to go on to the next girl.

The sprinkling with water and the gift of Easter eggs is a pre-Christian fertility symbol far older than the celebration of Easter.

Easter Eggs and the Easter Bunny 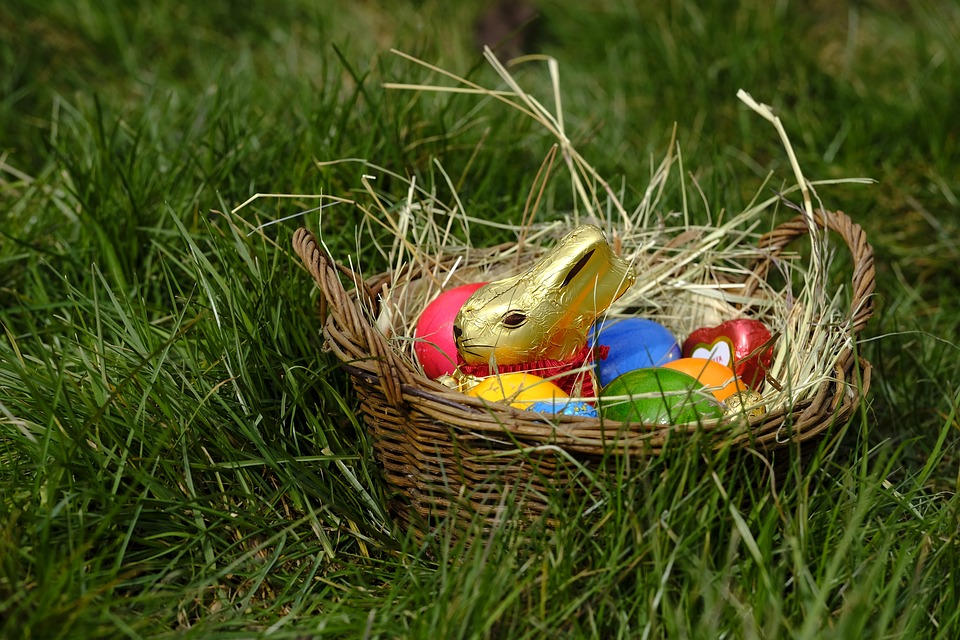 Within the Christian tradition, the custom of dyeing eggs red goes back a thousand years. Red symbolizes the blood of Christ; the egg, eternal life.

Other colors began to be used only three hundred years ago. Hungarian Easter eggs are decorated with simple geometric shapes or ornamented with swirls of plants and flowers. Ancient symbols sometimes feature too: the wheel of the sun or the cockscomb, for example.

The colorful flowers that adorn so many eggs echo the embroidery on Hungarian national costume. The decoration of Easter eggs is a Hungarian craft in its own right. Wax-resist dyeing is the most popular method: The pattern is painted onto the shell using a quill dipped in molten wax. The egg is dyed, and then warmed slightly to melt off the wax, so that the white, undyed pattern appears.

Engraving, an alternative method, requires the egg to be dyed first. The pattern is then engraved on with a knife. According to how deeply the surface is scratched, a deeper or paler color is revealed. A simple but effective method is to boil onion skins in water; boiling the eggs in this gives them a lovely dark brown color.

They are then rubbed with bacon rind skin to give them a sheen. Pretty, natural patterns in a paler color can be obtained by sticking leaves onto the shells of the eggs before they are boiled. Once the eggs are dyed, the leaves are removed.

Another traditional technique is to decorate blown eggs with tiny metal horseshoes. This requires some dexterity, so is done only by trained craftsmen. The first chocolate eggs arrived on the market at the beginning of the 19th century. The confectioners decorated these eggs lavishly; some creations featured in the local press.

One such was a chocolate egg with the picture – likewise executed in chocolate – of the chain bridge then under construction. Built between 1842 and 1849, this was the first fixed bridge over the Danube uniting Buda and Pest.

The Easter rabbit has rather more recent origins; it probably did not reach Hungary until the 20th century. It comes from a German cultural background, and is first mentioned at the end of the 17th century. Unlike the other Easter customs, which are rural in origin, the Easter bunny spread from the town outward. 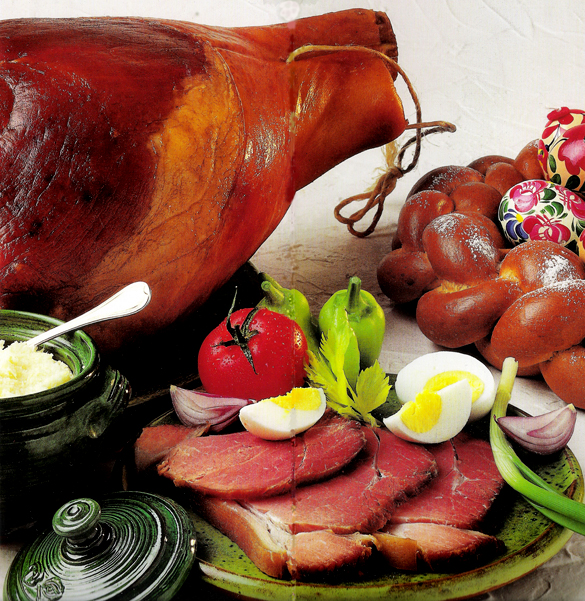 For the Hungarian celebration of Easter, the table is richly laden. Alongside slices of fragrant ham, the table is adorned with a braided Easter loaf; there are eggs, boiled in the cooking liquid from the ham, and grated horseradish, served alone or in a vinegar dressing. The accompaniments include mustard, radishes, and young onions.

“No Easter meal is complete without ham,” according to tradition. Indeed, Hungarians set great store by the Easter ham. It is sometimes taken to be blessed by the priest after Mass, along with the eggs, horseradish, and braided loaf. On the farm, when a pig is slaughtered, the best ham is reserved for Easter, and cured or smoked with extra care.

Equal care is taken when buying a ham for Easter. The traditional country ham is not the only kind available. Some opt for smoked knuckle; others for a boned and netted ham. This type proves less popular among those conscious of tradition, though it does have a lower fat content.

No festive meal would be complete without the Easter loaf. This is a light yeast bread with a golden brown crust, made in the form of a circular braid. In the Hungarian countryside, people have been baking such a loaf for special occasions for six hundred years.

More elegant than standard bread, it is an essential feature at Easter, Christmas, and country weddings. It is made in basically the same way everywhere, with slight regional variations in the dough, and variations in appearance according to the occasion.