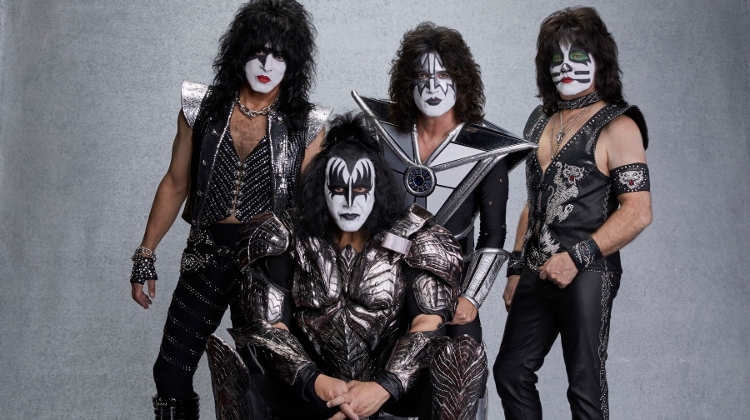 Explosions, riffs and flying superheroes: KISS draw all the stops on the END OF THE ROAD World Tour and celebrate a decibel-packed spectacle with massive production and legendary songs.

On this world tour the iconic band says goodbye to their fans after four and a half decades of superlatives. As the quartet announced exclusively at the KISS Kruise a few days ago, the multi-year tour in summer 2020 is once again rolling through Europe, including Budapest.

The make-up monsters offer nothing less than the big rock show, with pyros, lasers, a huge stage and more flashing lights than a small town. Paul Stanley, Gene Simmons, Eric Singer and Tommy Thayer spit blood and fire, they shoot missiles from their instruments and hover over the fans' heads.

In classic make-up they celebrate over two hours of songs that shaped a whole genre and led KISS in the Rock And Roll Hall Of Fame. This includes classics like "I Was Made For Lovin 'You", "Love Gun", "Deuce" or "Rock And Roll Nite" and other gems from 24 gold- and platinum-finished studio albums.

Launched in January 2019 in Vancouver, Canada, the END OF THE ROAD tour has taken the musicians to the largest halls in North America, across Europe, and to the headliner slots of major festivals. Oceania, Asia, South America and another round trip through the US are also on the plan.

KISS are a worldwide phenomenon, so they end their careers worldwide and with a mighty bang - or rather: with a whole lot of them, evening after evening. KISS continues to promise, "The tour will be the ultimate celebration for those who have experienced us and one last chance for those who missed it."

For all rockers, music enthusiasts and lovers of extraordinary concert experiences: "You wanted the best, you got the best. The hottest band in the world ... on their final tour ever: KISS!"