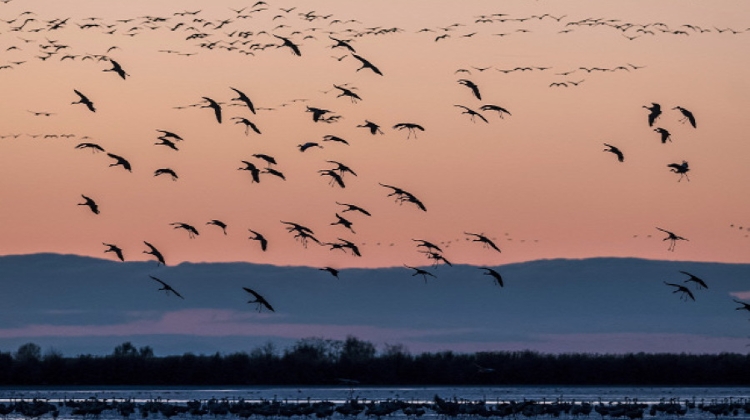 Alföld is what locals call 'The Great Plain', a place of legends, and legendary sights. The bird nature reserves its two counties contain, the Hortobágy, and the Tisza lake, have made it onto the UNESCO world heritage list for good reason. Take a quick trip through those three parts below, and then enjoy the summary video.

Three national parks can be found within its boarders, key sights include:

* one of the Greek Catholic faith's oldest sites,

* the plain's only medieval stone castle,

There isn't a region in Hungary which has as many events and festivals connected with gastronomy.

Baja has its halászlé (fish soup) cooking folk festival, while in Pusztamérges they hold the Szeged district's halászlé cooking competition.

In the Szatmár region they hold a plum jam making contest, while in Békéscsaba its salami, in Bereg its gulyás, and this is not to mention the many wine tastings and cultural events.

A World Heritage site since 1999, the Hortobagy National Park stretches over an area of 200,000 acre.

In this region the sun shines more hours than any other region in the country and abundantly flowing thermal water helps health-seekers to recuperate.

Smooth water, huge bays, backwaters and islands, rich fish and wild stock-this is Lake Tisza. In the middle of the Great Plain, Lake Tisza is the second largest surface of water in the country.

The Lake is situated on what was a flood-plain, and on the flooded territory of the River Tisza. In between water dams, there are sixteen islands and ten water channels. The shallow water areas, which warm up easily, are suitable for bathing.

The deeper parts are for water sports such as sailing, water skiing and surfing. Lake Tisza is also the only Lake in Europe where you can speed around by powerboat and jet-ski.

Along the riverbank (approximately 50 miles) there are recreation areas, open-air baths, camp-sites and places to hire equipment.

Best known for its tradition of distilling Barackpálinka (apricot brandy) and as the home of Zoltán Kodály, Kecskemét is also a university town and centre for the arts, and one of the Puszta’s most attractive cities.

Largely spared during the Turkish occupation, Kecskemét developed into a religious and cultural melting pot, which is reflected in its eclectic architecture today.

The farmyard animals are not the type you are used to either, grey long-horned cattle and Mangalica pigs are an added attraction.

By following one of the marked trails, you can also take in the local wildlife, including water buffalo, that may be hiding in the reedy marshland.

MTI Photo of cranes at Hortobágy by Zoltán Czeglédi.