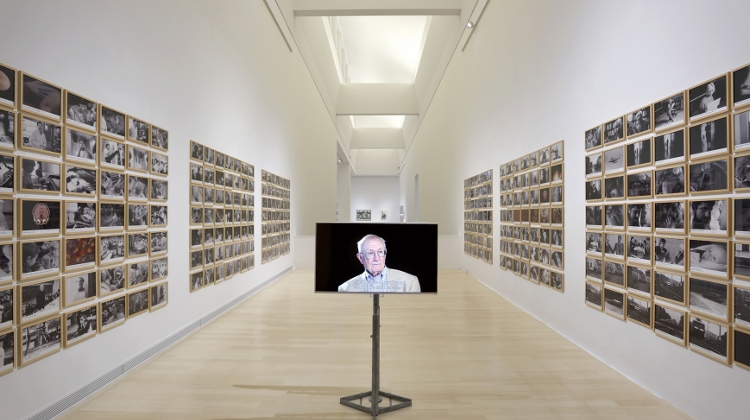 On view until 31 December 2021. Time machine is a device that only exists in theory so far, with the help of which we can fly our physical body into the past or the future.

From Lumu Team: The new exhibition at the Ludwig Museum is not about the science-fiction possibility of time travel, but examines the relationship between time and art from different perspectives, and sees the works themselves as time machines that allow us to travel mentally.

The exhibition was created during the short break caused by the pandemic, under extraordinary circumstances, so the organizers could not ignore the lessons of the recent period. From the museum’s collection of about 800 pieces, we have selected works that reveal different aspects of personal, artistic and historical time from the curator’s personal point of view.

The exhibition is introduced by works related to time, the passage of time and notable dates, and then giving insight into individual destinies and family stories, the private history of Central and Eastern Europe, through family photos and diaries.

Through the works as documents, we can learn about recent history, everyday life and turning points, including the change of regime in Eastern Europe and its connections to the historical avant-garde. We can think about the fate of monuments and the connections between art, society and politics.

We talk about social utopias and their failures, revolutions and wars, and literary utopias and inspirations, slogans and concepts.

The not-too-distant dystopian future and futuristic present will also feature an installation on medicine and the human body and psyche, as well as a film on contemporary warfare, war traumas and virtual reality. The moment of death was given special attention as the endpoint of human destiny, life path.

The works also draw attention to the fragility and unrepeatability of human existence, to the absurdity of wars and everyday life.

We present the real and imagined technical devices, which aim to capture the moment, the reality as perfectly as possible. We also examine the relationship between still image and moving image and (press) photography and painting, while also highlighting critical aspects of Photorealism.

In connection with Picasso, we recall how the greatest innovators of the twentieth century reflect on their great predecessors, the history of painting, by weaving an invisible web between ages, works, and artists, but we also look at how the “outsider” sees Western art.

Finally, we also examine the time “enclosed in a work”, listing the works that are composed of innumerable parts, variations, works into a monumental work in a time longer than usual, hence there is rarely an opportunity to present them.

Ludwig Museum is located inside the Palace of Arts (Művészetek Palotája) aka. MÜPA. The Museum's three floors are in the west wing of the building ensuring a spectacular view from the exhibition halls and the balcony and terrace.

Due to reconstruction works, suburban railway H7 and tram 2 don't stop at the Müpa-National Theater stop. The museum can be reached from Boráros tér by buses 54/55 and 23, or by the H7 replacement bus.

Tip: Tram 2 runs to Boráros tér, from where you can take a pleasant 10 min. walk to the museum via Gizella Promenade along the Danube bank.

Even when walking on foot along the river you can reach us within 30 minutes from the Great Market Hall.