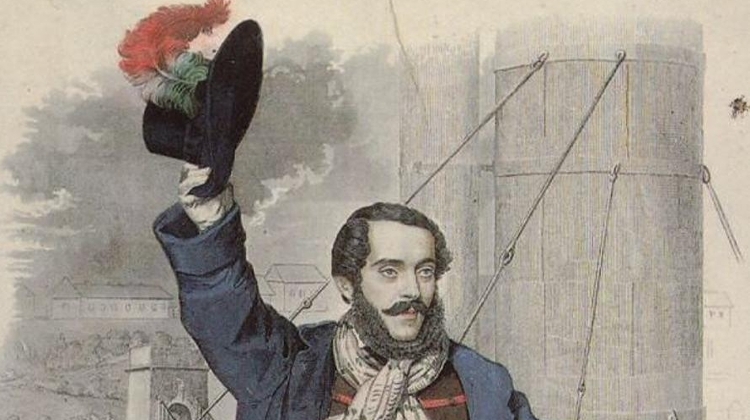 The Hungarian Revolution of 1848 was one of many of the European Revolutions that year, and was closely linked to other 1848 revolutions in the Habsburg areas. The revolution in the Kingdom of Hungary grew into a war for independence from the Austrian Empire, ruled by the Habsburg monarchy.

The wave of revolutions in 1848 started in Palermo, Italy, where people, led by Giuseppe La Masa, rose against the domination of the Bourbons on 12 January 1848.

One month later, the wind of change swept through France: the revolutionists drove away Louis Philippe de Bourbon, who had reigned since the 1830 revolution;, and proclaimed the Second French Republic. In the wake of the events in France, a series of revolutions erupted in Brussels, Vienna and Pest.

The Hungarian diet, which held its sessions in Bratislava at the time, was greatly excited by Lajos Kossuth’s bills on the emancipation of serfs, the general and proportional taxation, and the establishment of an independent national government, while the Opposition Circle (OC) was in a state of agitation in Pest.

The Opposition Circle OC comprised of middle-class intellectuals and young members of the nobility, who were instigated by a small circle of radicals in Pest, with Sándor Petőfi in the forefront.

The Circle drew up a 12 point petition, penned by József Irinyi, who was a young radical, on 11 March., and presented it in the form of 12 points. The petition’s claims surpassed even the bills of Kossuth, calling for the freedom of the press and equality before the law.

On 13 March, the Opposition Circle OC adopted the petition as its programme. On the same day, a revolution broke out in Vienna.

Count Klemens Wenzel von Metternich, the all-powerful chancellor who had exerted a powerful impact on the Habsburg emperor, Ferdinand I, was forced to step down and flee, and After, the monarch promised a constitution to the nations of Austria.

Meanwhile, the upper nobility adopted Kossuth’s bills in Bratislava, on 14 March, and later, a delegation conveyed them to Vienna on the next day.

With the intention of forwarding the 12 Points, which was signed by thousands of Pest citizens of Pest, to Bratislava, the young people who gathered in Pilvax Café in Pest’s centre, organised a rally and banquet in Rákos Field, for Saint Joseph’s Day; the day of the annual fair.

On hearing the news of the revolution in Vienna, though, the young people of Pilvax decided to seize control. Sándor Petőfi, Pál Vasvári, János Vidats, Károly Sükey, Gyula Bulyovszky, János Vajda and Mór Jókai decided to enforce the first claim of in the 12 Points, the freedom of the press, and have the 12 Points and National anthemSong, Petőfi’s inspiring poem, published without censorial permission.

On the morning of the following day, 15 March, Petőfi and his companions marched in a drizzling rain, from Pilvax Café to the medical university of Pest. After medical students joined them, nearly 1000 young people continued their way to the printing house of Lajos Landerer and Gusztáv Heckenast.

Upon arrival, Irinyi confiscated a printing machine and “in the name of the people”, and the printers printed setcopies of the National Song anthem and the 12 Points. At 3 pm they held a rally outside the National Museum;, and the ten-thousand-strong mass marched to the Pest city council, and persuaded its members to back their claims.

A revolutionary committee was set up, and the mass set out to Buda to force their claims through the dicasterium, the most important central government authority, subordinated to the monarch;, and to free from prison Mihály Táncsics, a writer and publicist incarcerated on charges of a press misdemeanour and subversion.

The Council of Governor-General did not dare resort to use military force. Instead, it accepted the 12 Points and released Mihály Táncsics. The revolution of Pest was bloodless, as opposed to Paris and Vienna.

The Bratislava Diet’s delegation to Vienna, set the main goal of appointing palatine István as the monarch’s all-powerful governor, and count Lajos Batthyány as prime minister.

The royal ordinance of 17 March included the appointment of palatine István, but not that of Batthyány. Nevertheless, Kossuth and Batthyány persuaded the palatine to exercise his unrestricted powers in order to fulfil their request.

Batthyány submitted a proposal for the members of his government to the lower house on 23 March. He was in such a hurry, that he had no time to ask seek for the consent offrom a number of his nominees beforehand.

The royal ordinance, which contained the monarch’s reaction to the law, and the establishment of eding the government’s responsibilities le to parliament, came as a major shockwas shocking. The monarch maintained the chancellery’s supervision over the government, and only granted absolute power to the current palatine, during the absence of the king. It ordained the assumption of a part of Austrian public debts and the payment of Hungarian revenues to the common treasury, and classified the Hungarian Ministry of Defence unnecessary.

The youth of Bratislava burnt the ordinance at the stake. Pest witnessed a set of disturbances, and Batthyány tendered his resignation in protest.

The Council of State retreated on 30 March and only insisted on the palatine’s immunity, only granted to the incumbent palatine, and on the monarch’s exclusive right to appoint officers and decide on the army’s foreign missions. The document was read out aloud at the diet of 31 March in Bratislava, in the midst of ovation.

Batthyány submitted the list of his government members to the palatine on 2 April, and the monarch signed the document on 7 April in Vienna. In the evening hours of 10 April, Ferdinand I and his wife arrived in Bratislava aboard a steamer.

The government members who were in Bratislava at the time (Batthyány, Kossuth, Széchenyi, Deák and Pál Esterházy) were sworn into office the next morning. Thus, Hungary’s first government responsible to the diet alone took office.

Among his first measures, Batthyány instructed the authorities in a circular to proclaim the emancipation of serfs without delay, even before royal assent.

It is of symbolic importance that he was sworn in as prime minister on 11 April, the day when the revolutionary laws earned the royal assent. Our first Prime Minister is credited for setting up the home guard and the first ten battalions.

As a consequence of the historical events, Batthyány stepped down on 10 September, and retired to his castle in Ikervár. He was arrested in Buda on 8 January 1849, and was later held prisoner in Bratislava and Olmütz. He was condemned to be hanged for high treason, but his sentence was later modified to death by shooting.

He was executed on 6 October 1849 in downtown Pest, now marked by a sanctuary lamp.