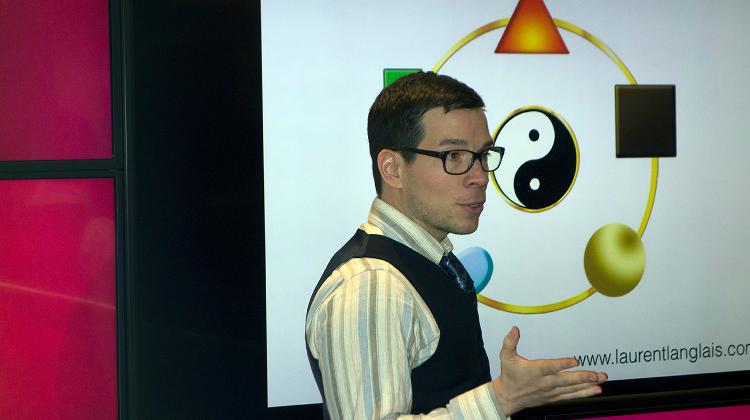 Laurent is French born and raised, and his accent is still here to prove it. Fascinated by cities and the metaphysics from an early age, he always wanted to explore urban reality 2.0. After having worked as a computer artist creating virtual worlds, he left this creative but hectic profession to travel the world and ended up spending much time in Asia. This is where he found his true calling as a lifestyle consultant, specialized in Feng Shui and Chinese astrology. Learning this methodology from historical Asian lineages has been a fascinating journey in combining architecture, design and metaphysic: a stunning example of this practice is the Forbidden City in Beijing. His work is nowadays to understand why some places support our lives and some work against us, and to fix them. He likes to define his work as acupuncture for architecture.

He has been consulting internationally for home and business for the past 9 years and has been featured on the BBC. He is accredited by both the Feng Shui Society UK and the International Feng Shui Guild. Through his work, he is helping people to get the life they want by getting to know their personal timing and by reworking their personal and business environment; as well as assists in redesigning homes, apartments and commercial buildings. He has moved to Hungary this year after having spent years in the U.K and now develops his consultancy both locally and internationally, being between Budapest, Paris and London.

You can find his monthly blog with Feng Shui advice and world predictions on his site www.laurentlanglais.com or in French on www.fengshuienfrance.fr

1. When did you arrive in Hungary and what brought you here?
This year I decided to do a tour of Europe to choose a new base, as I was not too happy with the rat race and costs of London anymore. Surprisingly, 2015 was my first time in Budapest, which until then was in my mind a nice song from George Ezra and a photogenic European capital city. I fell immediately under its charm – how can you not - and came back in June to spend time to soak in the thermal baths. Eventually my top 3 European cities became Berlin, Lisbon and Budapest. After having spent a month in Berlin this summer, and partying a bit too hard over there, I realised that it was not my ideal scene and that I was already missing Budapest a lot. As soon as I came back here I felt that it would be home. My reasons were numerous: the cost of living, the pace of life that is slower, the stunning architecture and generally seeing that I’ll get a much better quality of life here than in London and Paris, which are my main business hubs. It is also easier for me to focus on writing my books here and hopefully the first one will be out next year.

2. Have you ever been an expatriate elsewhere?
Absolutely. I have lived in the UK, in Canada (both in Montreal and Vancouver), in New Zealand (Wellington), in Spain (Tenerife) and Malaysia (Kuala Lumpur) where I learned my work. I am a traveller at heart and couldn’t get enough of those life experiences a few years ago. Now I have slow down a bit and wanted a good base in Europe.

3. What surprised you most about Hungary?
The architecture of Budapest. As a fan of the art nouveau period, I am like in a candy store here and every streat reveals some wonders. Try Izabella Utca for example! And the beauty of people: Hungarians have a natural elegance. As for the language, it has to take the crown for the surprise factor: nothing like it on this planet really.

4. Friends are in Budapest for a weekend - what must they absolutely see and do?
One or two of the baths: I’d recommend Gellert for the building and Rudas for the rooftop Jacuzzi. Then I’d say Buda hill which is great walk and the stunning museum of applied arts, Iparművészeti Múzeum. Ödön Lechner was an architectural genius and the world needs to know! In the evenings I always take my friends to the spectacular Brody Studios, for which I have just completed the Feng Shui analysis. What a stunning building and design!

5. What is your favourite Hungarian food?
A nicely prepared goose liver is an amazing dish here.

6. What is never missing from your refrigerator?
Cheeses of course, being French. I find good hard cheeses here in the farm shops but miss some of the French soft ones, although grilled Camembert seems to be a staple!

7. What is your favourite Hungarian word?
I know very little so far, but emelet amuses me a lot as it is so close to the French omelette.

8. What do you miss the most from home?
The language I suppose. I am often like a fish out of water here with the culture. I don’t miss the strikes and here if people complain like the French often do, I wouldn’t understand it: silver lining!

9. What career other than yours would you love to pursue?
Architect, urbanist, or travel writer. Or anything that involves petting and feeding squirrels.

10. What's a job you would definitely never want?
Butcher, as well as Donald Trump’s personal assistant.

11. Where did you spend your last vacation?
Amsterdam. I had quite a few epiphanies about urbanism over there…

12. Where do you hope to spend your next one?
Istanbul and Paris will be in December. I am very excited about visiting Istanbul with my Turkish friends.

13. What was your favourite band, film, or hobby as a teen?
For the band, Blondie is my favorite ever. They have released two new albums in the past few years and Debbie Harry is still rocking; what an amazing woman. For movies, it would be a close call between Batman Return, Cloud Atlas and the Matrix trilogy. As for a hobby, that was petting any animal that is happy with this and I still do it!

14. Apart of temptation what can't you resist?
The go back on the road for another trip.

15. Red wine or white?
White, but I seldom drink. Reason why they kick me out of France I believe…

16. Book or movie?
It would be movie these days, because it requires less intellectual work after my work; especially if it’s a Hollywood blockbuster.

17. Morning person or night person?
Definitely night over morning, but I try to slowly change that. The joy of being my own boss…

18. Which social issue do you feel most strongly about?
The unethical treatment of animals in factory farming is a disgrace for humanity.

19. Buda side or Pest side?
While I love the time capsule feeling of Buda, I am always drawn back to Pest. With my work as a Feng shui consultant, I can see and feel how the two sides have a different energy due to the placement of hills and the Danube. Feng Shui actually analyses the macro before the micro environment. Buda is slower and more grounding and there is a reason why the most expensive districts are found over there, property-wise. However Pest brings more excitement for me. Buda will be for a cozy house later on.

20. What would you say is your personal motto?
Life is an adventure as well as a spiritual journey: never lose this perspective.