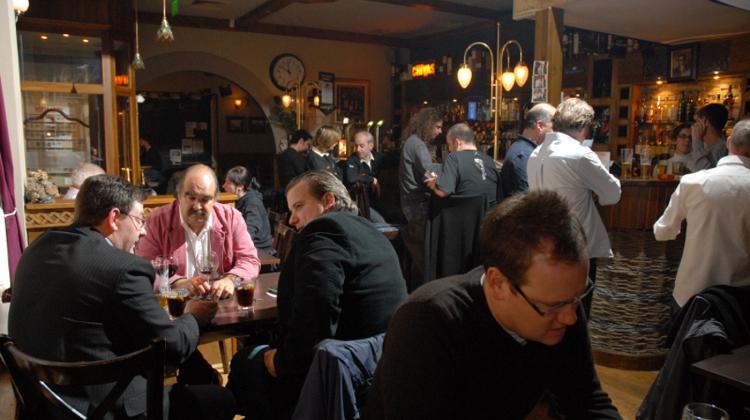 Fresh news is that The Caledonia must close on the 4th of March for two months, apparently NAV has just contacted the pub's owners saying they made an "administrative mistake" about the closing date of 3 January. All related appeals by the pub were rejected regarding this punishment, and the authorities insist on closure since two bottles of the same spirit were open behind the bar, and inspectors found alcohol in the kitchen area. This issue made the national TV news, you can find footage of that below (in Hungarian).

The Caledonia in the 6th district of Budapest has been ordered to close its doors for 2 months, following an inspection from the Hungarian customs authority. The infringments that have led to the heavy handed punishment have left co-owners Patrick McMenamin and Zsuzsanna Bozo bemused.

"We have been informed that we cannot have two bottles of the same spirit open behind the bar and that we cannot have alcohol in the kitchen area, even though we use whisky for cooking”, explained Zsuzsanna. "We weren’t even aware of the law that prevents bars having two bottles of the same spirit open and ready to serve. For us that seems like a business decision that helps improve customer service. We don’t see why this would be illegal.”

The Caledonia is no stranger to confrontation with the authorities. The pub led a successful campaign recently to prevent all bars in the 6th district being closed by 10pm. The bar was also fined 10 000 Ft in 2010 for its part in the expat musical fundraising event to assist those living and working in the areas affected by the unprecedented, catastrophic toxic mud spill on October 4, 2010.

“We offered to set up and run a bar at the event to help raise some extra funds”, explained Patrick McMenamin. “My staff worked for nothing and all the sales proceeds went to charity.. I simply didn’t realise you had to give at least five days notice of an outdoor event. I only gave three.”

Over the past six years of operation Caledonia customers have raised hundreds of thousands of forints for local charities, including The Robert Burns International Foundation, the orphanage at Göd and support for the development of youth rugby.

Regulars at the bar are clearly shocked to hear that their favourite watering hole will close throughout October and November. “It’s not just a place that serves great, beer, whisky and food, says Neil Watson, “ but somewhere you can always meet someone for a friendly chat.”

Other bar owners were also quick to condemn the punishment, but again asked not to be named. “It makes no sense whatsoever. The Caledonia has been a welcome and hugely important addition to the bar scene in Budapest since it first opened 6 years ago. I know for a fact that they make every effort to do everything by the book. Sometimes you have to wonder if Budapest really does want businesses to succeed.”

The owners of The Caledonia were unable to comment on what the long term impact might be and if indeed the business can survive a closure at this time. “These are traditionally our busiest months in the lead up to Christmas. We will do what we can to support our staff and suppliers during this period.”

The Caledonia was voted the Best British Bar in Hungary by The Telegraph newspaper, won a Time Out award for Best Burger and has been awarded Silver status by The Whisky Magazine for the quality of its whisky selection and service. The Caledonia also sits at 32 out of 971 places in Budapest recommended by TripAdvisor.
Clearly not good enough by Budapest standards.