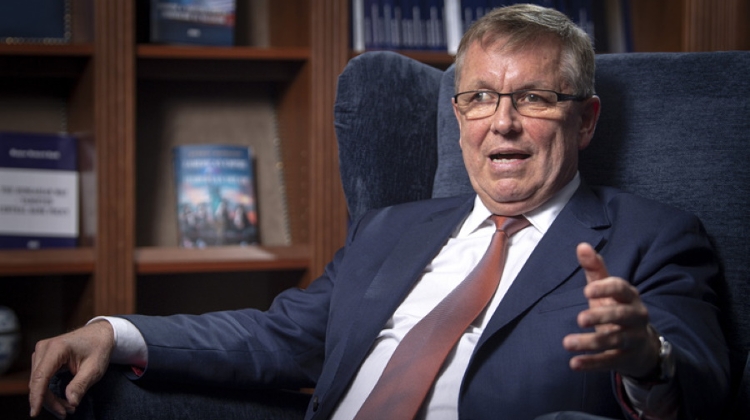 The National Bank of Hungary will protect the country’s achievements of the past ten years, central bank governor György Matolcsy said in an interview to MTI, insisting that the Hungarian economy was “on the brink of great opportunities”.

The level of uncertainty in the global economy makes it hard to predict economic developments, Matolcsy said, adding, however that the central bank’s package of measures aimed at mitigating the economic fallout of the novel coronavirus outbreak and the government’s stimulus measures gave Hungary a sound basis for maintaining a growth rate that is 2-3 percentage points above the European Union average.

“We continue to believe that the Hungarian economy can achieve a V-shaped recovery,” he said.

Matolcsy praised Hungary’s economic achievements of the past ten years which he said had helped “bring the country back from the edge of a cliff”.

He said the central bank had prepared “effective targeted measures” in order to protect Hungary’s economic stability amid the current crisis.

The measures, he said, “must help both those in need and those even capable of overtaking others in the turn, thereby laying the foundations to restart the economy”.

The measures implemented by the central bank and the government have required careful thought and planning, with both entities using all the tools available to them, he said.

“Small and medium-sized businesses are the backbone of the Hungarian economy,” Matolcsy said. The central bank’s new programme dubbed Funding for Growth Scheme Go! will encourage all economic players to return to the economy, he said, adding that “the Hungarian economy is indeed on the brink of great opportunities.”

He said the central bank is continually pumping liquidity into the banking system.

The governor said Hungarian public debt financing should largely rely on domestic players and forint financing as the best way of ensuring economic and financial stability.

When policymakers meet on April 28, a decision will be made about the terms by which mortgage bonds and government securities can be purchased on the secondary market, he added.

Matolcsy noted Hungary’s record-low base rate and strict macroprudential rules, adding that the loan portfolio built up in the recent past was long term and sustainable.

Commenting on criticism of its loan schemes for micro and small and medium-sized enterprises, he said the central bank returned to “a proven recipe” for strengthening the SME sector that was maintained between 2013 and 2017, when around 40,000 firms received 2,800 billion forints on favourable terms, boosting GDP by 3.5% as a result.

“In addition, we are providing the economy with 3 trillion forints of new resources, more than 6% of Hungarian GDP. We’re confident in the strength of the Hungarian economy … just economic players can trust in the success of the measures taken so far,” he said.