21st Budavár Wine Festival Gets Off To A Popping Start 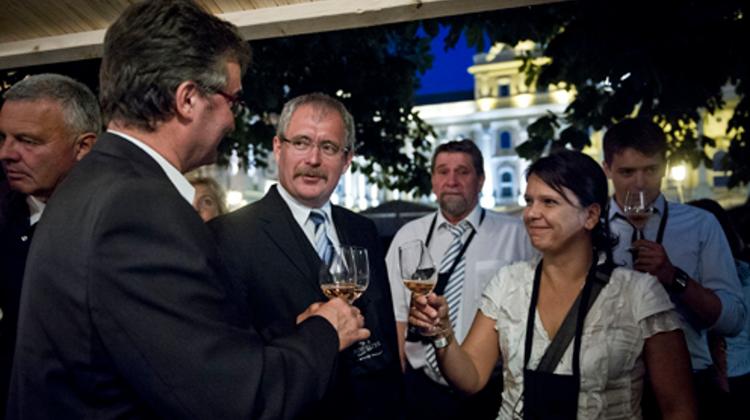 Minister for Rural Development Sándor Fazekas officially opened the 21st Budavár Wine Festival with bottle no. 1 of the limited edition Törley 130 Rosé Brut Nature champagne from the Törley Pezsgőpincészet champagne cellars, made especially for the company's 130th anniversary. "The wine sector contributed 67.5 million forints to the profits of Hungarian agriculture last year", said the Minister. The great celebration of wine awaits visitors from Wednesday to Sunday with the wines of some two hundred vineyards; this year's guest of honour is Croatia.

"A host of noted wine producers have again brought along the best of their 'divine nectar' to the Wine Festival", said Sándor Fazekas in his opening speech, reminding those present that "Parliament has recently adopted the amendment of the Wine Act, thanks to which administration and product introduction fees will decrease even further."

As noted by the Minister for Rural Development, the Ministry is earmarking 13 billion forints for the development of vineyards, as their renewal is a matter of national importance.

The guest of honour of this year's Budavár Wine Festival is Croatia, the home of Plavac mali, Malvazija and Graševina. 100-120 different Croatian wines await visitors to the festival; no guest at the festival has ever been represented by such a huge array of wines.

"It's a great challenge to present ourselves after last year's guest of honour, the wine superpower France", noted the temporary spokesman of the Croatian Embassy. According to Silvia Malnar, 31 varieties of grape are cultivated in Croatia within a relatively small production area. "Since Croatian wines are not available in Hungary, the Budavár Festival is an excellent opportunity for the Hungarian public to become better acquainted with Croatian wines before their next holiday in Croatia", stressed the Croatian diplomat.

According to Zoltán Zilai, director of Viniculture Nonprofit Co., "Hungarian wines have achieved significant international success during the past year, but the real fight for consumers is happening on the Hungarian market. One of the important stages of this fight is the Festival, where visitors may become acquainted with an extremely wide spectrum of domestic sine production."

In addition to the Carpathian Basin's best known wine producers, 28 young vintners from the county's 28 wine-producing reigns who are committed to producing high quality wines will be offering their wines to the public in the Lion Court during the course of the five-day gastronomical event, in cooperation with Junibor, the Association of Young Wine Producers. So for example in addition to the wines of well-known producers such as Attila Gere, Ede Tiffán, Péter Vida, Sauska, the St. Andrea vineyard or Tokaj Oremus, visitors will be able to sample the products of emerging young wine-makers such as Ákos Kamocsay, János Bolyki, Angelika Árvay, Tamás Hernyák and Andrea Gere.

As always, in addition to wine tasting culture will also play an important role in the Festival, and especially music: visitors can enjoy performances from among others the Csík Zenekar, György Ferenczi and the Rackajam, Besh O'droM and Ghymes, all well-known proponents of folk music. Hungarian Jazz Day will take place on Sunday with the participation of the Hungarian Jazz Association.

Saturday is traditionally the day of the folk music and folk dance gala, and is also the time for the harvest parade in which fold dancers, folk groups, and the members of wine orders and wine appreciation societies take part.

This year is the first time that the Hungarian National Gallery is also contributing to the programs offered at the Budavár Wine Festival, and is providing a free creative workshop and child-minding service every day during the Festival's opening hours until 6pm for all those who arrive at the Festival with their children.

The detailed programme of the Budavár Wine Festival may be found on the festival's webpage, www.aborfesztival.hu.*

Source: Press Office of the Ministry of Rural Development - kormany.hu