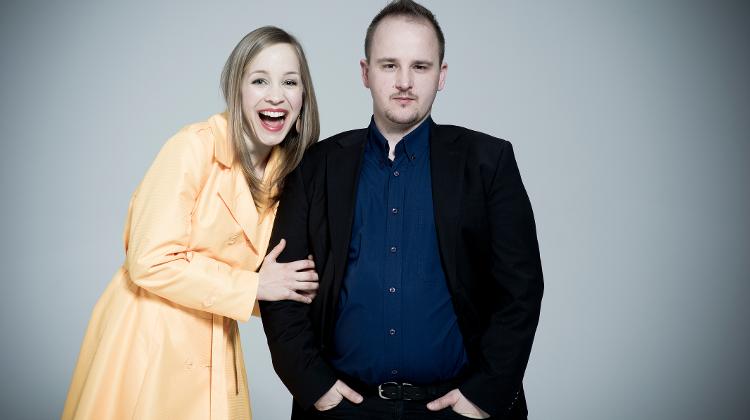 Columbus Jazz Club  - This musical pleasure boat is permanently docked on the Pest bank, where numerous Hungarian groovers come aboard to perform before a backdrop of stunning riverscape vistas.

If Kávézó - An artistic vibe envelops guests at this intimate hangout on hip Ráday Street, with contemporary paintings on the walls and creative players jamming in varied styles almost nightly.

Ladó Café - Among many notable groups gracing the stage at this classic city-center cabaret serving dinners of traditional Hungarian cuisine, the Hot Jazz Band appears every Wednesday at 8pm.

Listen to heartfelt tunes from a new album of sensuous sounds by the Hungarian jazz duo formed by darling songbird Veronika Harcsa and guitarist Bálint Gyémánt - pictured above -  performing in a massive concert hall.

This outré Belgian outfit for experimental big-band tunes rocks the boat with intriguing cacophonies of blasting horns and hard-driving guitar rhythms, enlivened by jags of accordion and vibraphone.

Feel that ring-a-ding-ding thing when Magyar showman Gábriel Gábor Farkas sings swingin’ hits by the Chairman of the Board and his Rat Pack cohorts, staged amid a deluxe lounge with dinner available.

As a post-bop pioneer who performed with scores of musical greats over the past four decades, avant-garde American guitarist John Abercrombie constantly experiments with the future of progressive jazz.

Hear the spirited piano artistry of unconventional German composer and professor Maria Baptist as she performs contemporary big-band music with the Budapest Jazz Orchestra in a recently renovated venue.

Since 1957, this globe-trotting Magyar ensemble plays classic melodies of old-time New Orleans along with unpredictable arrangements of varied music styles – hear them live at the group’s own cabaret.

Sultry Hungarian songstress Adél Csobot takes guests back in time with a passionate revue featuring exuberant renditions of jazz standards from the 1930s and ’40s to today, accompanied by a live band.

Courtesy Of Where Budapest Magazine