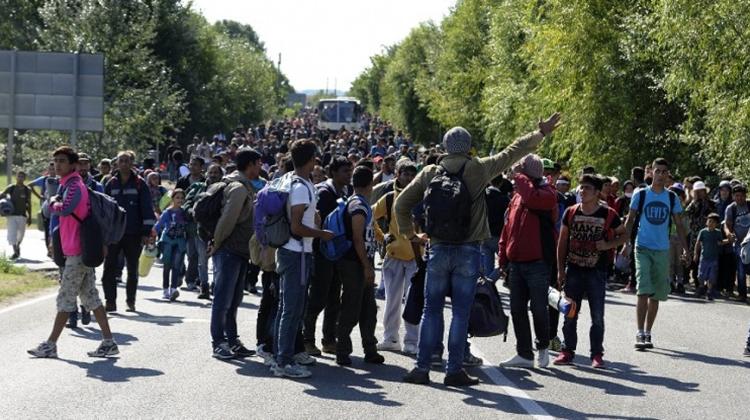 Hungarian Police used tear gas against a group of migrants that refused to go to a collection point after entering Hungary, and two people were detained near Röszke in southern Hungary late on Tuesday, a local MTI correspondent reported. The group of around 150 migrants set off towards Highway 5 after entering Hungary from Serbia.

Police used tear gas to prevent the migrants from joining another group of migrants that had left the collection point earlier in the evening. Around 50 migrants, mostly families, eventually accepted the police’s request and got on buses that transported them to the collection point at Röszke.

Police had used interpreters to convince people that they need to register after arriving in Hungary. Many in the crowd were chanting “No camp” and “Budapest, Budapest”. Highway 5 was closed off by around 100 police who formed a line. Csongrád County police said in a statement that two rabble-rousers were lifted from the crowd and detained for disobeying police orders.

The statement added that tear gas had been used because the migrants were throwing plastic bottles at the police. An ambulance had to be called to someone who fell ill but this was not linked to the use of tear gas, police said.

Earlier on Tuesday a group of 200-250 migrants left the registration point near Röszke, near the Serbian border, on Wednesday morning, MTI’s correspondent reported. The group, composed mostly of young men, pushed past the lines formed by police and set off in the direction of motorway M5 leading north.

They were joined by families and women later on. No tear gas or batons were used by police. Police were seeking to stop the migrants at a point along the highway. With the help of interpreters, they planned to ask migrants to board 20 buses with 1,000 places and transport them to reception centres in the early afternoon.

In the meantime, several groups of migrants continued to cross into Hungary to reach Röszke by walking along rail tracks in the morning.

Several Hungarian and international aid organisations started distributing aid at Röszke on Tuesday but their operations so far have been haphazard, the correspondent said.

Several of the migrants took the food and baby sanitary supplies back to the Serbian side of the border to support their family members waiting there.