An Advent Walk In Budapest 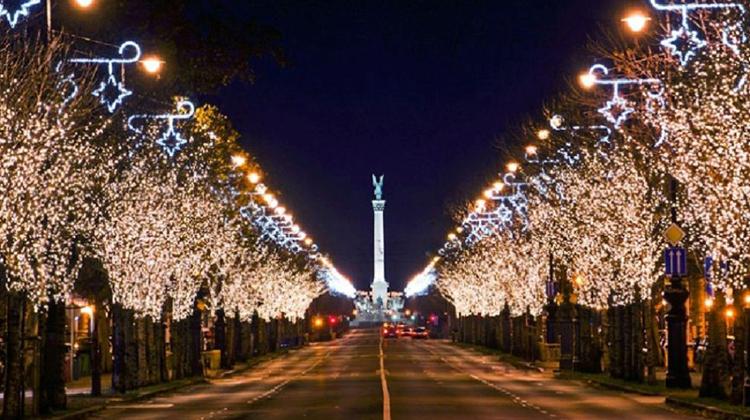 As Christmas approaches, during the Advent season – with the help of colleagues at BDK Budapesti Dísz és Közvilágítási Kft – our beautiful capital city will once again be covered in holiday lights. A short walk will lead you to all of the most ornate locations in the city. Starting from the oasis of lights at Városháza (City Hall) park and walking to the Opera through Vörösmarty tér, Erzsébet tér, József Attila utca, the Basilica and Andrássy út, the entire walk is a mere two kilometres long.

his year, there is the winter festival and Christmas Fair in Városháza park, featuring various interesting weekend programmes during Advent in addition to the regular vendors there.

On the first Sunday of Advent, there will be a festive lighting of candles, and meanwhile, the Christmas lights around Budapest will be simultaneously lit. Deputy mayor Dr. Gábor Bagdy will light the first Advent candle during the festive opening on 27 November at 5 p.m., which shall be the signal for the Christmas lighting in Budapest.

Walking along Deák Ferenc utca from Városháza park, you can reach the Budapest Advent and Christmas Fair in Vörösmarty tér, one of the top 10 among the most beautiful fairs in Europe.

The fair in Vörösmarty tér attracts visitors with artisan gastronomical and applied arts products as well as its festive programmes. Everything on sale is exclusively hand-made, selected by a professional jury based on strict standards of quality.

Away from the bustle of the fair, you can also take a peek at Váci utca and at the atmospheric starlight above the streets.

From Vörösmarty tér, walk through Erzsébet tér, and then take either Október 6. utca or Sas utca to reach the also very popular Szent István tér Advent Arts and Crafts Fair, located in front of the Basilica, the principal downtown meeting point.

There is a free ice skating rink open every day for children up to age 14, with skate rental available, and skating classes during weekends for the little ones. Every day after sunset, the Basilica’s facade is covered in exquisite lights, which is one of the greatest 3D light shows in Central Europe. A series of cultural programmes, arts and crafts workshops and surprise concerts await visitors on the square.

Walking on along Andrássy út in a wonderful light tunnel takes you to the Opera, where the Nutcracker Festival shall once again take place between 1 and 30 December.

The festival will feature 26 performances by the Hungarian National Ballet, more than ever before, from Tchaikovsky’s masterpiece. The festival opens on the first Advent Sunday with the traditional concert by the Hungarian State Opera House’s Children’s Choir, accompanying the busy fair, choral concerts and fundraising events.

Taking the Millennium Underground at Opera will bring you to the City Park Open Ice Rink, where you can skate in front of Vajdahunyad Castle as part of a true Advent programme, or you can also go back to your starting point, Városháza park and have a glass of mulled wine. We wish you a pleasant stay!