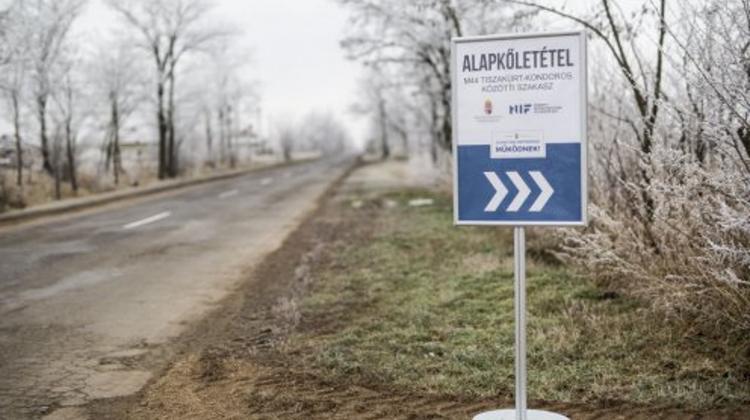 The construction of section of the M44 between Tiszakürt and Kondoros on Wednesday marks the beginning of development of the 2x2 lane dual carriageway.

“The full construction of the approximately 120 km stretch of road between Békéscsaba and Kecskemét by 2022 will cost an estimate HUF 327 billion net, of which the cost of the 61 km section now under construction is HUF 144 billion”, the Ministry of National Development’s Minister of State for Transport Policy, László Tasó said in Kondoros on Wednesday before laying the foundation stone of the new road.

Mr. Tasó pointed out that the entire investment was financed from the country's own resources because it was not backed by the European Union. “The project is being realised thanks to the efforts of Hungarian people and this way we can achieve the Government programme to enable every county seat, including Békéscsaba, to be connected to the country’s expressway network“, he said.

The region’s Member of Parliament and Development Commissioner for Békés County, Gyula Vantara, emphasised that the commencement of the project represents the realisation of an old dream for the region’s inhabitants, which will enable more capital to flow into Békés County, which in turn allows for a better living for the people living here.

Béla Dankó, Member of Parliament for election district No 2 of Békés County, also spoke about opportunities, explaining that last year 2 500 fewer children were born in the county than the number of deaths, while thousands of people have migrated from the region. The MP expects the construction of the new road to eliminate Békés County’s competitive disadvantage.

Communications Director of National Infrastructure Development Cls. Dániel Loppert told reporters that when the whole road is complete the journey time between Békéscsaba and the M5 motorway will be reduced by 45 minutes, and residents of Békéscsaba will be able to reach the capital in 2 hours and 10 minutes.

The construction has been split into three phases and is being performed by a consortium of companies comprising Duna Aszfalt, Hódút, Euroaszfalt, Swietelsky, Solt út and A-Híd.