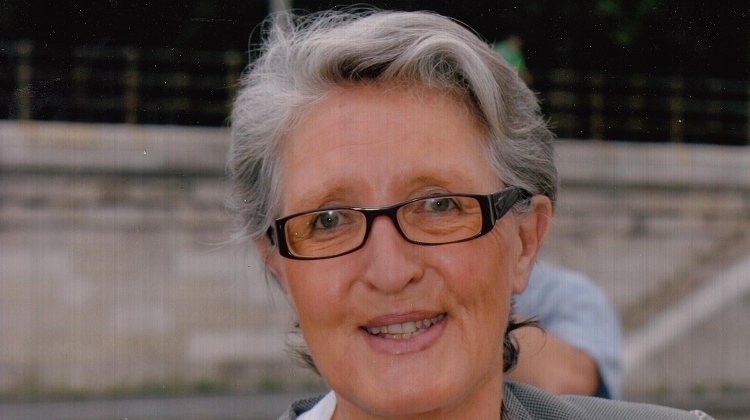 Anne Zwack was born in Britain in 1946 but has lived nearly all her life as an expat. She met her husband, (the late) Peter Zwack, of the Hungarian distilling family while working in Milan and they moved back to Hungary in 1988.

Together they raised two children, Sandor and Izabella Zwack, both of whom work in the family business. Back in the seventies and eighties Anne was a journalist working for American publications like Travel & Leisure, Food & Wine and the travel section of the New York Times.

Anne also wrote a number of guide books and in 2006 she published her first novel, “The Diplomatic Corpse”.

1. When did you arrive in Hungary and what brought you here ?
I first came to Hungary in 1987 when I was doing an article on Budapest for Gourmet Magazine. While we were there, Peter entered into negotiations to start a Joint Venture with his old Unicum factory and before we knew it the whole family with four dogs, a Persian cat, due Abyssinian guinea pigs, a wayward pony and a mynah bird were all living in Hungary.

3. What surprised you most about Hungary?
I have been amazed over the years by the incredible changes that Hungarians have succeeded in bringing about in every aspect of their daily lives since 1989.

4. Friends are in Budapest for a weekend – what must they absolutely see?
Apart from the more obvious sights, on Saturday morning I would take them to the Ecseri Piac flea market where we could have delicious goulash soup for lunch in the basic little bistro there. On Sunday to a sung mass at the Matthias Templom. You do not have to be religious to be transported by the ethereal quality of the music and the pathos of the Anthem at the end. Afterwards a cake and coffee at the Ruszwurm coffee house. I would definitely take them to the extraordinary Ludwig Museum.

5. What is your favourite Hungarian food ?
I think Hungarian soups are the most varied and delicious in the world. When we were ambassadors in Washington our chef never made exactly the same soup twice.

6. What is never missing from your refrigerator?
A ginger root, tejföl, fruit for my parrots and Peter’s smelly cheeses.

7. What is your favourite Hungarian word ?
Satöbbi, pronounced Shutterby, meaning et cetera. You have to say it twice: satobbi, satobbi. I liked it so much I called our rough haired vizsla Satobbi and my daughter Izabella’s dry white wine has a picture of the dog on the label. (Again, delete if you think it’s too self promoting)

8. What do you miss most from home?
Our house in Tuscany looks out over vineyards towards the sea. A landlocked country always seems to me like the middle seat on the aeroplane.

9. What career other than yours would you love to pursue?
I see myself as a clown in a children’s hospital. In the meantime, my daughter and I run a bar and ice cream parlour in our little village in Tuscany.

10. What’s a job you would definitely never want?
A politician.

11. Where did you spend your last vacation?
Bombay.

12. Where do you hope to spend your next holiday?
At home in Tuscany.

13. What was your favourite band, film, or hobby as a teen?
I was a very unimaginative child. In the early sixties, I refused a ticket to a Beatles concert because I said it was a phenomenon without a future.

17. Morning person or night person?
I come into my own at lunch time.

18. Which social issue do you feel most strongly about?
I cannot bear closed minds, the lack of empathy and curiosity which causes prejudice.

20. What would you say is your personal motto?
It is clumsy but here we go:
If I give you a pogacsa, then you eat the pogacsa and I don’t, but if I give you an idea or you give me an idea this is something we can both keep for ever.