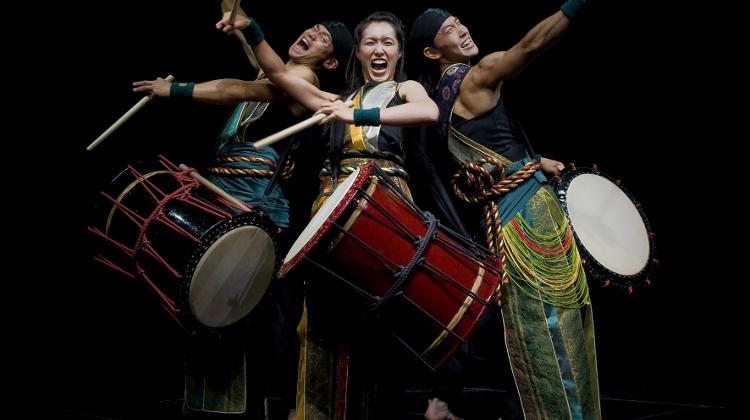 Japanese Taiko drummers’ group “Yamato” was formed in Yamato-no-kuni (country of Yamato), now known as Nara prefecture in 1993 by Masa Ogawa, and has its headquarters in Asuka village in Nara, which is known for many ancient monuments and usually mentioned as the birthplace of Japanese culture.

Since then they have made 2000 performances in 45 countries in the world, their total audience reached two million worldwide. Yamato’s international debut (and the first signal success) was in 1998 at the Edinburgh Festival, where the group won the "Spirit of the Fringe" award.

Life of the drummers

The members of the Yamato live together, eat together –they do everything together. Drummers have a very special daily routine: they get up at 7am, run 10 kilometres, do weight training, then they practice drumming and prepare for the next concert – usually until midnight.

They spent six to ten months in a year abroad: it sounds great but actually it is quite hard. Of course, there is no time for sightseeing, they are rather familiar with the hotels and back-stage areas of the theatres. But it worths: more than 300,000 people from lots of counties come to see them every year.

The drums made of animal skin and ancient tree, some of which are more than 400 years old. We hear their sounds with our heart. They resemble heartbeat: the centre of life and the source of power. The sounds of the taiko is like the strong heartbeats of a lonely runner with powerful body. Of course it is not demonstration of strength, the shows mix traditional percussion with humour and acrobatics.

What you feel when surrounded by the sound of Wadaiko, is what Japanese call “Tamashy”, which can be translated as soul, spirit - the basic element of life. Invisible and intangible, but it’s existence is certainly felt. The pulse of antiquity resonates within all the bodies gathered at the theatre. Yamato’s performance aims to be the celebration of life.

In 2010, Yamato is on a European tour with the new show: Matsuri Fiesta! and we are glad to announce, that the group is coming to Budapest in April! After several shows (and riots) in Budapest and in Debrecen, the group is a sensation also in Hungary. Explosion of energy and humour is guaranteed, as their motto is: “Go anywhere if invited and make the world a little more happy.”