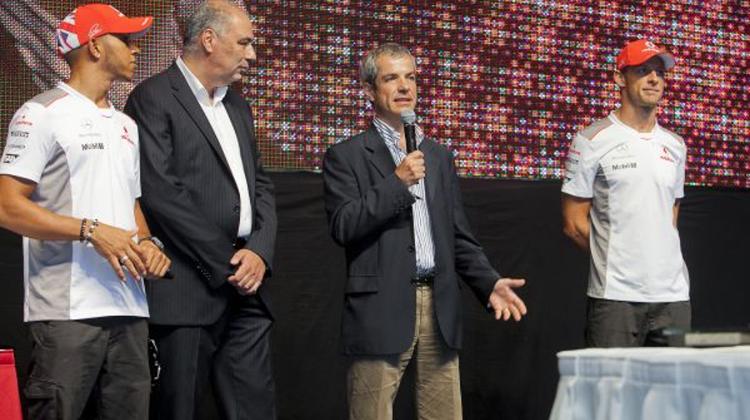 The event held by HUGO BOSS and Vodafone Hungary in downtown Budapest on Thursday evening celebrated the 8th anniversary of the HUGO BOSS fashion store in Hungary, the closure of the Vodafone Start Something New campaign held between 28 April and 1 May, and the start of the Hungarian Grand Prix. The two world champion drivers from the Vodafone McLaren Mercedes team, Lewis Hamilton and Jenson Button attended an event together in Hungary for the very first time.

Hundreds of people gathered on Fashion Street, in the heart of Budapest on Thursday evening for the special event organized by HUGO BOSS and Vodafone Hungary, where Lewis Hamilton and Jenson Button attended as special guests. Although the two drivers from the Vodafone McLaren Mercedes team separately attended events before in Hungary, this is the first time that they greeted their fans together. They even prepared for this special occasion with a stage performance: Lewis Hamilton showed the audience his driving talent with the race simulator that was set up for this evening only, meanwhile his team mate, Jenson Button commentated his moves.

The Champions Duo also celebrated together the 8th birthday of the HUGO BOSS store in Hungary, for which the organisers even prepared a special, Formula One shaped cake for them.

The highlight of the Vodafone Start Something New Weekend, organised between 28 April and 1 May, was the Vodafone Downtown Grand Prix on 1 May, where Jenson Button, 2009 world champion and driver of the Vodafone McLaren Mercedes team drove through downtown Budapest with a speed of close to 200 km/h between the Basilica and Parliament. The weekend was a huge success, there were close to 100,000 people cheering for Jenson Button’s downtown speed record and the motorsport show performed by the drivers of Hungaroring. The event was seen by 2, 1 million more people through the live broadcast of m1, and 43,000 others who followed Vodafone’s exclusive online streaming.

„We are very happy that we could celebrate together with the two drivers of the Vodafone McLaren Mercedes team the closure of the Vodafone Start Something New programme, the biggest and most successful Formula One campaign ever organised by Vodafone Hungary.” – said Diego Massidda, CEO of Vodafone Hungary. „The reason of the weekend was the brand new network that we delivered back in April, which brought broadband internet to 9, 5 million people in Hungary. I believe that the attendance of the two world champion drivers of the Vodafone McLaren Mercedes team at last night’s party symbolises perfectly the quality of Vodafone’s brand new network.”

The cooperation between Hugo Boss and McLaren has a history of over three decades, in which the fashion company mixes its high-tech styled Boss Black collection with the unique needs of Formula One.

The unique event and the attendance of the Champion’s Duo represent the successes of the HUGO BOSS brand and the Roland Fashion House. András Berendi, CEO of the Roland Fashion House is very proud of the fact that their guests and partners can celebrate the 8th birthday of the Hungarian HUGO BOSS store together with the two drivers of the Vodafone McLaren Mercedes team, Jenson Button and Lewis Hamilton. He added: „Besides Lewis and Jenson, the other Champion’s Duo is Vodafone and HUGO BOSS, as the two sponsors of the Vodafone McLaren Mercedes team have organised such an event for the very first time. We hope that we will have the opportunity to please our guests with similarly special moments in the future many more times.”

Hungaroring is one of the oldest of the 20 racetracks used today by Formula One: the first race organised here was in August 1986, and since then it has been a regular fixture on the race calendar. The drivers have to cope with an incredible heat on the 4,4 km long race track: the average temperature that has been recorded over the 25 years of racing is above 30C degrees, which easily becomes around 50C degrees in the cockpit. Despite of this, the Hungarian Grand Prix has very good memories for both the Vodafone McLaren Mercedes team, both the drivers, Lewis Hamilton and Jenson Button. Over the history of Hungaroring, it was McLaren drivers who took the most victories: up until 2011 they won ten times here.

“I have very special memories of Hungary.” – said Jenson Button. „I won my first ever Formula One race here in 2006. Last year I celebrated my 200th grand prix at the Hungaroring Circuit and after an eventful weekend, went on to win the race. Not only that, in May this year I was part of an incredibly special experience at the Vodafone Downtown Grand Prix, where I drove right through downtown Budapest at a speed of close to 200km/h, surrounded by beautiful buildings and cheered on by 100,000 people. Hungary will always be an exciting place for me.”

Lewis Hamilton won the Hungarian Grand Prix twice, in 2007 and 2009, and he has high hopes for this year’s race too. “The Hungaroring Circuit has been a successful track for the team over the last few years: we’ve won here ten times, which is more than any other team. As with every race, we come to the Hungarian Grand Prix ready to fight for a win and we’re definitely looking forward to the challenge of taking our 11th victory at this circuit.”