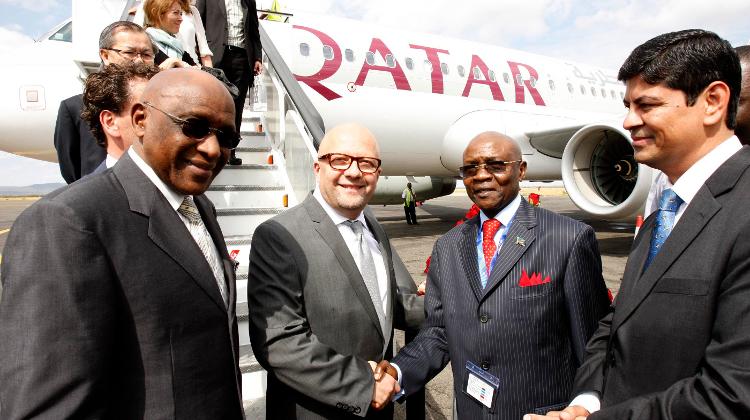 Qatar Airways has further expanded operations in Africa with today’s launch of daily scheduled flights to Kilimanjaro – its 18th gateway on the diverse Continent and second destination in Tanzania. Operating via the Tanzanian capital of Dar es Salaam, Kilimanjaro takes Qatar Airways’ global network up to 118 destinations and also marks yet another move by the Doha-based airline into underserved markets.

Flight QR546 arrived at Kilimanjaro International Airport to an impressive water salute performed by the local fire service. The arrival was followed by a colourful welcome by traditional Tanzanian dancers and an airport ceremony attended by over 80 people, including local dignitaries, airport officials, local and international media.

Qatar Airways Chief Executive Officer Akbar Al Baker said that Africa had been long under the radar of the company’s planning team as the region was highly underserved with a lack of international air services.

“Kilimanjaro signifies the importance Qatar Airways places in looking at airports around the world where capacity is limited, yet passenger demand is strong,” he said.

“We are pleased to be reinforcing our presence in Africa with the addition of scheduled flights to Tanzania’s tourism centre of Kilimanjaro, home to the infamous Mount Kilimanjaro, allowing us to further develop our business on the African continent.

“Kilimanjaro is an established tourist centre and is also fast emerging as a growing economic centre, thanks to its abundant wildlife, natural scenic beauty and natural resources. We have great confidence in the Tanzanian travel market ever since we launched flights to Dar es Salaam in 2007.”

Addressing guests at the airport ceremony in Kilimanjaro, Qatar Airways Chief Commercial Officer Marwan Koleilat said: “I would like to thank the Tanzanian government and officials at Kilimanjaro International Airport for the warm welcome and supporting our newest route launch.

“The exposure of Kilimanjaro to the world through Qatar Airways’ global network will enable Tanzania to attract even more tourists and businesses alike.”

The dynamic region of East Africa has long been the focus of Qatar Airways. The airline already has a successful operation to Dar es Salaam and Nairobi with double daily flights to both capital cities, as well as daily services to Entebbe in Uganda and the Rwandan capital Kigali.

Qatar Airways now operates 49 flights each week across four East African countries. The Doha – Kilimanjaro route is operated with an Airbus A320 aircraft in a two-class configuration of 12 seats in Business Class and 132 in Economy.

The airline’s African expansion will go a step further on October 31 with the launch of scheduled flights to Maputo in Mozambique, operating thrice-weekly from Doha via Johannesburg.
Qatar Airways has proved that it is a favourite among today's global travellers by recently winning a clutch of key awards – the most coveted Skytrax Airline of the Year accolade for the second year running, Best Airline in the Middle East for the seventh consecutive year and the Best Airline Staff Service award in the Middle East.

Since the beginning of the year, Qatar Airways has launched flights to Baku (Azerbaijan); Tbilisi (Georgia); Kigali (Rwanda); Zagreb (Croatia), Erbil (Iraq), Baghdad, and most recently, Perth (Australia) with many more destinations planned during 2012.

Over the next few months, Qatar Airways launches services to a diverse portfolio of new routes, including Yangon in Myanmar (October 3); Maputo in Mozambique (October 31) and a date yet-to-be-announced to the Serbian capital Belgrade.