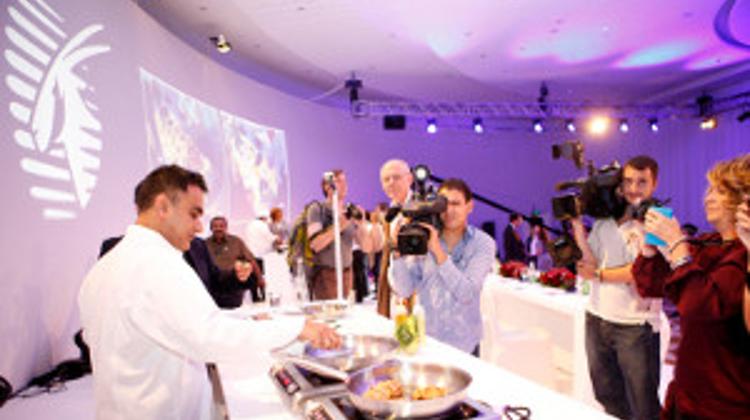 Handpicked to set a new standard for dining in the sky while representing the finest international cuisine from every corner of the world, the all-star team of culinary ambassadors has collaborated exclusively with Qatar Airways to create the ‘Qatar Airways Culinary World Menu’ – a new range of tempting signature dishes to satisfy the tastes of the airline’s discerning passengers.

Chef Ramzi, from Lebanon, brings his exquisite experience of Middle East cuisine to the fore; Mumbai-born Chef Vineet has his unique blend of exotic Indian food; Chef Aikens, from the UK, provides his own variety of European culinary offering; and Chef Nobu, from Japan, adds a touch of Asian fusion cuisine to Qatar Airways’ ambassadorial line-up.

The chefs were unveiled today at an international press conference in Doha, Qatar Airways’ hub city, where they delighted the gathered media with a live cooking demonstration of some of their favourite dishes.
General Module Image

“The imminent arrival of one of the most advanced aircraft in the world, our new Boeing 787 Dreamliner, heralds the start of an exciting new era for travellers worldwide and today’s introduction of a unique food offering is part of the overhaul of the entire travel experience for our passengers.

“Whether for business or pleasure, modern-day travellers want to arrive relaxed, refreshed and rejuvenated regardless of time zones or destinations. Yet as a truly global airline we understand that beyond superior service, travellers also want to enjoy the journey of discovery, exploring new tastes and cuisines.

“That is why we’ve travelled the world to assemble a team of culinary experts to offer our passengers the very best dining experience available in the sky,” added Al Baker, himself an admirer of food from different parts of the world.

Having been selected to create a unique and diverse menu for all international flights, the renowned chefs spent several months adapting and testing their specialities for Qatar Airways’ passengers.

Their menus have begun to be rolled out on flights to and from Doha International Airport.
General Module Image

The chefs took into account not only the flavours, textures, arrangements, aromas and tastes required for a memorable dining experience, but also how the taste buds are altered at 35,000 feet, and what types of food are most suited to long-haul flights.

The highly celebrated team consists of chefs that have gained a distinguished list of accolades including, multiple Michelin Star winners, multi-award winning authors, TV broadcasters, successful restaurateurs and even a Guinness Book of World Recorder holder.

With each chef specifically chosen as a master of their own local cuisine, Chef Ramzi Choueiri was chosen as the culinary ambassador for the Arab World. One of the most popular and widely recognised chefs in the Middle East, Chef Ramzi has brought Lebanese cuisine to the masses with a daily live TV cooking show with over 10 million television viewers.

Speaking at the press conference in the Qatari capital, Chef Ramzi explained his pride in being given the opportunity to work with Qatar Airways and the chance to take his unique style of Lebanese cuisine to the world.

“Since food reflects the traditions of a society, representing the Arab World, the home culture of the airline, is an exciting challenge and I’m extremely honoured to be involved. Arabic food is a melting pot between traditional recipes, new techniques and new methods so it’s always ready to be discovered whether you’ve grown up on traditional dishes or sampling for the first time,” he said.
General Module Image

The second member of the chef team is the internationally renowned and multi-award winning Chef Vineet Bhatia, the only Indian chef to have won two Michelin stars. Describing his passion for cooking while showcasing his signature dishes in Doha, Chef Vineet said: “My cooking comes from the heart.

“I believe in my food and I believe in what I do. As a child, I dreamt of being a pilot, so I jumped at the chance to work with Qatar Airways and share my passion with such an established and rapidly growing award-winning that is bringing a whole new travel experience to the world. My objective is to match the service with a 5-star dining experience.”

Internationally renowned chef Vineet Bhatia demonstrates his culinary talents in front of the international media at a press conference hosted by Qatar Airways.

“I want to give passengers that try my dishes onboard Qatar Airways an exciting taste sensation and a dining experience to be remembered by bringing together world-class service and world-class food. Qatar Airways is known for its service, setting new standards by innovating. I want it to be also known for its food through my culinary creations.”

The final member of the exclusive team responsible for Qatar Airways Culinary World Menu is Chef Nobu Matsuhisa – a culinary icon around the world, simply known as Nobu. With a reputation built over three decades for cuisine blending traditional Japanese cuisine with South American ingredients, Chef Nobu has earned two Michelin stars and the admiration of thousands that he has introduced to Japanese cuisine through his line of 29 restaurants in 25 cities, spanning across five continents.

Speaking in Doha, Chef Nobu explained the philosophy behind his cuisine. “I want to see those sampling my dishes eat, smile and laugh. To me this is happiness. Qatar Airways understands my philosophy. Working with Qatar Airways is an exciting experience and I look forward to having my food served onboard a 5-star airline that cares about the product and the service. Meals and dining are an important part of flying and it is an exciting new challenge to adapt my food to the service aboard their superb aircraft.”
General Module Image

At the launch of Qatar Airways’ Culinary Journey in the Sky global menus, in which the airline revealed its international panel of esteemed culinary ambassadors, media from around the world were flown into the Qatari capital for the special event.

The exquisite gourmet offering, already available on selected flights, will be introduced to passengers onboard the airline’s new Boeing 787 Dreamliner when the next generation aircraft starts flying in Qatar Airways’ colours in the coming months.