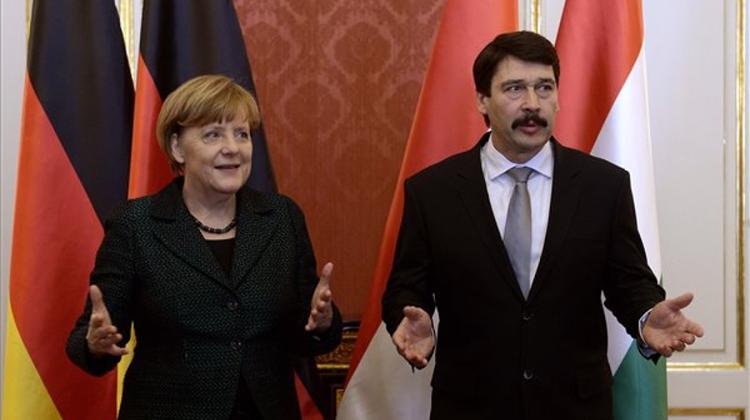 Hungary’s weeklies put Chancellor Merkel’s talks in Budapest on Monday and President Putin’s visit two weeks later in the context of Hungary’s position as a NATO member country that has consistently voted against sanctions against Moscow, while working on new joint projects with Russia.

On the cover of Magyar Narancs, PM Orbán and Chancellor Merkel hover in the sky, with Merkel as an angel over the head of the Hungarian leader, while three weeklies feature Merkel and Putin side by side on their covers. Demokrata shows them smiling at each other; HVG features Hungary’s map as a seesaw with Merkel and Putin sitting on two opposing ends, while the two exchange diffident looks on Heti Válasz’s cover.

In 168 Óra, László Kasza thinks Merkel is coming to Hungary to warn Mr Orbán of the consequences of what the author calls his anti-European foreign policy and anti-democratic domestic policies. He even suggests that Merkel might consider opting for Fidesz’s expulsion from the European People’s Party, although he hopes she will not go that far. Otherwise he interprets the summit as an attempt by the Hungarian Prime Minister “to break out from his diplomatic isolation”, since the only significant political figure to visit Budapest over the past four years was the President of China.

Magyar Narancs predicts that Hungary will not oppose further sanctions against Russia and in exchange Germany will abstain from criticising the government’s domestic policies. Looking into the reasons that may have prompted the Hungarian Prime Minister to invite President Putin shortly after Chancellor Merkel’s visit, the Magyar Narancs editorial suspects that in exchange for this friendly gesture, Orbán can count on cheaper Russian gas in the future. In its last remark however, the editor accuses the government of having “the darkest personal motives” for including today’s Russia among its strategic partners.

In Demokrata, Péter Bándy finds it absurd that representatives of the opposition should consistently criticise the government for daring to talk with Russia about economic cooperation. They should tune down there accusation that “Orbán is confronting Europe”, after Angela Merkel told the Davos World Economic Forum that the German government is ready to negotiate the creation of a free trade zone with Europe and Russia as partners, if Moscow helps settle the crisis in Ukraine. It will also become more difficult for them to say nobody is willing to talk with Viktor Orbán and that Hungary has been totally isolated, after the Hungarian Prime Minister receives two of the most important actors in world politics, Bándy writes.

In HVG, Béla Weyer suggests that both world leaders decided to pay visits to Budapest because Hungary is a weak link in the European Union. While the Chancellor, he says, intends to “restore the unity of the Union”, Moscow is following the principle of ‘divide and rule’.

The question is, he believes, to what extent Chancellor Merkel will manage to “immunise” Prime Minister Orbán against the potentially seductive offers the Hungarian side will face from Putin. Weyer believes Merkel wants assurances to this effect and in exchange she doesn’t mind if her visit is used by Mr Orbán for his own domestic political purposes. In another article on the same subject in HVG, István Riba remarks that if Hungary has to adhere to the common strict European attitude towards Russia, that will not be “a favourable introduction” to President Putin’s visit to Budapest.

In Hetek, Zsolt Hazafi believes that Hungary’s position on sanctions against Russia has undergone a thorough change since last September when the Hungarians side invited the German chancellor to pay a visit to Hungary. Last summer, Viktor Orbán was an “almost lone” critic of the sanctions, he writes (as a matter of fact, the leaders of Slovakia and the Czech Republic also expressed similar concerns).

At present, Hazafi continues, leading Fidesz politicians openly admit that Hungary fully shares the German view on these issues. He believes Merkel also plays the role of a go-between for the United States, so Washington does not have to communicate with Budapest directly to solve contentious matters with Hungary. “They just have to ask Merkel to convince the Hungarians”, Hazafi quotes an unnamed “international expert”.

In Heti Válasz, Botond Feledy writes that the Hungarian Prime Minister took a significant risk in agreeing to receive President Putin just two weeks after entertaining Mrs Merkel as his guest in Budapest. He claims inside information that the German Chancellery emphatically asked the Hungarian side to put Mr Putin’s visit to a later date, lest it “undermine the authority” of the Merkel visit. To compensate its failure to do so, Hungary might not oppose the transatlantic free trade agreement strongly favoured both by the United States and Germany, and will pay a visit to Kiev and meet President Poroshenko before the end of February.

In Figyelő, Edit Inotai suggests that the Hungarians were not in a position to oppose the Russian suggestion to hold the summit in mid-February. Putin has had an outstanding invitation to visit Hungary since Mr Orbán’s talks in Moscow last year. The Hungarian side did not expect him to come that soon and when he announced he would, it was impossible to say no.

His visit is embarrassing because the European summit decided last autumn to tone down political contacts with Russia in the wake of the events in Ukraine. Meanwhile however, other EU leaders have also dodged that limitation, including the Presidents of France, Finland and Austria, Inotai remarks.