Magyar Opinion: Can Momentum Keep Up The Momentum? 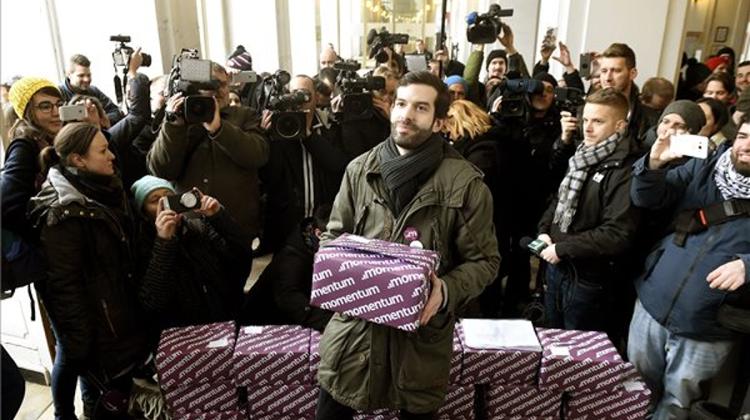 Most commentators believe that the governing forces will withdraw Budapest’s Olympic bid, after a new political movement collected almost twice as many signatures as necessary to back a referendum on the subject. They also ponder whether Momentum, after this spectacular success, will become a significant opposition force.

In his weekend Népszava editorial, Péter Németh predicts that Prime Minister Orbán will not want to engage in a lengthy battle over the Olympic bid, as he usually avoids confrontation whenever he encounters strong resistance. He has shown similar flexibility in the past, when he scrapped the Internet tax and the ban on Sunday shopping.

Magyar Hírlap’s Károly Bán asserts that over 266,000 signatures could not have been collected if the left-wing opposition parties had remained faithful to their commitment to the idea of the Budapest Olympics. In the Budapest municipal assembly all voted in favour of the Olympic bid, with the lone exception of the representative of the LMP. Bán also quotes an earlier statement by Szeged Mayor László Botka who is now the Socialist candidate for Prime Minister, that it was worthwhile “to struggle for the Olympic Games to be hosted by Hungary.” On the left, Bán concludes, short term political gains weigh more than a national cause.

Mandiner’s András Stumpf accuses both sides of chasing political gains rather than standing up for their opinions on the Olympics. Momentum, he explains doesn’t want the Olympics to be held in Hungary, but when its leaders heard that Budapest might withdraw its bid, they cautioned the governing forces against such “cowardice”, rather than declaring victory. In other words, they are waging a campaign against the government for their own sake as a new party, rather than against the Budapest Olympics. On the other hand, Stumpf continues, Fidesz is famous for being a great supporter of referenda. But when over 200 thousand citizens ask for one, then the governing party prepares to withdraw the Olympic bid rather than trying to save its Olympic idea. Political interests trump everything else, he concludes.

On Sztárklikk, a left-wing website, Zoltán Czeglédi argues that the left-wing parties have no reason to be jealous of Momentum. The job of the new movement which will shortly become a political party is to win over new constituencies. If the MSZP and the DK were able to recruit pensioners, the lower rural middle class, teachers or health care workers , then their electorate would increase threefold. That is precisely what they should be doing. Momentum on the other hand should mobilise urban, liberal minded and young voters. Those two constituencies do not compete with each other, Czeglédi explains.

On Kettős Mérce, András Jámbor, another prominent left wing pundit calls the success of the referendum initiative a victory for the opposition as a whole, including those who did not contribute to it. He says left-wing forces should draw strength from what he calls a factual defeat of Fidesz by a spontaneous initiative “from below”. This is the path, he believes, along which the incumbent ruling forces can be defeated. He invites the opposition forces to consider this feat as a first step and start working on the follow-up.

In his Magyar Nemzet column, Albert Gazda takes it for granted that the governing forces will withdraw the Olympic bid in order to prevent Momentum from pursuing its campaign any further. The new movement will therefore be forced to find new causes to fight for, which can also mobilise Hungarian citizens. He doesn’t know whether Momentum will be able to do so. At any rate, he considers the referendum initiative as a rehearsal, and he looks forward to seeing the main performance.

In Magyar Narancs, András Keszthelyi thinks that Momentum has better chances than previous spontaneous initiatives to develop into a sizeable political force. Mainly because its founders want to set up a political party rather than an NGO and behave like professional politicians have to. Their demeanour reminds him of Fidesz itself 27 years ago. They are also young and untainted by the tortuous struggles and mistakes of the past 27 years. Sooner or later, however, they will have to come up with a palpable political agenda and nobody knows at present how smart and convincing they will be in tackling the country’s problems.

On Paraméter, János Széky, who is a leading analyst at Élet és Irodalom, confesses to feeling elated at the news of what he calls a “tactical defeat” by Fidesz. His main point however is that Momentum has opened a breach in the wall of the political caste that has ruled Hungary for the past 25 years. Earlier, all parliamentary parties were fond of the idea of hosting the Olympic games in Budapest and were united in proclaiming that no new forces had any chance of penetrating the political space. He hopes that Momentum, when it transforms itself into a political party, will be successful and put an end to the exclusive rule of the current political caste.