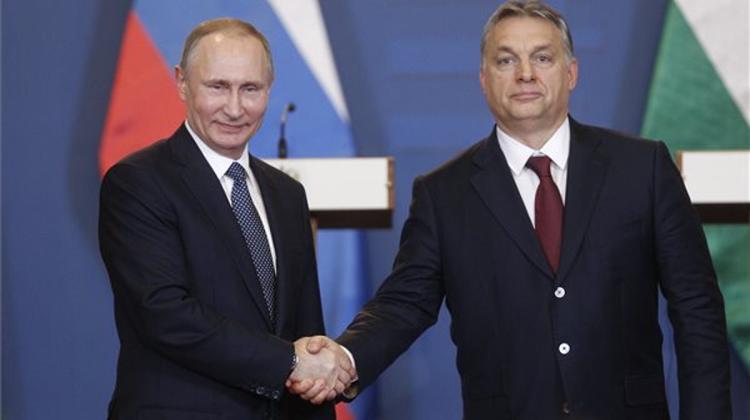 Hungary and Russia are being forced to work together in a “difficult international environment”, as anti-Russian policies have become popular in western Europe, Prime Minister Viktor Orbán said at a joint press conference with Russian President Vladimir Putin in Budapest on Thursday.

On the topic of European Union sanctions against Russia, Orbán said Hungary had suffered 6.5 billion dollars in losses because of the sanctions. Orbán said it was wrong to transfer conflicts that are non-economic in nature to the area of the economy, arguing that such problems cannot be resolved through economic means.

He said cooperation between Hungary and Russia was something to be “cherished”.

Orbán: water industry firms to get opportunities in Russia

Following Hungarian agricultural companies, water industry firms will also get opportunities to invest and develop in Russia insofar as they are competitive, Prime Minister Viktor Orbán said. Orbán said this represented a breakthrough in foreign trade.

“As a result of dedicated work in recent years, when risks were also taken, we have managed to rescue and protect Russian-Hungarian relations as much as possible and we have a good starting position so that when the world returns to the logic of cooperation, the Hungarian economy can start off from a good position in the Russian market,” he said.

The expansion of the Paks nuclear power station with two new blocks was high on the agenda of talks with Prime Minister Viktor Orban, Russian President Vladimir Putin said. Putin told a joint press conference after his talks with Orbán that economic cooperation was a priority issue and the construction of two new blocks in Paks was high on the agenda. The 12 billion euro investment project will create 10,000 new jobs, he added.

Hungary and Russia are due to begin talks on extending gas supply agreements between the two countries beyond 2021, Prime Minister Orbán said.. Regarding the upgrade of Hungary’s sole nuclear power plant in Paks, which is being financed by a loan from Russia, Orbán said most obstacles to the nuclear cooperation between the two countries have been cleared. He insisted that the bilateral agreements on the project were in line with European Union rules.

The EU will soon come to a decision on the single remaining open question, on state aid, in connection with the project, he said. Preparatory works on the upgrade are set to get under way later this year, with the actual implementation of the project scheduled to begin next year, the prime minister said. Putin underlined his country’s commitment to supplying gas to Hungary with “100 percent reliability”.

He said Moscow had not made it a political goal to stop transmissions of gas through Ukraine. If the route is reliable and it makes economic sense to use it, Russia will supply its gas via Ukraine, he said.

Hungary has the technical means to receive gas through the Nord Stream 2 pipeline via Austria or Slovakia, Putin noted.

Prime Minister Viktor Orbán said that he saw a chance for developing balanced and stable relations between the European Union and Russia, which, he said, was a precondition for peace in Europe. “It is in the air” that the world is undergoing a major transformation, Orbán told a press conference after talks with Russian President Vladimir Putin.

Orbán said a successful and stable Ukraine would be in Hungary’s interest, and the basis for this is peace.

Peace should develop in line with the Minsk agreement, which, he said, includes vitally important elements for ethnic Hungarians living in Ukraine.

“It is in our interests to cooperate,” Putin said. “We will find a way to implement gas supplies. I’d like to depoliticise issues that are purely economic.”

“I’d stress that we do not rule out any direction [of gas supplies],” he said, adding that even Bulgaria may come into play after having yielded to European Commission pressure.

“If it reconsiders its stance, then we could renegotiate the issue. But I’d like assurances that Russian companies are not going to make losses due to unconsidered decisions.” Putin emphasised the importance of dialogue, equally with Brussels and bilaterally.