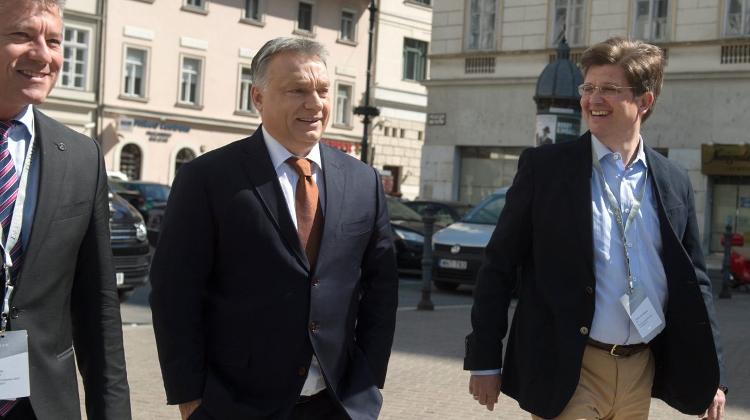 Prime Minister Viktor Orbán has said shaming Hungary was “foolish”, noting that the country currently has the highest or second highest growth rate in the European Union. Speaking at a general assembly meeting of Mercedes parent company Daimler in Budapest, Orbán said Hungary had the fastest-declining unemployment rate in the EU and that it complied with all European financial regulations.

The prime minister said the Mercedes plant in Kecskemét, in central Hungary, was a symbol of the trust the company has in Hungary. He noted that Mercedes employs over 3,000 people in Hungary, takes on “the lion’s share” of training engineers, supports dual vocational education and contributes to training workers.

Last year the company increased the share of its Hungarian suppliers to 30%, which meant orders from Mercedes to Hungarian companies reached 1 billion euros, Orbán said, adding that Mercedes was one of the reasons the Hungarian economy was on an upward trajectory.

Hungary’s economic growth rate of 4.1% in the first-quarter was as “not bad” compared with other EU member states, he said, adding, however, that he was not satisfied with the data, and Hungary would have to reach even higher growth levels.

Orbán said it was time to concede that Europe’s economy could not be strong without successful European national economies.

The 2008-2009 financial crisis was not about economic cycles but a structural crisis and a crisis of competitiveness, therefore the response should be given in the latter dimension, he said, arguing that two key components were needed to guarantee Europe’s competitiveness: a successful Germany and successful central Europe were already in place.

“A reformed France and an Italy with strong political leadership are still needed.” He said it would be important for Britain’s divorce talks with the EU to end in a “win-win situation”, adding, however, that the current state of negotiations pointed to “lose-lose”.

He called Hungary an “unwavering” member of the EU, adding that “its fate is connected” with the development of the bloc. He said now the EU’s competitiveness was under threat and the bloc was losing both economic and demographic weight. In order for Europe to regain its competitiveness, the bloc should allow member states to pursue their own economic policies within a jointly approved set of rules, Orbán said, adding that it would be wrong for member states to have to transfer more powers to Brussels.

Orbán said it was important to have a proper understanding of “the new industrial revolution”. He said Germany’s “Industrie 4.0” strategy would only be effective if it is coupled with low taxes and cheap energy. He argued that Europe should work closely together with regions capable of providing cheap sources of energy for the continent, rather than “cutting ourselves off” from these countries.

The prime minister underlined the importance of spending on innovation, arguing that this was an area in which Europe could enjoy a competitive advantage over the rest of the world. He also highlighted the importance of new forms of cooperation with developing countries such as China, India and Russia and Europe’s participation in the creation of new trade routes.

Orbán said member states’ tax systems should be tailored to the given country’s characteristics and should also take into consideration the local work culture and historical background. He said Hungary had made the right call when rejecting the “one size fits all” recommendations of the IMF, the European Central Bank and the European Commission, “otherwise we would have ended up like Greece”, which had followed their instructions.

Orbán said the primary reason why Hungary was an advantageous country to invest in was because of its political stability, arguing that it was now one of the EU’s most politically stable countries.

Hungary can guarantee a disciplined and rational fiscal policy, he said, noting that last year Hungary’s budget deficit had been 1.7% of GDP. He vowed that this year’s deficit would also be significantly below 3%.

Hungary could even register a budget surplus for the whole year, he said, but added that the government must support investments, encourage growth and manage the deficit all at the same time.