CEU Rector: Uni To Stay In Budapest For Next Academic Year 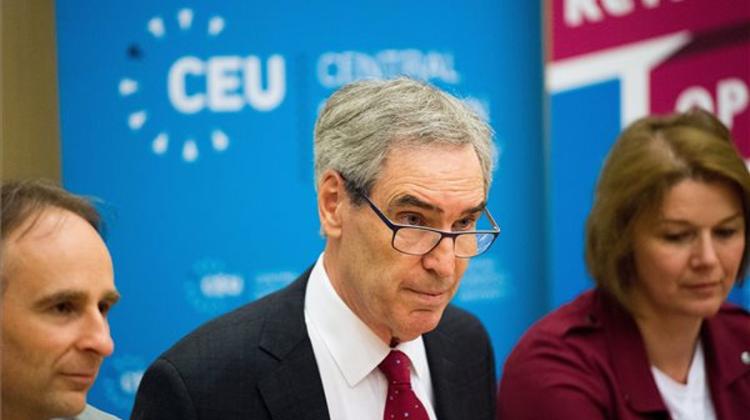 The Central European University will carry out all its activities in Budapest in the 2017-2018 academic year, the university’s president-rector said. Michael Ignatieff - pictured - told a press conference that the CEU welcomes the start of talks between Hungary’s government and New York State.

He added that prime ministerial commissioner Kristóf Altusz had reportedly contacted New York State officials over the phone last Friday. “We will not close. Budapest is our home,” Ignatieff said.

He expressed hope that a long-term agreement would be signed as soon as possible, enabling the CEU to stay in Budapest.

“The ball is in the government’s court,” he said, adding that the university was waiting for the government to begin “constructive talks” with New York.

Ignatieff also said the university had not experienced a drop in applications for the next academic year, adding, at the same time, that the university’s situation would have to be resolved quickly in order for student admissions to run smoothly.

Under the amended higher education act, the university would not be able to recruit students in its current form as it has in the past, he added.

Answering a journalist question, Ignatieff said that the university was now in a stronger position than it had been when parliament amended the higher education act early last month, which he attributed to the “resistance” he said the CEU had mounted against the legislation since then.

He said the CEU was not only fighting for its own freedom, but also for those of all universities in Hungary. He said it would be a mistake to think that by putting off talks or by further tightening education regulations the government could convince the CEU to leave Budapest.

Ignatieff announced that the university will organise an international conference on academic freedom on June 22. The main speaker at the event will be Nobel laureate author Mario Vargas Llosa.

Deputy rector in charge of Hungarian issues Zsolt Enyedi said the events of recent weeks had convinced them even more that they had responsibilities for Budapest and Hungary.

“We must stay as long as possible,” he said. Enyedi said the CEU had received “extraordinary” help from society, representatives of Hungarian and international higher education institutions and the Hungarian Academy of Sciences.

He said the university had asked the government to define the exact educational activities it is “supposed to be undertaking” in the state of New York under the amended higher education act, but had not been given a clear answer.