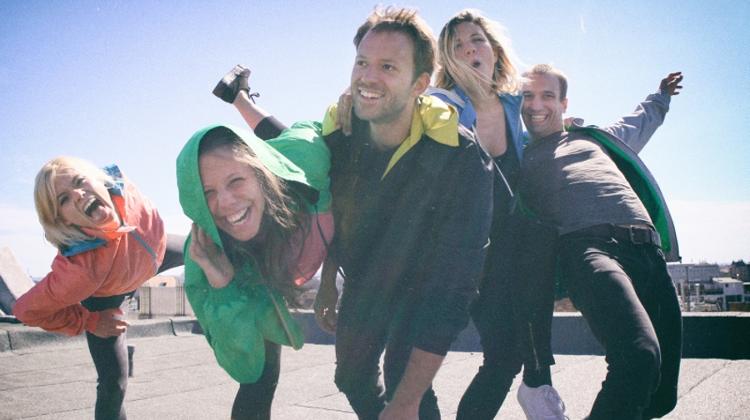 MA•ZE is the lovechild of dance artists Nagy Emese, Kristóf Várnagy and Jessica Simet. Former creatives of DART dance company, they decided to embark on this journey together in 2016 and share a mutual interest in creating quality work that resonates with and reaches a wide range of audience.

As an institution our intention with MA•ZE is to introduce the work of such creators, educators, thinkers that otherwise would be out of reach for most of the dance- audience and community. The goal is to create a platform where we can host workshops and/or smaller productions thus nurture and motivate the new generation of artists.

Kumzits
Virtuoso phisicality, extremely fast reaction time, clarity of form,passion to move, humanity characterize Guy Shomroni’s (IL) and Yaniv Avraham’s(IL) work. Leaving Batsheva after many years, they have set on a new journey together as creators and dancers. Since 2012, they have created in several countries in Europe and overseas, but the Hungarian audience will get to see their vivid aesthetics of dance and movement for the the very first time.

Guy SHOMRONI
Guy began dancing with the Batsheva Ensemble in 2001 and joined the Batsheva Dance Company in 2004, where he worked with choreographers such as Ohad Naharin, Sharon Eyal, and Yasmeen Godder. He also created ten original short pieces for Batsheva’s annual Dancers Create evening. In 2013 he served as Ohad Naharin’s assistant for the creation process of The Hole and in 2015 for the creation of Last Work.

Since leaving Batsheva in 2012, Guy and his long-time colleague Yaniv Avraham, also a former Batsheva dancer, have collaborated on two projects. In June 2014 they presented Kuntz, a duet danced by themselves, at the Zira Festival in Jerusalem. In November 2014 the pair premiered a work entitled Vellum, created for 8 dancers, in Moscow.

Yaniv AVRAHAM
Yaniv Avraham started dancing in Karmi Machol Karmiel, a folk dance academy and company, and he continued his training from 1999-2001 at the Mate Asher School of Performing Art (MASPA) alongside the Kibbutz Contemporary Dance Company on Kibbutz Ga’aton. In June 2001 he joined Batsheva Ensemble and in February 2003 was promoted to Batsheva Dance Company, where he danced until July 2010. While with Batsheva, Yaniv performed works by artistic director Ohad Naharin, house choreographer Sharon Eyal, and guest choreographer Mats Ek.

In recent years, he has performed in the works of fellow Batsheva alumni Noa Zuk and Gili Navot. As a dancer, he has received grants from the Israeli Ministry of Culture and Education, the Sharett Foundation, and the America-Israel Cultural Foundation. Yaniv choreographed several works for Batsheva Dancers Create from 2004-2010.

Since leaving the company, he has created new dances for MASPA and Florida University, and his solo Somersault (2013) was performed in several festivals at the Suzanne Dellal Centre in Tel Aviv, Dance Makers in Amsterdam, and MDF in Reggio Calabria (Italy). Yaniv has taught Gaga, Ohad Naharin’s movement language, to both dancers and non-dancers in Israel and internationally, and he has also taught Naharin’s repertory.

He has taught for dance companies including Batsheva, Carte Blanche, Les Grands Ballets Canadiens, and Cullberg Ballet and at dance departments at schools such as University of Florida, Jacksonville University, Tisch (NYU), and University of Southern Florida. He has led master classes and/or workshops in Australia, Singapore, Japan, Russia, Serbia, Germany, France, Spain, Italy, and the U.S. Alongside his ongoing choreographic work and teaching, Yaniv is currently the artistic director of MASPA.

DZSUMBUJ
Dzsumbuj is a collaborative live performance between the dancers of MA•ZE and musicians Vera Jonas and András Csizmás. The idea derived from Emese’s and Vera’s mutual interest in creating an energetic performance where their visions intertwine and have the opportunity to manifest themselves in an environment where anything can happen. There are no set boundaries and the nature of this creation can be viewed as a melting pot of the participants’ creative energies and ideas. Through venturing into the unknown we wish to invite our audience to merge with us into this interdisciplinary experiment and share a unique collective experience.

Nagy EMESE
Emese born in Hungary 1989, trained at the Hungarian Dance Academy. She participated in various dance companies around Budapest, such as Mu Terminal and Budapest Dance theatre and DART before co-creating MA•ZE. She is also a freelance dance artist and has worked with several choreographers creators such as Hiroaki Umeda, Guy Shomroni, Jack Gallagher, Krisztián Gergye, Ádám Fejes, János Feledi and János Mohácsi to name a few. If her schedule allows her, she travels to Israel to study Gaga from the Batsheva Dance Company Emese teaches improvisation and MA•ZE repertoire and also gives workshops for pros and non professionals as well in several schools and institutions (these include Hungarian Dance Academy, Movein Mission Studio, Workshop Foundations Budapest).

Simet JESSICA
Jessica began her studies in Stockholm after which she completed a post graduate course at the School of Dance and Fine Arts in Győr. She received a contract from Company Pál Frenák and spent two years as a full time company member. In the past 4 years she has been freelancing around Europe and has amongst others worked with Elio Gervasi, Roberto Zappala and Avatara Ayuso and has performed in the work of Guy Nader and Maria Campos. She is currently dancing with Eva Duda Dance Company and has been a co-founder of MA•ZE.

Várnagy KRISTÓF
Kristof studied classical ballet at the Hungarian Dance Academy for nine years. During this period he received both national and international awards and scholarships. Since his graduation he has performed in several genres ranging from contemporary dance through circus to classical ballet and have worked with numerous companies. Among others these included Compagnie Pal Frenak, Cirque du Soleil, Cullberg Ballet, Royal Swedish Ballet. He is currently a permanent teacher at the Budapest Contemporary Dance Academy and gives workshops at several schools and institutions these include Hungarian Dance Academy, Danscentrum Stockholm, Workshop Foundations Budapest. Kristóf has been a co-founder of MA•ZE.

Csizmás ANDRÁS
András is a musician as well as a composer. He completed his studies at the Ferenc Liszt Music Academy. He is the cofounder as well as a member of several music bands (Freakin’Disco, Morvai-Varga Quintet and Infinit). He also cooperates with various theaters and dance productions such as K2 or Tünet Együttes as well as the József Katona Theatre.

Jónás VERA
Vera completed her studies at the Ferenc Erkel Music Academy after which she continued at the London Centere of Contemporary Music. She is the founder of Jonás Vera Experiment and tours both nationally and internationally.