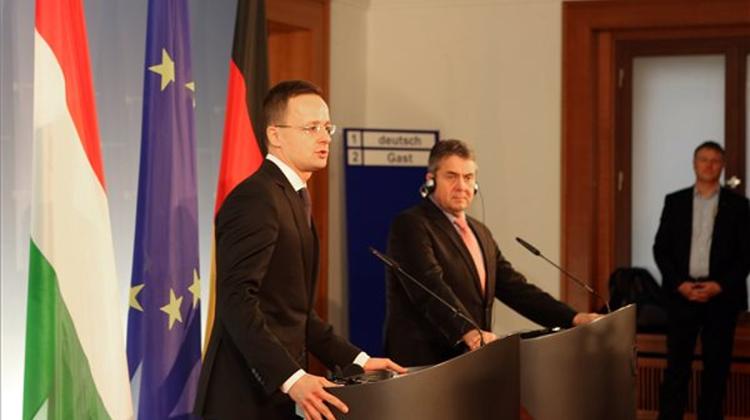 One of the key requirements for restoring Europe’s strength and competitiveness is economic cooperation between the Visegrad Group and Germany, Hungary’s foreign minister said in Berlin. “Europe’s economic axis has shifted towards central Europe,” Péter Szijjártó said ahead of talks with Sigmar Gabriel, his German counterpart.

This is further demonstrated by the fact that trade turnover between the V4 and Germany exceeds German-French trade turnover by 55% and is double the volume of trade between Germany and the UK, Szijjártó said. This is why German-central European cooperation will play a key role in restoring Europe’s economic competitiveness, he added.

On another subject, Szijjártó said European Union member states should pursue “civilised dialogue” instead of acting hypocritical when it comes to discussing the most serious challenges concerning the future of the bloc.

There are issues on which Hungary and Germany “don’t necessarily see eye to eye”, Szijjártó said, pointing out that migration was one such issue.

As regards migration, Hungary considers the protection of the EU’s external borders the top priority and it is committed to preserving the passport-free Schengen zone, Szijjártó said. Hungary is also ready to “engage in a civilised debate on any disagreements instead of stigmatising others and exercising hypocrisy,” he added.

Gabriel underlined the strength of Hungarian-German economic ties, and added that human and cultural relations between the two countries were also strong.

On the topic of disagreements on the future of Europe, the minister said they should be discussed in the spirit of solidarity and member states should avoid a rift between the eastern and western sides of the bloc.