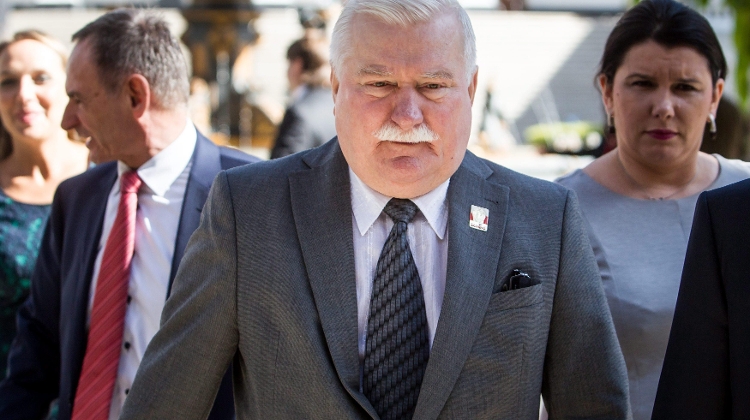 Famed Polish activist and Ex-President Lech Walesa once again harshly criticized Hungarian Prime Minister Viktor Orbán and his policies, calling him “demagogic” in an interview with Danish TV2. He also expressed his disappointment with current trends in Polish and Hungarian politics.

In connection with Orbán’s recent victory, Danish newspaper JydskeVestkysten quoted Walesa arguing that “old demons may resurrect” if we fail to build new institutions. The former Polish President also claimed that, as tensions increase in Hungary and Poland, disappointed people may take to the streets.

In general, without mentioning specifically Hungary, he said that opposing demagogic and antidemocratic tendencies can easily lead to street violence and bloodshed when people turn towards dictators and demagogues.

This is not the first time that the Nobel laureate ex-president has criticized Hungarian and Polish politics, and Orbán in particular: in December, in an interview with conservative weekly Heti Válasz, he accused Fidesz and the Polish PiS (Law and Justice) party of aiming to destroy the European Union, claiming that both are engaging in “populism and demagogy”.

Furthermore, he claimed that a responsible leader does not act like Orbán, adding that at the moment there is no cooperation, only individual actions in Hungarian politics.

While he reportedly respected and met Orbán on several occasions, and even campaigned for him in the 90s, the Hungarian PM’s shift towards demagogy deeply disappoints him.

Lech Walesa gained international recognition for his fight against communism and for democracy in the ’70s and ‘80s, and as a recognition of his efforts he won the Nobel Peace Prize in 1983. After five controversial years as the first democratically-elected President of Poland, the Solidarity leader was defeated by former Communist Aleksander Kwaśniewski.

Since then he has been involved, in various capacities, in Polish political life. However, he has never recovered the popularity he enjoyed as a leader of his country’s fight against Communism.

PiS has not taken Walesa’s criticism lying down, and the right-wing party has resurrected decades-old allegations that the anti-Communist activist had supposedly served as an informant for the Communist secret police under the code-name “Bolek.” Walesa, for his part, denies the allegations.

Gov’t Official: Hungary is hopeful that EC will end ‘political hunt’ of Poland

Speaking to Hungarian reporters by phone from Luxembourg after a meeting of EU affairs officials, the state secretary for EU affairs, Szabolcs Takács, said that the Hungarian government hopes that the European Union’s “political hunt” of Poland will soon come to an end and the European Commission will finally respect member states’ laws based on national traditions and sovereignty.

Takács claims that Poland “deserves respect”, arguing that despite the ongoing procedure against it, which he said “cannot be described as fair”, the Polish government was engaged in constructive talks with the EC.

Hungary disagrees with the procedure and does not support that the EC – instead of managing the issue as a bilateral one – “is conducting the procedure against the Polish government in broad public”, Takács said. The state secretary argued that the public procedure was increasing the political pressure on Poland.

He added, at the same time, that EC First Vice President Frans Timmermans’s recent move to start “meaningful” talks with Warsaw was constructive. Poland’s openness and willingness must be acknowledged, Takács said, arguing that Poland had amended its laws that had been considered the most problematic by the EC.

Orbán and his government views the ruling PiS (Law and Justice) party and the current Polish government as perhaps its most important ally in European politics.

The two administrations have more or less the same stance on a number of issues, while within the Visegrad 4 (a grouping which comprises the Czech Rep., Hungary, Poland and Slovakia) they are able to advocate on behalf of their interests within the EU more easily.

Hungary promised that it would veto any sanctions and procedures against Poland, such as the Article 7.1. procedure launched by the European Commission over the Polish government’s controversial judicial reforms, while Poland deployed border guards to help patrol Hungary’s southern border during the migration crisis.

Commenting on the EC’s measures, Orbán in an interview said that “if somebody attacks Poland, the whole of central Europe is under attack”.

Both Hungary’s Fidesz and Poland’s PiS have been criticized for what some commentators view as authoritarian, demagogic governing styles, and both have also been the subject of European and EU concern regarding the “deterioration” of the “rule of law” and of democratic institutions.

Besides political ties, the two governments are definitely aiming to streghten economic relations as well. The only point of potential conflict between the two might be the relation with Russia and Putin, who Orbán views as partner.

The Polish government, however, sees Russia with more than distrust, with some members of the PiS party suggesting that Putin and Russia might have been involved in the Smolensk plane disaster in which President Lech Kaczyński was killed along with other prominent leaders. Lech was the brother of the current leader of the ruling PiS party, Jarosław Kaczyński.