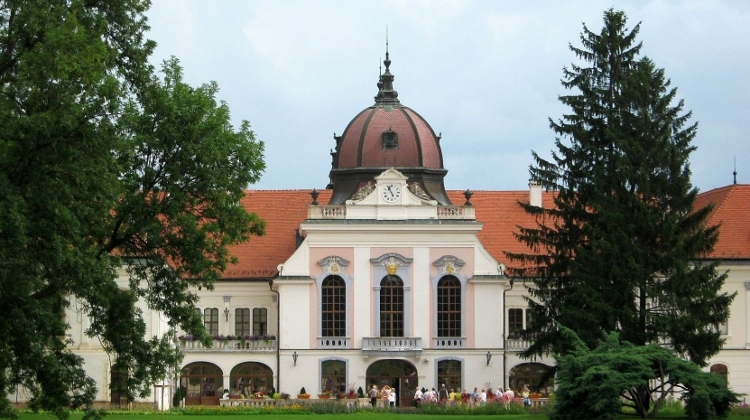 Count Antal Grassalkovich I (1694–1771), one of the most notable aristocrats of the 18th century, began construction of the largest Baroque palace in Hungary in around 1735.

The double U-shaped, 8-winged building was flanked by a church, orangery and bath house to the north, and stables and a riding hall to the south. The unique architecture of the Palace served as an exemplary model for other Hungarian palaces of the Baroque period.

The second golden age of the building began in 1867. Bought and reconstructed by the Hungarian state, the Palace was presented as a coronation gift to Emperor Francis Joseph I (1830–1916) and Queen Elizabeth (1837–1898) for use as a residence. The royal family would spend the spring and autumn hunting seasons here.

From 1920 onwards the Palace served as a summer retreat for Governor Miklós Horthy. This period ended with the outbreak of World War II. Although the building itself was left undamaged, most of the furnishings were carried away or destroyed by the German and Russian troops invading in 1944.

From 1945 onwards Soviet troops were stationed in the outbuildings, while the main building, classified as a historic monument, became a home for the elderly. These abuses led to a gradual decay of the Palace over the following decades.

Conservation work on the Palace, still in state ownership, began again in 1985. As a result of this, the first permanent exhibition was opened in 1996: the ceremonial hall and the royal suites. Several new halls have been added to the exhibition since then. Renovation of the Baroque Theatre was completed in 2003 and the Pavilion in 2004.

2010 saw the Gisela and Rudolph wings (named after the royal children) restored to their former splendour with EU support, a section of the Park was renovated and reconstruction of the riding hall and the Baroque stables was completed.

Historical traditions, a variety of cultural events and its wonderfully restored, uniquely impressive complex and surroundings make the Palace one of the most attractive and exciting buildings and institutions in Hungary.

Filling six galleries, this is an exhibition of the first century of the Palace and the first three generations of the Grassalkovich family, with insight into the Baroque church. The wall paintings dating from this period have been restored or reconstructed.

The village Calvinist church originally stood on the site of the palace church, but this was demolished on the orders of Antal Grassalkovich I as he planned to erect a richly decorated Catholic church adjoining the Palace.

The church was consecrated on 16 May 1749. Its patron is St John of Nepomuk as depicted in the high altar painting dating from the 18th century. The baldachin above the high altar rests on four black marble columns.

The triumphal arch is decorated with the Grassalkovich family coat of arms. A unique feature of the church is that it has two Rococo style pulpits. Above the entrance to the oratory there is a Venetian mosaic portrait of Antal Grassalkovich I.

The church has kept parish registers since 1769, and has functioned as an independent parish church since that time.

The second golden age of the building began in 1867. Bought and reconstructed by the Hungarian state, the palace was presented as a coronation gift to Emperor Francis Joseph I (1830–1916) and Queen Elizabeth (1837–1898) for use as a residence. The royal period is evoked in 14 galleries: the faithfully restored royal suites and the ceremonial hall.