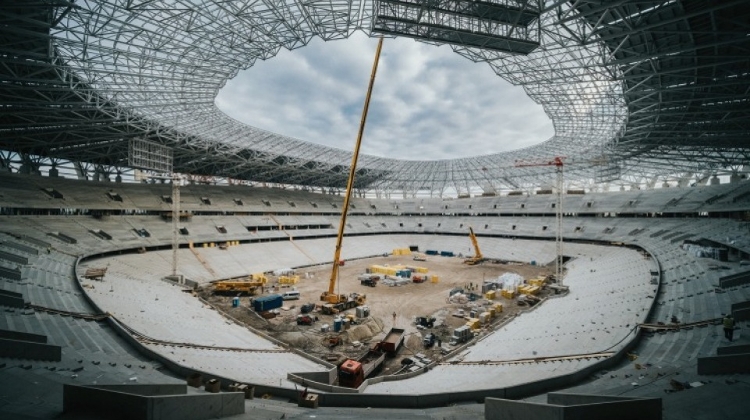 The Puskás Stadion will be the only completely new stadium among the 12 host venues for UEFA Euro 2020. Some 1,000 volunteers will work during the tournament in the Hungarian capital city, which is also playing host to the UEFA Women’s Champions League final in 2019.

Representatives of the Hungarian Football Federation leading the organisation of the two events informed the national sports media about tasks related to the upcoming large-scale events at a background discussion organised by the Hungarian Sports Journalists’ Association (MSÚSZ).

The purpose of the discussion was to get the representatives of the largest Hungarian media outlets acquainted as early as possible with important information about the co-hosted 2020 European Championship as well as about this year’s Women’s Champions League final.

Speaking at the discussion, UEFA Communications Director David Farrelly said that except for the one in Copenhagen, all host stadiums will have a capacity in excess of 50,000, meaning that UEFA are preparing to sell a record three million tickets for the tournament. This is substantially more than the amount sold for Euro 2016 in France when a then-record of 2.4 million were sold.

UEFA will be selling more than a quarter of a million tickets just for matches in Budapest, of which they would like to sell 70% to Hungarian fans. In relation to this, it is important to know that most of the tickets will be sold during the first phase of ticket sales in summer 2019. Those who wish to wait to see which teams qualify for the European Championship will most probably miss out.

UEFA has never organised such a large-scale tournament as Euro 2020. Until now the tournament has either been hosted by a single country, or (twice) joint-hosted by two countries, but for the 60th anniversary of the inaugural championship UEFA is bringing the event to all parts of the continent.

Up until now, only 15 countries have hosted the event, whilst 12 countries will co-host Euro 2020, seven of which – Hungary included – haven’t previously held the honour.

Farrelly emphasised that for smaller nations such as Hungary or his country Ireland, it is a wonderful opportunity to host European Championship matches for the first time, and aside from hosting the best teams on the continent, in the event of successfully qualifying for the tournament, will appear in front of a home crowd at Euro 2020.

Budapest is also playing host to the most important match in the calendar of the women’s game in 2019 when it hosts the UEFA Women’s Champions League final at the Groupama Aréna on 18 May, the encounter between the two best European women’s club sides on the continent being a fantastic opportunity for Hungary to develop and popularise the women’s game.

Similar to this season’s Women’s Champions League final, the organisers are counting on the help of volunteers for the four European Championship matches in Hungary. Some 1,000 volunteers will be selected from among applications by the Hungarian Football Federation.

The tournament provides a great opportunity for volunteers to actively participate at the European Championship, as they will be helping media staff and the work of the organisers, as well as ensuring that fans have an unforgettable experience at the stadium and the Fan Zone.

The Fan Zone will hopefully be full to capacity with football fans for every match held in Budapest, as will the Puskás Ferenc Stadion which is being built on schedule and due to be completed later this year, and will be the only brand-new stadium co-hosting the tournament.