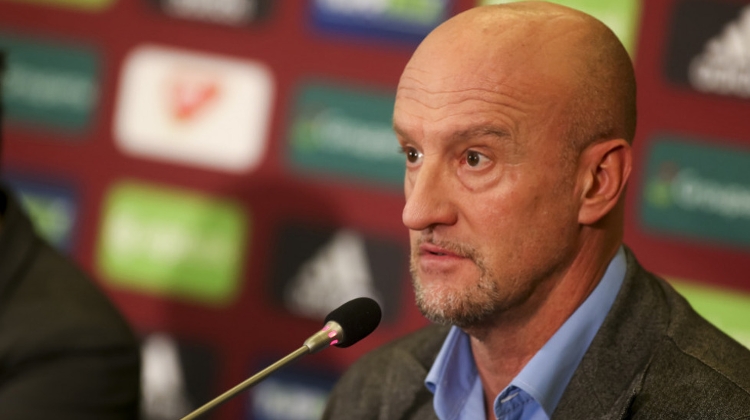 Marco Rossi has called up uncapped defender Zsolt Nagy for Hungary’s next two matches, while Dániel Gazdag and Máté Pátkai have regained their places after recent injuries.

Újpest FC are represented not only by Róbert Feczesin this time, but also by fellow forward Donát Zsótér in a squad which will prepare for the opening match of the Puskás Arena against Uruguay and the crucial UEFA 2020 European Championship qualifier away against Wales.

Hungary head coach Marco Rossi hasn’t had an easy task selecting his squad this time because influential players Ádám Nagy, Tamás Kádár and Willi Orban are not currently match fit, so contingencies have had to be made in case any of them fail fitness tests for the final Euro 2020 qualifier in Wales in just over two weeks’ time.

Goalscoring hero against Azerbaijan, left-back Mihály Korhut, is suspended for that match, as is László Kleinheisler.

However, Dániel Gazdag returns to the group after his appearance for Honvéd this weekend, during which he scored a contender for goal of the round in the OTP Bank Liga.

Máté Pátkai also returns, meaning two of the midfielders whom Rossi was shorn of during the last international period can now be counted upon again. In the forward line, experienced Hungarian international at youth level, Donát Zsótér, receives another chance to impress Rossi in training as the Újpest striker, also the scorer of an impressive goal in Hungary’s top tier this weekend just gone, seeks to make his debut for the full international side at the age of 23.

Several regular squad members are also missing due to injury this time, which is why potential debutants such as Zsolt Nagy have been included, the Puskás Akadémia defender having been watched by Rossi in October, at which point the Italian had said a call-up to the national squad could be possible.

"This time we've selected a few more players than we usually do," Marco Rossi told mlsz.hu. "One reason for this is that we have several players whose fitness for the matches is in doubt, while we can also only count on Korhut for the first game due to his one-match ban (in competitive fixtures).

In addition, we would like to see close-up those players who could be a serious option for us in the future. Zsolt Nagy is one such example. On the left side, we're going to be one player fewer due to Korhut's ban anyway and in this position, I envisage a quick, physically strong defender, which perfectly describes Zsolt. It is no accident that we've watched him for such a long time".

"We have two crucial matches ahead of us," Marco Rossi commented. "The first will be the opening match of the new national stadium, in which we will play against one of the best teams in the world.

The Uruguayan national team is made up of superstars who play for top clubs around Europe, so everyone will be watching us. It also means that it will be a huge opportunity for us to show to the world what we can do and perform the way we know we can.

The November schedule for our Euro 2020 qualifying group (all times are CET):