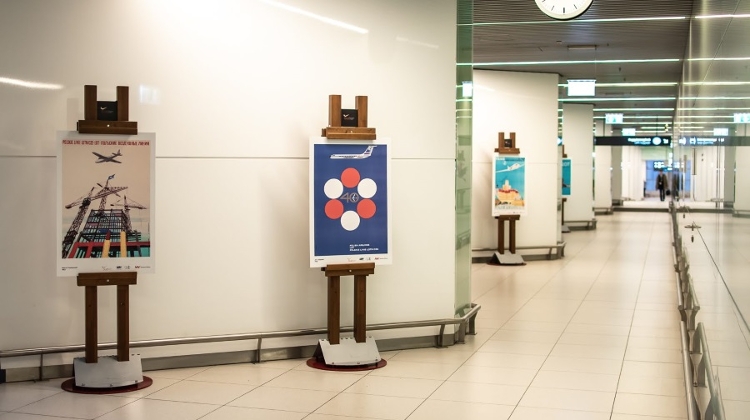 An extraordinary exhibition – unique in its kind – is opened in the Gallery of Budapest Airport in the corridor connecting terminal 2A and 2B at Ferenc Liszt International Airport where visitors can see various posters of LOT Polish Airlines celebrating its 90th year of operation this year.

The first item on display was printed in 1929, the year when the airline was founded.

90 years – on 22 poster. This is how LOT Polish Airlines is introducing itself to passengers in the BUD:gallery at Ferenc Liszt International Airport. Posters can also be found here from the period when LOT commenced operations between Warsaw and Budapest for the first time, in 1938.

Polish applied graphic design, especially poster art, was world famous for decades for a reason – and the Polish airline also had the opportunity to commission the best designers of the era.

The exhibition opened in Budapest offers a glimpse of not only the life of the airline, but also the 20th-centruy history of Poland from reconstruction after the war through the schematic world of the fifties to the 1970s and 1980s when LOT was operating long-haul flights from Warsaw again.

On the posters the viewer can see aircraft in use in different periods, including Fokker F.VII manufactured in Holland and used at the beginning of the 1930s, American Douglas DC-2, Iljusin Il-12 used in the 1950s, followed by the Tupoljev jets and Il-62s also capable of longhaul flights which flew from Warsaw to New York, Toronto, Bangkok, or Singapore.

“LOT Polish Airlines is flying between Warsaw and Budapest, and various cities in Poland, for as many as 81 years, and today we regard the Hungarian capital as a market of key importance,” underlined Elżbieta Borzon, Budapest station manager of LOT Polish Airlines.

She also pointed out that not only Warsaw and Krakow, but New York, Chicago, and London City airport are also among the destinations they offer from Budapest, and they are about to launch flights to Bucharest and Brussels as well.

He also pointed out that with this exhibition they would like to honor Polish poster art, and also to contribute to further development of the traditionally close Hungarian-Polish cultural relations.