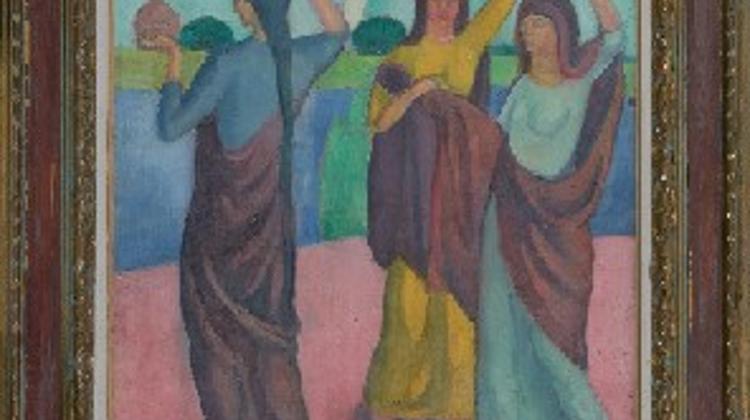 "The modern art collection of Elizabeth and Alexander Kasser (originally Kasza) and of the Kasser Art Foundation (established in 1969) may be of importance to Hungarian exhibition-goers for reasons beyond the fact that the collectors/founders were of Hungarian extraction.

The collection, which instead of adhering to big collectors' fads specifically reflects its creators' personal tastes and is often based on their friendships with artists, provides a highly inspiring, distinctive and convincing interpretation of modern art.

Paradise on Earth is humanity's eternal vision and dream of perfection, of nature, of harmony between people, of a golden age that never existed - one of the most inexhaustible subjects of art. Each of the 102 pieces selected from the collection is embedded in this vast thematic framework.

Alexander Kasser was born the eldest of six children in Budapest, Austria-Hungary. He first studied at the Sorbonne in Paris and earned his living playing soccer for the Socio Club of France, which was later to become famous. After taking a degree in chemical engineering at the University of Grenoble, he returned to Hungary and began to work in the paper industry. Through a series of patents and innovative personnel management, he quickly became one of the leading experts in the production of paper. Elizabeth Aranyi and Alexander Kasser met and got married in Budapest, and their children Michael and Mary were also born there.

In 1944, together with Professor Valdemar Langlet, Alexander Kasser organized and directed the Swedish Red Cross in Hungary, working to save hundreds of persecuted Jews and political targets. Elisabeth Kasser worked as an interpreter with Raoul Wallenberg. The Kassers supported Raoul Wallenberg significantly in fulfilling his mission to rescue thousands of people. In 1997, Alexander Kasser was awarded the title of "Righteous Among the Nations" and his name was added to those on the Wall of Honour at Yad Vashem for his humanitarian activities.

After the war, Alexander and Elizabeth Kasser left Hungary with their two children. They first went to Mexico, where Alexander Kasser soon held a professorship in Cellulose Chemistry at the National Polytechnic Institute of Mexico and later in the U.S., where he started a consulting company and thus his career in the paper industry resumed.

Both Elizabeth and Alexander Kasser had been lovers of music and the visual arts from an early age and had already started collecting art in Hungary. In the USA they were able to turn to this area again. In 1969, Elizabeth, Alex and their daughter Mary created the Kasser Art Foundation, dedicated to supporting art and music around the world. Alexander Kasser was an active member of the New York Academy of Sciences and the Grand Council of the Royal Academy of Dancing in London. Alexander Kasser died in Vienna in 1997 at the age of 88; Elisabeth Kasser died at the age of 82 years in 2002 in Washington, DC.

Their enthusiasm and love for the arts, as well as their awareness of the importance of supporting the arts and philanthropy, were handed down to their two children, Mary and Michael. Mary V. Mochary and I. Michael Kasser are both active art collectors. Their financial support made possible the construction of the "Elisabeth A. Kasser Wing" at the National Museum of Women in the Arts in Washington, DC, which opened in 1997, and the Alexander Kasser Theater at Montclair State University, Upper Montclair, New Jersey, which opened its doors to the audience in 2004."