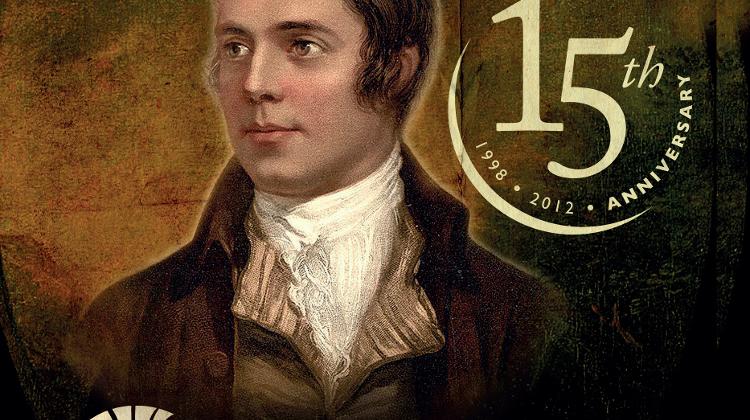 The name of the Robert Burns International Foundation Sponsor of the Year was revealed to a crowd of 75,000 on January 14, 2012, with Sir Alex Ferguson, manager of Manchester United Football Club, and the RBIF’s Honorary President, presenting the trophy to David Wood, commercial director of Tesco Global Áruházak Zrt.

Tesco Hungary is one of a handful of sponsors who have supported the charity fund raising Budapest Burns Supper since the very first Burns Overnight 15 years ago in 1998. The retailer, one of the largest employers in Hungary, is only the fifth recipient of the Puskás Ferenc – Sir Alex Ferguson Sponsor of the Year Trophy. According to tradition, Sir Alex presents the trophy to representatives of the award winner just before a home Premier League game. This year the match was against Bolton Wanderers, which given that there is only 30 km (20 miles) between the two stadia, almost makes it a derby game, and guarantees a sell-out crowd. The official attendance on the day was 75,444.

The Puskás Ferenc – Sir Alex Ferguson Sponsor of the Year Trophy goes to the company judged to have made the most significant contribution to the work of the Robert Burns International Foundation during the course of the previous year. In Tesco’s case, it has been a supporter of the Supper, and the children’s hospitals it supports, for 15 years. Tesco says the exact amount it has contributed remains confidential, but it certainly runs to several millions of forints.

“It is a core priority for Tesco to be a good neighbour and to act responsibly in the communities we serve. The cause supported by the Budapest Burns Supper has always been an important one for the local community, which is why Tesco – at that time a relatively new enterprise in the Hungarian market – decided to sponsor it,” David Wood said of why the supermarket chain had originally decided to support the Burns Supper.

“The need to support Children’s hospitals is an enduring one. Hence over the years we have strengthened our partnership with the Robert Burns International Foundation. We value the consistency of the Foundation’s leadership and the great effort the volunteers of the Foundation dedicate to helping people or institutions in difficult situations.”

Wood added that there were no plans for Tesco to reduce its support, despite the tough economic climate. “Such charity events not only raise funds for people or institutions in need but also highlight the areas where help is needed most. It is a way of setting an example of how individuals and companies can make a difference, and Tesco has been keen to do so. It is great that such an enduring legend as Sir Alex Ferguson continues to support the Foundation.”

The annual Budapest supper – based on the traditional celebration of Scotland’s national poet, Robert Burns – has raised and spent more than EUR 1 million since inception, both through direct cash donations and facilitation, all without overheads; management costs for the foundation are paid for directly by sponsors.

“Each year we try to increase the number and value of these projects and we wish to make 2012 a record year,” says Jock MacKenzie, chairman of the RBIF. “This year the Curatorium has approved five new appeals, in all about HUF 55 million, with different partners to include a British Embassy Paralympic Appeal, a reconstruction of surgical facilities at SOTE II with the Hungarian Business Leaders’ Forum, a joint appeal with the AmCham Foundation in Vas County, backing for the “Suits on Bikes” charity which continues to support the basic schooling of orphaned children in Transylvania, and a Foundation Cultural Appeal to create and erect a statue to the Hungarian-born St Margaret of Scotland,” the chairman explains.

Some tickets are still available for the 15th anniversary Budapest Burns Supper on January 28, 2012, to be held at the Corinthia Hotel Budapest. Businesses are encouraged to take a table, with the added incentive that all donations are corporation tax deductible. The RBIF is also eligible to receive the 1% of tax Hungarian tax payers are able to gift (at no cost to themselves) to a charity of their choice, and businesses are asked to encourage their staff to nominate the foundation

To book places, offer corporate sponsorship or to learn more about the foundation and its work, contact RBIF General Secretary Steve Jones by clicking here or via mobile: +36 70 941 1913.