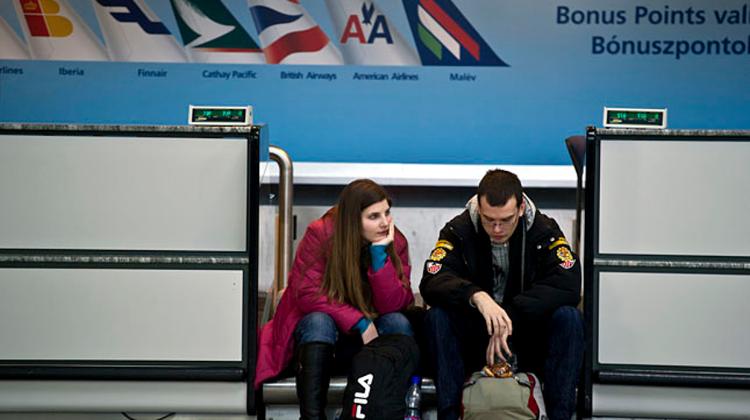 Malév stopped operations after 66 years of flying this morning at 6am CET, Friday 3 February. A company announcement explained the shutdown was due to the airline being unable to finance advance payments to its service partners who had “lost trust” in the Hungarian national carrier. XpatLoop.com was invited to a special event in Budapest today where <a href="http://www.xpatloop.com/news/ryanair_to_open_budapest_base_31_new_routes" target="blank"> a Ryanair 'rescue plan for Budapest and Hungarian tourism' </a>, was revealed to deal with the crisis resulting from the collapse of Malév - 31 new routes to and from Hungary have been announced with fares from EURO 9.99. Also today a bold statement was made about <a href="http://www.xpatloop.com/news/wizz_air_invests_huf_25_billion_in_its_budapest_operation" target="blank">WizzAir plans to invest USD 100 million into expanding its operations in Budapest</a>.

Malév stated today that the Hungarian government could not provide new cash for the national airline. The shutdown follows the European Commission order of last month for Malev to repay millions of state support. The airline has debts of approx. USD 270 million, and has not been able to find a new investor.

Yesterday it was still selling tickets, today Malév apologised to passenger online and issued hotline numbers for those affected: 06-40-21-21-21 from Hungary, and +36-802-11-11 from outside the country. The Malév website - now closed for bookings - informed ticket holders to call the hotline or email regarding alternate travel arrangements and compensation.

Budapest Airport release a statement saying it's operating despite the suspension of Malév's flights, and that they are working to ensure all passengers with Malév tickets arrive to their destination via re-booking on other airlines.

Budapest Airport spokesman Mihály Hardy said earlier this week, “It is a basic interest of the airport operator to have Malév or a different national airline operating from Budapest... as Malév contributes 36-40% of the revenues of Budapest Airport”.

A Ryanair Press Officer announced today, “We are flying to Budapest this morning to meet with Budapest Airport and the Hungarian Govt to finalize details of the largest ever investment in Hungarian aviation and tourism".

Jet2.com contacted XpatLoop.com this morning to remind expats they fly directly to Manchester, Edinburgh, and an upcoming new route from Budapest to Leeds Bradford, UK.  Jet2.com is a British airline based at Leeds Bradford Airport, it operates services from several UK bases to over 50 destinations.

For the direct flight today from Budapest to Manchester they have upgraded the size of the plane, and so increased capacity, with Jet.2.com tickets available from the airport and online. Nick Louden, Airports & Tourism Organisations Manager, European Sales & Marketing at Jet2.com, highlighted the advantages of this 'friendly low fares’ airline as, "Great flight times, 22kg bag allowance, allocated seats, and points for free flights".

Steve Heapy, Chief Commercial Officer of Jet2.com said: “Based on our experience of Budapest flights to Manchester and Edinburgh we anticipate that the new route to Leeds will also be popular." That now appears especially likely given the grounding of Malév.

easyJet are offering Malév passengers stranded at their destinations a special rescue fee of GBP 50 to return home, follow this link for related terms & conditions.

Wizzair, the 'low fare - low cost' airline which has its home in Hungary, is also offering special WizzAir tickets to Malév passengers who are now unable to reach their destinations.

In a radio interview today Prime Minister Viktor Orbán said two Malév flights are stranded aboard, in Tel-Aviv and Ireland. He emphasised that all other Malév planes are in Hungary. The airline says it aims to quickly return its airplanes to the leasing company.

PM Orbán is quoted as saying today that if there is an investor prepared to risk money to operate a national airline profitably, or at least not unprofitably, such an airline can be created. He continued to say there still could be another Hungarian national airline if skeletons in the cupboard are removed that were inherited from the past.

An official release states that according to the government regulation which entered into force on 31st January 2012, assistance can be provided to passengers who purchased valid tickets before Malév ceased, and whose travel dates are on the suspension day or on the following three calendar days.

In addition, passengers who already travelled to their destination before the suspension day and posses valid return tickets for Malév flights (on a date not later than 29th Februray 2012) are entitled to assistance from Malév by rerouting their tickets to other flights or other modes of transportation.

Conclusion On The Fly

The collapse of Malév, one of Europe’s oldest airlines, is bad news in the short term for 7,000+ stranded passengers, and Budapest Airport. However industry experience shows that the majority of the services handled by Malév will soon be taken over by existing airlines, along with new carriers ready to gamble on niche routes with established demand. The ultimate outcome may well be good for travellers as old monopolies are broken and prices are driven down by more competition.