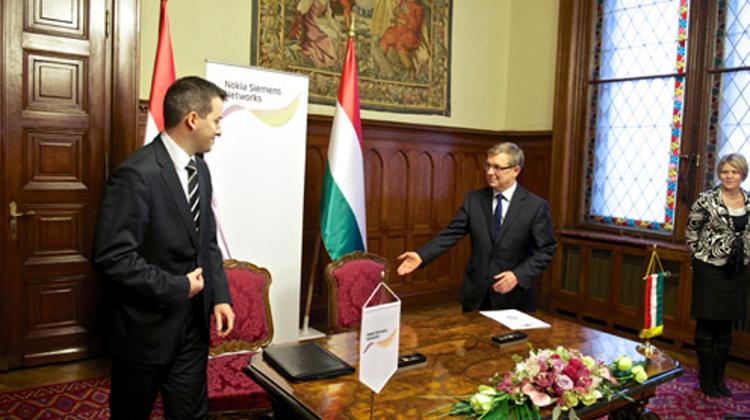 Doubling Hungary’s GDP by 2025 is an important national goal, Minister of National Economy György Matolcsy said on Monday at the signing of a Strategic Partnership Agreement with Róbert Ésik, Managing Director of Nokia Siemens Networks Ltd.

Minister Matolcsy said that to achieve this, the country has to triple its export output. The Government seeks to form partnerships with companies which can contribute to its efforts to boost employment and help Hungary become a regional centre of innovation, he said, adding that the Government relies on partner companies to participate in efforts to put the economy back on a growth path, and ensure that Hungarian products and services have high value-added.

"Nokia Siemens Networks is an innovative group, and will be a strategic partner helping to make Hungary a country of innovation, providing scope for renewal and creativity in the coming decades," the Minister said.

Managing Director Ésik said the agreement aimed at establishing a dialogue to support Nokia Siemens Networks' long-term presence in Hungary, provide assistance for the expansion of the company's activities in the country, and boosting the performance and competitiveness of the Hungarian economy.

He noted that Nokia Siemens Networks had opened a financial services centre in Budapest, handling accounting for its units in almost 50 countries and employing nearly 180 people, with the number of staff expected to rise further this year, he added. He also pointed out that there are certain technologies that the company only develops in Hungary. Nokia Siemens Networks employs almost 1000 people in Hungary, and established an R+D headquarters in the capital in 1998.