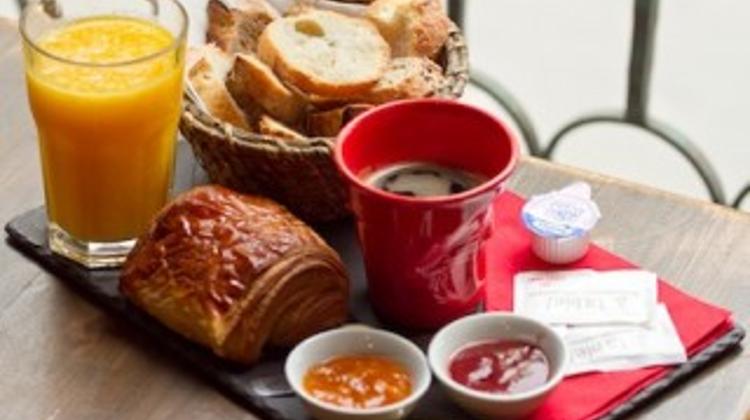 Our friends at WeLoveBudapest.com recently took an extended breakfast tour around Budapest - apparently lasting a couple of days - to taste some of the best places to have a delicious morning meal, at any time of day. They started their culinary expedition with the goals of finding 1) the very best cooked breakfast dishes, 2) truly well-baked pastries, and 3) authentic Hungarian and international specialties. Read on for a great selection of options, each with a photo to whet your appetite, and prices so you can make informed decisions about where to enjoy breakie in both Buda and of course Pest.

When you find somewhere pure Hungarian food, it is always a good sign, because it shows, that the local farmers are doing an excellent job, and the café's owners can offer high quality meals without purchasing foreign products. Still, only a few places can live up to this idea, one of them is called SzendZso. The place is located in Frankel Leó utca, you can order your breakfast all day long (until 8PM), and they certainly prove, that they do not need help from France, Britain or Italy for a tempting menu.

We had a Mediterranean omelette with mozzarella, pesto and parched tomato just to prove the fact that the pro-Hungarian opinion is not that strict as it sounds, and for dessert we ate a nuts croissant. People often start their day with a refreshing soup in SzendZso after a loud night in the ruin pubs, but the place has a daily offer as well. To have no doubt about SzendZso's tastes' will remind you of your grandma's food, we highly recommend the milk-loaf with ginger and orange, or the baguette with either buffalo salami or farmhouse ham.

Did you say that size matters? The answer is no, the Sarki Fűszeres will prove it to you, if we want to find the perfect choice for those who prefer a long sleep. This small place is located in the 13th district, but it's not just an average delicate shop, as the Baltazár Sandwich plate (1800 Ft) definitely made us to believe that. The fresh ham and cheese and the delicious bread with lemon jam, spicy butter and olive oil, the fried eggs and the vegetables made up another plate (1890 Ft), and this filling breakfast made us to forget the lunch and almost dinner at the same time.

For us Sarki Fűszeres is an extremely rich pantry, which automatically creates a temptation to rob this unlimited treasure room, and give the loot to our friends as presents.

The best thing about KINO is that the charm of the place is there in every single cappuccino, or cheesecake you take, we cannot share anything else with you. It doesn't matter at all if in the morning, or around midnight do we want to take an omelette, a toast or a salad with mozzarella, spinach and olive bread, because a friendly, relaxed atmosphere draws us to the place.

The French butter croissant (230 Ft), the KINO cafe latte with cinnamon and the sandwiches were our old friends before, so this time we picked the chicken toast with honey, mustard and a lot of vegetables. We had a hard time staying objective in these circumstances, but they did an amazing job with quality and tastes as well.

Even if you can't stand the fancy area, or the French cuisine, the Villa Bagatelle is worth visiting. Both the location and the interior shows that we will be welcomed with exclusive and classy food from a polite and upscale crew in a restaurant, which also has a bakery inside. We wanted to do this thing right, so we ordered a Champagne breakfast (3990 Ft), which had a brioche with smoked salmon, goat's cheese, raspberry and a glass of champagne (alright, we were weak, we chose coffee and orange juice instead of alcohol).

We felt like Catherine, Duchess of Cambridge were sitting next to us and we were also members of the royal family, but the Bagatelle breakfast (2290 Ft) got our jaws dropped as well.

On weekdays we can only order breakfast until noon, but on the weekend they serve it from 8AM until 4PM in Café Alibi. We tried Alibi breakfast, which had an omelette with vegetables, a croissant, a baguette, a cup of coffee and a glass of fresh orange juice (1790 Ft). The breakfast was filling and delicious at the same time, it was fresh, the spices were well-selected and the veggies made the whole meal perfect, what is more, they prepared it really quickly.

The hot apple pie was the ice on the cake, it had more apples, than sugar, which results maximum points for Café Alibi.

It's weekend, you had a well-deserved long sleep, your fridge is empty, but you want to kick-off the day right. You should start to think about Most!, which is also perfect for having lunch, or a coffee in the afternoon, or having a night out. Mostly foreign people ask for the brunch menu (1690 Ft), but we are almost sure, that soon the locals will follow their lead because of the legendary cheesecake, and the great time you can spend in the place.

Our plate was so full with the rolled chicken, we even had problems with using the cutlery right, but we made it work in the end. We can ask for orange juice, coffee, or even Bloody Mary, but the dessert is the reason, why we will definitely stay for much longer, than expected. But it is worth it because of the nice staff!

Despite the fact that it's a relatively small French bakery we're talking about, the Á Table could be the most romantic breakfast place in Budapest. The French cuisine, the kind aura of the bakery can make our morning brighter. Besides the delicious pastries (like quiche or brioche), the Á Table offers a morning menu from 7AM until 11AM. It offers poached eggs and other kind of options, like the petit déjeuner. This French breakfast contains orange juice, coffee, croissant, different kinds of bread, jam and delicious butter (990 Ft).

Even though the pastries are a bit expensive, we definitely recommend the Á Table, because at this place love definitely meets with quality.

Déryné is one of the few places in Budapest, where people actually go and have breakfast. Businessmen often have meetings here, and they usually ask for an Eggs Bennedict, while most of the customers just come in and have a coffee with a pastry (200-300 Ft). There is a secret basic breakfast, which is not mentioned on the menu, only the regular customers know about it. It gives them quite an advantage, it costs 990 Ft.

If you decide to visit Déryné's, you should definitely ask for the English breakfast, while the French version is worth a try as well, but it doesn't matter what do you choose, you get to taste the home-made bread with salt and butter. If you are in a hurry, and you would like to take away with you the special Hungarian cottage cheese pastry spiced up with some candied orange, or the bread, which smells, like it was fresh all day long, it would light up your morning as well with the place's early 20th century style.

Café Panini is a creative old school place, which does not really have any competitor in the area regarding breakfasts. So, how could an old school place be creative? Well, they offer French toast filled with ham and cheese, just like your grandma made it, but they give you vegetables, sour cream and dry tomato (990 Ft) with it as well. We took this one, but the regular customers just come in here in the afternoon, drink a coffee, fire up their laptops and ask for an omelette. We were brave enough to give a shot to the Capri coffee latte, which surprisingly came with an orange taste.

We are pretty sure, we'll return soon, because Panini has many unique offers to try, such as the cheesecake, the different kind of bagels, the Kaiser roll with tuna paste and the Panini with tuna cream and corn.

The Gerlóczy Kávéház has been a balanced spot on the breakfast market for some time now. Considering this, we were a bit surprised about the quality of the meat and the eggs in our breakfast, which was called Wealthy. Of course our critique mood rises a bit, when the prices are over 2000 Ft.

Despite the earlier experience, we were stunned by the delicious croissant, the fresh orange juice and the strawberry shake (decide, which you prefer: wealthy or fresh). It took a while to bake the croissant, but we didn't mind. Having the croissant with the melt cheese and the ham in a café, which reminds you of the late 19th century, was just a perfect start of the day.

At Briós, the chef comes out from the kitchen if you have a special order, and a playground welcomes the kids on the first floor. Here, the friendly atmosphere meets with the quality and quantity of the food. We ate a bagel with salmon and boiled egg and a mixed salad with tomato, rucola and natural olive oil on it (990 Ft). The brand new menu has some quite interesting offers, we tried a chocolate chip cookie latte, which was a great match with the diverse breakfast.

Briós definitely deserves an extra prize for being the most family-friendly breakfast spot thanks to the polite and kind staff.

There is a very long list about the reasons why do we love Fruccola. This time we focused on their brunch, which is only available on every Saturday from 9AM until 8PM. Our only problem was the bit chaotic service, but it automatically comes with Fruccola's immense popularity when we are talking about quality junk food. We can find healthy, fresh food for an average of 1000 Ft, but it is impossible to stop here.

Since we are here, why shouldn't we go further, since we're mixing breakfast with lunch? We asked for a French toast with spinach (1170 Ft), an English breakfast (990 Ft), a Mexican tortilla (820 Ft) and a gluten-free American pancake (1240 Ft). We were satisfied with the taste-healthiness ratio in the previous order, we had a very (a bit too much) filling experience, and the juice was just the icing on the cake.

Xpat Opinion: Where To Eat Breakfast In Budapest?