Sziget 2013 – The Island Of Freedom In Budapest 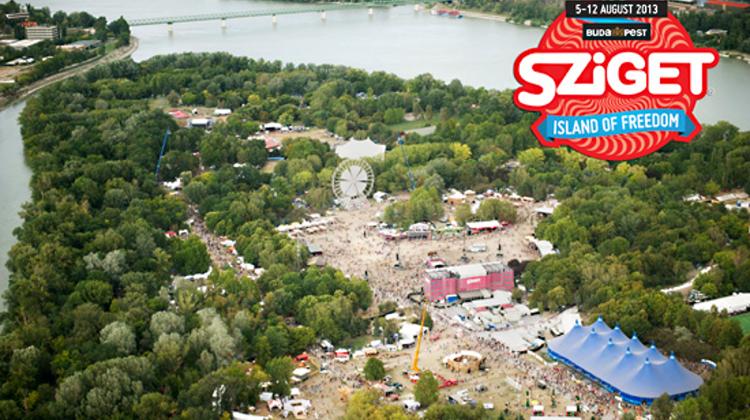 The Sziget press conference, held 27th March, has revealed many new information about the concept and programs of this year’s festival. Sziget, the Island of Freedom, was born, emphasizing the concept behind the 21 year old event. As an increasing focus of the organizers, the on-site visuals of the festival will have a greater role, therefore a huge End Show with David Guetta will crown the last evening of the non-stop week of fun. Some more venues and programs will enrich the festival as well.

While the event is known for its premium qualities, many of the services will be improved to make the festival holiday a more comfortable experience. Sziget takes place between 5-12 August in the heart of Budapest.

The Island of Freedom is born!

Almost the same day, twenty years ago, an enthusiastic group of youngsters have declared some slogans for an event that was about to happen. The following were born: “We need a non-stop week of fun together”,“ A meeting point for students of the universe-city” and “A place where anything is possible and nothing is compulsory”.

They summarized the event with these three sentences, the concepts that everyone of this friend circle was dreaming about. This is how Károly Gerendai, main organizer of Sziget Festival remembers these early days: “Freedom was always a key expression for us, and we might not even had a clue what a ‘real’ festival was all about, but we thought and felt that it could only be a place where people are without constraints and they can leave behind the problems of the weekdays to spend a week in happiness and peace”.

Basically the new concept of Sziget 2013 is a re-definition of the already existing one: this time the ‘Island of Freedom’ is officially born, that is a temporary republic for a week, with own rules, own money, a physically separated location of an island, in the heart of a metropolis, with an own hatchment and flag.

The Island of Freedom is a democratic republic without a leader, where every member of the society, either aboriginal or immigrant, has the same rights and commitments.

Country Facts
Location: Sziget, the Island of Freedom is a republic located on an island on the River Danube in the Northern part of Budapest. It is surrounded by the parent-branch of the River Danube from the Eastern side and by the side-branch on the Western side. The territory is 76 hectares.

Geography:
Relief: Plain terrain surrounded by forest
Hydrogeology: The Danube is the main river with an excellent runoff
Climate: Continental climate, average temperature between 25-30 °C
Flora & Fauna: The Island of Freedom has a diverse flora & fauna. The Szitizens devote special attention to preserve the original habitat

History: The first festival-settlers (a.k.a. Szitizens) have arrived in 1993 to the island. The development is constant ever since. Year by year there are more locations and the infrastructure has been developed constantly. Today it is one of the main and most exciting tourist destinations of the youth of the world. It has been chosen the best of its category in Europe in 2011.

Population: According to the latest census: 381.000 Szitizens. With this number it is ranked the 177th in the world.
Ethnic groups and official language: Most of the Szitizens are Hungarians, but the population is very diverse, almost all nations are represented. Spoken languages are: Hungarian, English, French, German, Italian, Dutch and many other languages from all over the world, although the common language used is music. Any language difficulties are handled with ancient rituals as pálinka consumption, dancing, etc.

Currency: cashless, only cards and some other approved electronic payment devices are accepted

Transportation: Sziget, the Island of Freedom has a developed transportation. Almost all transportation means – water and land – are available, with which you can reach the island. On the land of the Republic – not only for environmental concerns – only the pedestrian transport is allowed. The Szitizens can use the public transportation of the near metropolis with their Citypass document.

Culture: The Island of Freedom has earned rightly the „most colorful” term, as almost all cultural genres are representing themselves on the 60 different program spots.

The Visuals – End Show with David Guetta and more

While Sziget is working on being diverse and exciting music-wise, and absolutely unique when it comes to non-musical cultural programs, there has always been a tendency to create a special atmosphere, experimenting with lights and installations. For instance the Luminarium, the Tarot Labyrinth and the Cökxpon locations or the mood lightning of the lampions or the amazing street theatres are such important elements of the Sziget atmosphere.

In the previous years the international trend has shown that there is a greater emphasis on the visuals of the festivals. In line with this trend, Sziget has always focused on improving the spectacle and a lot of energy and resources have been allocated for this cause. There have been many successful projects as the Colosseum, the Hungaricum Village, the Luminarium, the Eastern-European Funfair, but there was room for the installations of the Hello Wood and Medence groups as well. Year by year the number of these activities have increased, especially since last year with the Sziget Eye.

Károly Gerendai said the following of today’s festival scene:”Today not only Europe or the world, but also Hungary is full of greater and greater festivals. Many of them offer similar musical programs”. He also added that only those can survive on this market, who can show a unique atmosphere and break out from the ‘uniformity’.

Sziget has early noticed with its relatively low ticket prices that it will not be able to compete with similar international events, as it cannot be competitive in an environment where others spend their budget on mega stars. Instead Sziget has a focus on cultural diversity, quality of services, atmosphere and a good price-value ratio. Gerendai also added:”These efforts were valued in 2011 when Sziget was awarded the best festival in Europe.”

This year the organizers have decided to dream even bigger and to develop Sziget to be an artistic product. That’s why the visuals became so important now. Gerendai also mentioned:”Among international festivals, especially the electronic music festivals, investments focused on gigantic stage visuals and special effects mainly to create a kind of festival-Disneyland”.

Sziget does not necessarily want to follow this path, but head towards having more installations, sculptures, lightning that could be interpreted in a cultural sense as well. It could be said that Sziget invests more then ever this year to create an “experience-festival” atmosphere.

One of the most important parts of this concept will be the End Show, for the first time. As its name states it will be the final act of the one week of fun. So on Sunday, on the Main Stage, Sziget will end with a very exciting show full of fireworks, pyrotechnic and other special effects and laser show. The music during the show will be played on stage by the best-known DJ-producer nowadays, David Guetta.

The atmosphere for this ‘experience-festival’ will be supported by the lights during the nights as well. Trees will dress up in X-mas lightning and the number of lampions will increase. There will be a so called Disco Park, in the forest near the Main Stage, where „disco lights”, light bulbs and stroboscopes will lighten up the nature to create a great party feeling. A new location this year will be the Freak Park, close to the entrance at the K-bridge. This part will be specially lighted and will be gloomed with the help of mist machines.

New programs & venues – From Sziget Beach to the Color Party

Sziget, the Island of Freedom is proud to present its new venue, the Sziget Beach. In the previous years it was strictly forbidden to swim in the Danube due to safety reasons, however this year - thanks to new developments - it will be allowed to refresh at the beach. The Sziget Beach will await the Szitizens with infrastructure and bars, even at nights in the theme of the Full Moon Parties of the Far-East.

Sziget Eye, the ferris wheel of the festival, will be twenty meters bigger, than last year, thus the event will have one of the biggest traveling ferris wheels of the world. A 60-meter gigantic wheel will take the guests up high, while at night it will be dressed up in colors and projections, in this way becoming one of the biggest attractions of the festival.
Reminding us of a travelling circus from the 1890s, both in terms of visuals and program, Cirque du Sziget, a brand new venue, will host circus shows. This will be the home for the exclusive show of Recirquel and many other amazing and cannot-miss productions.

Sziget is not only a music festival, but a huge artistic gathering as well. The Giant Street Theatre will arrive this year from one of the most far away continents, where people live together with kangaroos and koalas. We cannot tell their name yet, but we can state that they are world-famous and their monumental and breath-taking production could be seen not once, but three times a day.

During our walks at Sziget we could meet people in weird dresses, characters from tales and creatures popping out from our fantasy world. This year Sziget will host very colorful street theatre productions from all over the world: from the land of Maoris, through New Zealand to Australia, from India to the Great Wall of China and from many European countries.
The Eastern-European Funfair will await those who are willing to emigrate with the already known playful methods.

The theme this year is the hippie world of the 60s and 70s. The freedom and peace movements will be linked together with the philosophy of the ‘Island of Freedom’. Long hair, skinny jeans, peace & love! In the clothes factory of the Eastern-European Funfair we will be able to make our own festival outfit expressing our freedom.

The new Ruin Pubs Quarter will not only strengthen the event with a unique choice for catering, but it will be worth seeing as it will create a special and exclusive atmosphere. The most exciting bars will settle down on Sziget to make it a more vibrant place for a week.

Two former venues will have a comeback this year. Playing alive Irish music, the Irish Pub Stage and recalling the best songs of music idols, the Tribute Stage are going to be the new hot spots of Sziget.

Services – a premium festival, supplying the best of everything

Comparing the festival services in the international festival scene, Sziget is highly outstanding, according to the feedback of international guests. However there is always room to improve, so the festival organizers constantly focus on strengthening this segment as well. There will be a spectacular development of the hygienic services. Most of the new bio toilets will await the Szitizens.

They will be found grouped together, with lighting and constant cleaning services. There will be more and significantly comfortable showering possibilities, together with dressing rooms equipped with lockers, a comfy waiting room and make-up room as well. The catering services will also improve, as the organizers will make sure that the food stalls are the best in quality and looks with the well-known diversity of cuisine.

Next to the playground of Sziget, one will find the “Family Camping”, where the families with children can find services suitable for them, with play place for kids and programs for the smallest Szitizens.

Last but not least: Citypass has been a popular service of the festival for two years now and it’s back. With the pass the guests can use public transportation for free and can use Budapest-related services for discounted prices or free of charge. More information on Citypass coming soon.