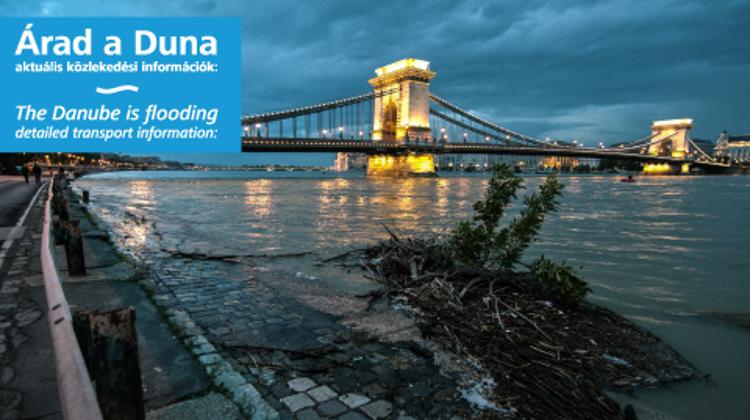 On 11 June 2013, Budapest Mayor István Tarlós ordered BKK, Municipal Disaster Management, Budapest Sewage Works, Budapest Transport Company BKV and the Budapest Police to jointly assess the situation at Batthyány tér and decide on how to alleviate the traffic restrictions affecting Budapest residents in line with the receding water levels of the Danube.

Accordingly, the Batthyány tér station of metro line M2 will be reopened on Wednesday morning, 12 June 2013, with all bus lines of the area resuming their services. Road closures will mosly remain in force therefore motorists are asked to still leave their cars behind and use public transport as well as bikes in the city centre.

Higher service frequencies are provided on BKK’s main fixed-rail transport lines and MÁV-Start commuter train lines. Bem rakpart, the Batthyány tér area and the lower embankments remain closed. Due to the closures special traffic measures will be introduced to prioritise public transport and to prevent congestion in the centre of Buda by diverting incoming road traffic.

Battyányi tér and its vinicity

Due to the flood control activities, compared to the original capacity there will be much less room available for passengers in the Batthyány tér underpass, thus everybody is kindly asked not to stop and keep looking around on the premises of the station! The ticket office located at the metro station is still closed.

Tickets, travelcards and passes are on sale at the ticket booth above the ground. Also the shops located in the underpass will remain closed.

Simultaneously with the re-opening of Batthyány tér metro station, from the early morning of 12 June 2013 (Wednesday) buses 11, 111, 39, 160 and 260 will depart from their original terminus, Batthyány tér M+H. These buses will run on their original route again in full length.

The pre-flood traffic order is reinstated in Török utca and Üstökös utca, also Árpád fejedelem útja going south will be reopened to road traffic on 12 June 2013. Driving is possible from the direction of Óbuda, coming from Árpád fejedelem útja to Széll Kálmán tér (via Üstökös utca – Török utca) and onto Margit híd to Pest , but due south on Bem rakpar towards Batthyány tér is still not possible. To avoid congestion towards Pest Árpád híd is still recommended to motorists.

Both Királyok útja and Nánási út are closed. Buses 34 and 934 still run on diverted routes. Due to the closure of Pók utca, Bus 106 runs on a diverted route on Szentendrei út. The following stops are not be served: Aquincum H, Pók utca, Silvanus sétány, Nánási út stops and the terminus at Római úti lakótelep. After the Kadosa út stop, buses use the Aquincum H stop of bus 34.

Margaret Island Hotels In Budapest To Be Evacuated