"Leonardo, The Renaissance Genius"– The Exhibition Of The Year Has Opened In Hungary 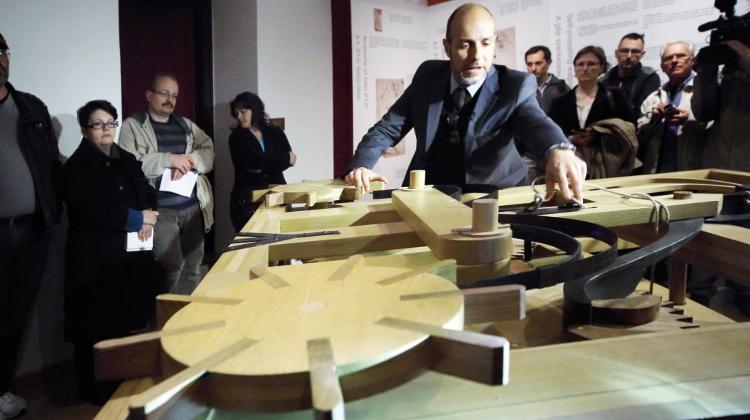 On the birthday of Leonardo da Vinci, the all times’ greatest Leonardo-exhibition has opened its doors in the Janus Pannonius Museum of Pécs in Hungary. The exhibition, showcasing the scientific and engineering works of the genius brain, awaits visitors at two venues, on almost 1500 square meters, until 30th September 2014.

In Pécs, the first time in Europe after more than five hundred years of the birth of Leonardo de Vinci, an exhibition presents the only overarching compilation of the engineering works of the polymath. Visitors may marvel at Leonardo’s sensational automobile, the remake of the Sforza horse, the flying man and the Vitruvius-study that presents perfectly the proportions of the human figure at two venues of the Janus Pannonius Museum, celebrating its 110th anniversary: in the Modern Hungarian Gallery and the Martyn Museum.

The exhibition showcases nearly 60 inventions by true make and measure, allows glancing at Leonardo’s drawings and writings, and introduces other engineering works of Leonardo’s time. The exhibition is enriched by thematic films and 21st century multimedia equipment.

“It is not unintentional that this unique exhibition is opened today. In 1452 Leonardo da Vinci was born on this day. The renaissance genius has tried to deeply look into all areas of life. This special collection exhibits his well-known and less-known researches. The city of Pécs with the Leonardo-exhibition may be placed in the centre of attention. We hope that visitors – who are Hungarians and foreigners, as well – may return to their home full with good experiences and they take our honour abroad!” – said Zsolt Páva, mayor of the City of Pécs.

The opening had been preceded by a nearly one month long preparation, including readying of the halls, the construction of the exhibition and the building of the Sforza-horse on the Széchenyi square. The 8.5 meters, 13 tons exact-scale horse-sculpture made of artificial rosin is also an important piece of Leonardo’s oeuvre, thus an integral part of the exhibition. Two lorries carried the horse, a further four lorries, 24 tons each, brought the rest of the exhibition pieces to the capital of Baranya county.

“The construction of the models true to the era and the exact in measure had been preceded by careful scientific research; this is how Leonardo’s dream, these masterworks of engineering could be realized, showing trustworthily the decade when science was born.

The exhibition through Leonardo’s eye shows the full spectrum of the renaissance genius’s work” – said Giovanni Di Pasquale, responsible for international research and coordination at the Galileo Institute and Museum of the History and Science, Florence. The owner and intellectual creator of the scientific materials is Paolo Galluzzi, director of the Galileo Institute. The exhibition was constructed by the Opera Laboratori Fiorentini Co., contracted by the Janus Pannonius Museum.

According to the agreement with MÁV-START Ltd., those who travel to the exhibition by train in Hungary may purchase fifty percent reduced fares.

More information on the exhibition: www.leonardopecs.hu

News and updates may be found on the Facebook-site of the event: facebook.com/leonardopecs