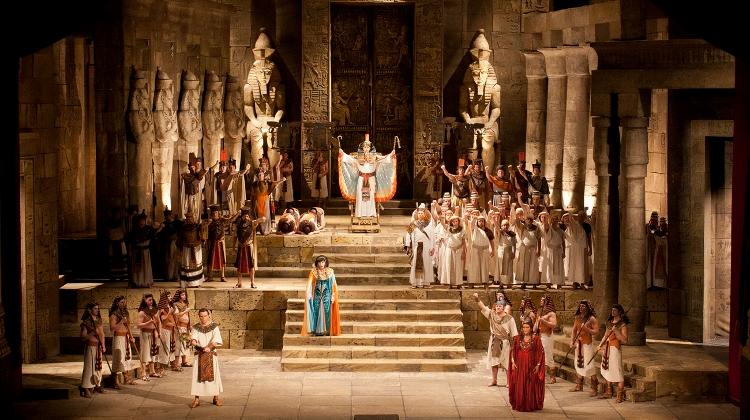 The story of a secret love, an outdoor opera premiere on 1 and 3 August (Friday, Sunday) 2014 8pm on Margaret Island Open-air Stage, a performance of the Hungarian State Opera.

One of the most famous Verdi operas imbued with passion is the love story of the Ethiopian princess cast into slavery and the forthcoming wedding of the Egyptian general.

In the heartbreaking story, Aida and Radames, floundering between a love triangle and a power play, the lovers seemingly renounce their freedom and choose death in exchange for their true feelings.

Set in an exotic location, Verdi's monumentally powerful musical drama, which he wrote for the opening of the Cairo Opera house, also calls attention to the reconciliation of the people.

On Margaret Island, the production by the artists of the Hungarian State Opera is staged to highlight the outdoor venue’s unique sound and visual capabilities with international stars in the leading roles.

At the invitation of the festival, Brazilian-Italian star tenor Thiago Arancam, will play the Egyptian general and will perform for the first time in Hungary.

The young singer, whose voice has been compared to Jose Curá, has received multiple awards at song festivals and became a member and soloist of the Accademia Teatro alla Scala in Milan. In 2007, he made his debut in Puccini's Le Villi; his international career followed the Operalia competition in 2008, where he won three awards, including the people’s choice award.

The outdoor premiere realized by the cooperation of The Hungarian State Opera and the Open-air Theatre.

Radames, the King’s favorite general is told by high priest Ramfis about the Ethiopian enemy raids. Only one desire fills his soul that the great gods appoint him to lead against the invading attacks by Egyptian forces. His life goal: to fight and triumph for Aida, the Ethiopian slave girl whom he adores, and who returns his love. Returning as a victorious hero, surrounded by glory, the King couldn’t possibly refuse his request, and would certainly bless his marriage with Aida. The young general is also the hero of Amneris’s dreams. However, the proud princess is suspicious and thinks that Aida is her competitor.

The King solemnly proclaims that on Isis command, Radames will head the invincible Egyptian forces to liberate his homeland from the enemy. Aida's soul is tormented by a painful struggle; the reason her father raised arms was to free her from slavery. If he wins, Radames must perish, but if she prays for her lover’s victory, she sins against her own father.
At the temple of Phtá, Ramfis extends the sacred sword to Radames.

Amneris wants proof and therefore sets a trap to snare Aida: first she talks about Radames’ death then, seeing Aida’s despair, triumphantly yells: Radames lives. The slave girl’s delight reveals her heart’s secret. Outside the trumpets blare victoriously, and Amneris sets off, as the daughter of the Pharaoh she extends the symbol of victory to the hero general.
With their pharaoh in the lead, the cheering crowd welcomes their liberator. Among Radames’ captives they also bring Aida’s father.

The Ethiopian king has successfully concealed his identity and he signals his daughter not to reveal herself either. The Pharaoh took an oath to fulfill the victorious hero’s wishes and Radames generously asks for the release of the Ethiopian prisoners of war. Despite Ramfis’ intervention, Aida and her father remain hostages in Egyptian bondage. The King, in gratitude for its hard fought victory, gives his daughter Amneris’ hand in marriage to the winning general, and the two shall inherit Egypt's throne.

Aida waits for Radames. She doesn’t yet know what the general plans to tell her. However, her father surprises her there instead. Amonasro, discovering Aida's secret, threatens his daughter with a terrible curse if she doesn’t stand up for her crushed people. The newest Ethiopian troops are ready to raid Egypt once again. Aida must find out from Radames which roads the Egyptian armies haven’t yet occupied. At first Aida desperately protests but then she finally gives in and promises obedience.

Radames, caught between loyalty for his country and love, eventually topples. In possession of the secret, Amonasro triumphantly comes out of his hiding place to prevent his daughter from escaping with Radames. However, Amneris and the high priest call the guards who chase after the runaways. While the Ethiopian King flees with his daughter, Radames voluntarily passes his sword to Ramfis.

His pursuers killed Amonasro, Aida has disappeared and death awaits the treacherous Radames. Amneris still loves the former general and summons him. Her only condition; if he forsakes Aida then she will beseech her father to pardon him. However, in Radames’ eyes, there is no longer any value in life on earth. He doesn’t say a single word in his defense, his only desire: the grave. The clerical judges sentence the traitor to death: he will be buried alive in the walls of the rock tomb beneath the altar of Isis.

The vaults of the tomb close above Radames. Aida, who guessed what fate awaited her love, has already hidden in the depths of the crypt. She waited for him there so that their souls could rise together to their eternal home.