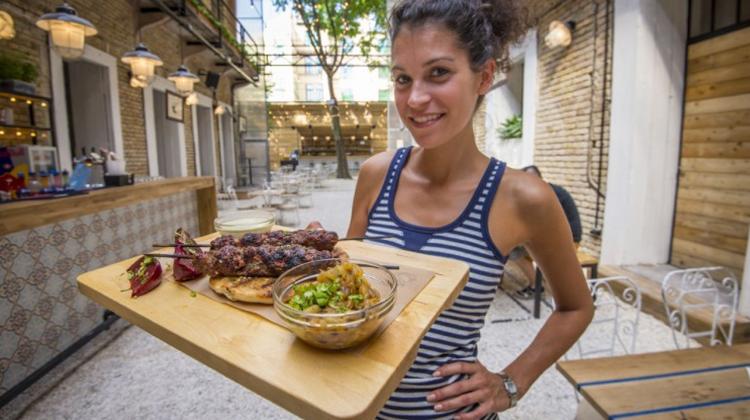 “Because we pay attention to each other here, because the Gypsy musician plays to the Jewish dancer, the Israeli chef composes the dish to the pictures of an Arab painter and the Japanese tourist puts the camera down for the sake of a shot of good kosher plum brandy. Here, culture and tolerance meet and become one within yourself, myself, ourselves…”

It’s been just over a year since the country’s first Israeli-style “ruin restaurant” has opened in the very middle of Akácfa utca in Budapest’s party quarter.

Architects Péter Szendrő and Ádám Bajor of terv81, together with Viktor Csap of Studio Arkitekter, the architectural firm known for its clear-cut designs, gave a thorough makeover to the trash-ruin style of Sufni, the ruin pub that previously occupied its premises – it comes without saying that Middle Eastern and Israeli tastes dominates the kitchen and coriander keeps crawling out from the vegetable garden, any practically everywhere else.

The menu was compiled with help from Hummus Bar’s chefs to make everythign work, which is another bonus in favour of the place, as is the imagery and the hype with which the venue entered the public conscience even before its opening. But let’s eat!

Kebab. What can you expect from it? Beef kebab flavoured with coriander and mint in a za’atar pita, to be more exact. You’re asking what za’atar is? A Middle Eastern mixture of spices which includes the za’atar spice itself – more familiar as hyssop -, pistachio and roasted sesame seeds.

This is what the pita gets; as for us, we get a wholly new set of flavours. Combined with mint, beef tears all monotonous thoughts out of our heads and makes us become the happy consumers of fresh and vibrant bites, and frying on lamb’s lard makes for a more complex taste; passion refuses to take a rest until the final bite.

Bake beetroot on the side, the accessory we’re inclined to forget about even though it is supposed to be the vegetable that comes in so well between two bites.

A mazel tov salad and a generous portion of tahini – cream of ground sesame seed lent a pretty green colour by parsley – comes on a wooden plate, and dipping seems to come natural. And to dip is to feel good.

The atmosphere of a ruin bar, activities, spices and the spirit of community eating in the air. The place is just as complex as the meaning of its name, deriving from love. An interesting and valuable fusion next to the Fogasház ruin bar.

A glass breaks somewhere in the background – and the staff shout collectively: