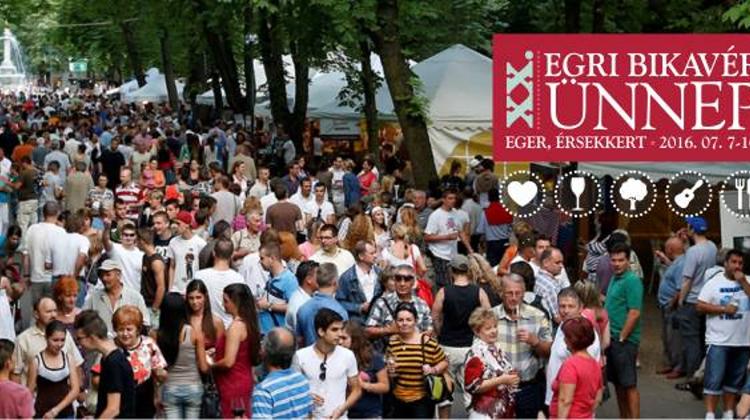 Egri Bikavér Festival is a celebration of the city’s famous son, it is not just an occasion for oenophiles, far from it, there are programs to keep all ages up to no good for the four days the festival lasts. Egri Bikavér or Bull’s Blood is, of course, the main attraction, almost 40 cellars will have stands at the festival serving Bikavér, and alongside them will be more than 20 local chefs producing dishes to complement the red stuff.

Among the winemakers who will be at the festival, Bolyki János, Gál Lajos and Thummer Vilmos are particularly well-regarded, and some of the noted restaurants turning out culinary delights will include Macok Bisztro and the Zsálya Bistro.

If the deep, acidic tones of Egri Bikavér are not to your taste then do not despair as two other wines, Egri Csillag (a white cuvée introduced in 2010) and locally produced Rosé are also part of the festival and many of the wineries will be showcasing their versions of these wines.

For those of you who aren’t particularly enamoured of the whole wine circus thing then there is plenty over the four days that doesn’t require you to sniff at a glass and make strange noises. Throughout the festival there are cultural and music events (see below for the full program) taking place in and around Érsekkert (Bishop’s Garden/Park).

Music and other performances are centred on two stages: the main Bikavér stage located in the centre of the park and the smaller, alternative Egri Csillag music pavilion in the northernmost corner. The former hosts folk dancing and more established Hungarian bands, while the latter provides a place for DJs and local acts to strut their stuff.

For children, there are opportunities to get involved in handicrafts, be dazzled by a light show, visit the petting zoo and explore the large park (which is largely enclosed).

Other events at the festival suitable for the whole family include a demonstration of coopering (barrel-making) and a veteran car exhibition.

In and around the main 'Bikavér' stage

11.30 Saint Donat's Day. Celebrated at the statue of Saint Donat at the Donatus Vineyard. Staging of Egri Csillagok, followed by a concert from the Dobó Katica Folk Music Band and songs from the Eger Star Folk Ensemble
17.00 Hoffer Tractor Show (At the main entrance to the sports stadium)
17.30 Performance by Egerszalók's Women's Choir and the Egerszalók's Men's Choir
18.00 Eger Star Folk Ensemble with the Egerszalók Orchestra and special guests Zoltán Belkovics and Sándor Krupa
20.00 Opening of the VI Lounge Singers Gathering with star guests Attila Kökény, Mujahid Zoltán and István Tabáni.

There will also be many bands playing at the more intimate Egri Csillág Stage.

Details of the program: http://egriprogramok.hu/en/event-calendar/158-angol-programok/16269-egri-csillag-stage-bull-s-blood-festival.html

For more information on the Bull's Blood Festival visit: http://www.bikaverunnep.hu/