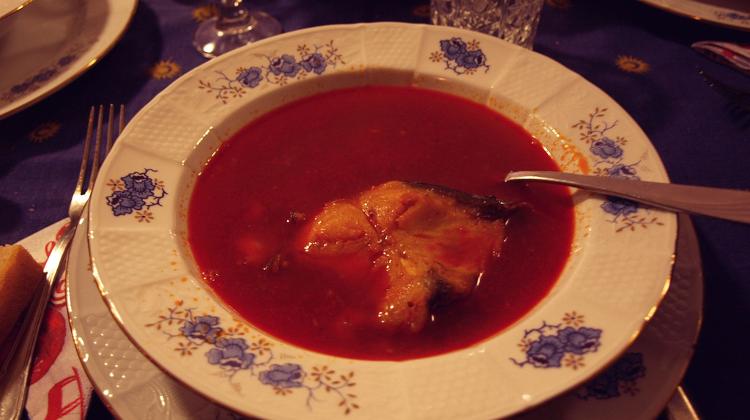 In Hungary fish soup (halászlé) is one of the most popular Christmas dishes. Hungarian fish soup halászlé is a hot soup prepared with mixed river fish - characteristic for cuisines of the Pannonian Plain and the Balkans, especially the wider region around the River Danube. The meal originates from Slavic cuisine. Traditionally, fish soup is prepared in a small kettle on an open fire by real fishermen.

It is made in many different ways, but all recipes contain onions, green peppers, and ground red paprika (őrölt pirospaprika) among their ingredients. The latter is added in copious amounts since it not only gives a distinct colour and flavour to the soup but also plays an important role in creating its true consistency.

The soup is always served with fresh, white bread. Traditionally pasta mixed with sour cream and cottage cheese (túrós csusza) is served as a main course following the soup.

To be honest I've never cooked fish soup by myself, because my father and my mother-in-law prepare fish soup for Christmas every year. But I have another reason too: I never could cut a live fish, in spite of the fact that I like fish soup very much.

Every region in Hungary has its own fish soup recipe, hence when we go to restaurants in different parts of Hungary, I would order it as often as possible. If you travel to Hungary, try Szegedi, Bajai and Tiszai halászlé :)

Actually I like my father's fish soup the most, so now let me share with you his special recipe. He said that he has cooked the fish soup in this way for forty years. So if you would like to cook Hungarian halászlé one day and if you are brave enough to also clean the fish, then do not hesitate to try out my father's recipe!

1. Preparation: Clean the fish and remove its teeth, tail, fins and scales with a sharp knife. Cut out the eyes from the head. Wash the cleaned fish with cold water. Open up the carp at its belly and remove the chitterlings. Slice it up for 2 cm thick slices and salt the fish fillets.

2. Make a fish stock. Cook the head of carp an the small fishes in water until tender, strain and pour it through a sieve.

3. Cook the chopped onion in water and until soft, sieve and put it into the fish stock.

4. Place the salted carp slices into the fish stock. Add slices of green pepper and the peeled sliced tomato, some salt if necessary and bring it to the boil. If you find it necessary, add some water.

5. Add the Hungarian red paprika powder, the wine and cook until the carp is tender.

6. Serve by carefully removing the fish fillets with a skimmer and placing them in the plates, then use a ladle to scoop some soup until its covered.