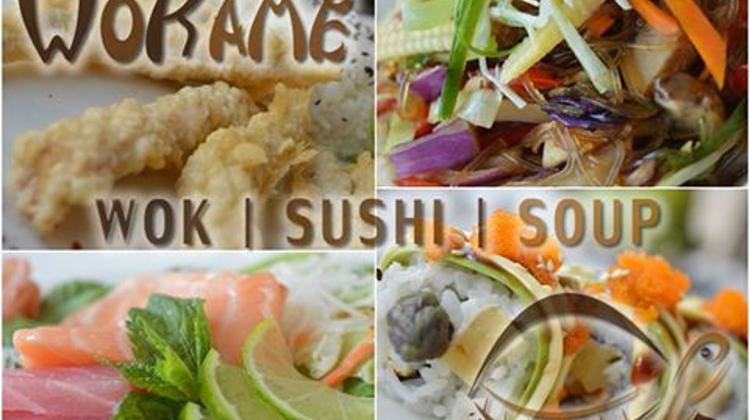 Király utca is not just the heart of Budapest’s party quarter but also one of the most gastronomically diverse streets downtown: no matter whether you are looking for traditional Hungarian snacks such as lángos or breaded cheese, Italian pizza, Greek gyros or burgers, seek and you will find. Only fans of Asian cuisine have been at a bit of a disadvantage so far but this has changed with the arrival of WoKame.

The “hippest“ street in town is buzzing with life any time of day: people stroll around taking in the exciting atmosphere of District VI, some go on a shopping spree, others enjoy the nightlife. But sooner or later everybody gets hungry, and this is what makes Király utca a lucrative place for restaurant owners such as Zoltán Fehér and Balázs Vilmos Hegyi. At the end of 2015 they decided to open their first own business just around the corner from Liszt Ferenc tér.

That they would end up serving delicious dishes from the Far East – especially Japan and Thailand – was not apparent from the beginning but the result of a thorough market research. “We wanted to offer something that was not there yet on Király utca,” says co-owner Hegyi.

In May they finally opened their Asian bistro WoKame, thereby adding sushi to the list of things to enjoy on Király. The restaurant’s name is a pun playing on the one hand on the word “wok” – the round-bottomed frying pan that is almost iconic for Asian cuisine and gives its name to the popular stir-fried dishes that are also served at WoKame – on the other hand on the Japanese “kame”, which means turtle. The cute and well-armoured reptile also adorns the logo of the restaurant.

Besides soups, it is primarily wok and sushi dishes that are on the menu in this timeless modern Asian establishment. According to Fehér the recipes for the dishes are not necessarily authentic but adapted for the European palate – especially when it comes to the level of spiciness.

In WoKame the wok contains whatever tastes good: whether thick udon noodles, ordinary egg noodles, the ribbon-shaped rice noodles or the almost transparent glass noodles. But also a series of rice dishes is on the menu.

The basic ingredients are paired with lots of vegetables and special sauces. Optionally you can add tofu, chicken, duck or beef strips on top of it all. Hegyi reports that so far the Pad Thai is their customers‘ favourite but he personally prefers the fried egg noodles with vegetables and peanuts.

However, the sushi section of WoKame turns out to offer an even wider range of choices. To most of us, sushi is just a piece of raw fish on cold rice in seaweed – but there is so much more to it.

Sushi in WoKame can also be purely vegetarian and comes in many different forms: for one there is the Maki Sushi – small, circular pieces of sticky rice and filling held together by a black seaweed paper, the so-called “Nori”.

But WoKame also offers “Nigiris”. These consist of oblong rice balls topped with thin stripes of fish, vegetables or a kind of Japanese egg omelette. Some of them are even artfully bound together by a ribbon of Nori.

The third type of sushi served at WoKame is the “Ura-maki”, which the menu lists as “Big Maki”. Unlike the Maki Sushi here the rice is on the outside and garnished with sesame.

Whatever type of sushi and filling you prefer, WoKame offers something for everyone and at an unbeatable price. “Our goal was to make sushi affordable,” says Hegyi about the pricing policy. However, this does not mean that they compromise on the quality. Fehér pledges that only fresh, high-quality ingredients will find their way on the table or in the sushi roll.

“Forget about the amazing food! It’s the service that is truly outstanding!“

Although WoKame only opened up a few months ago, they have already received some outstanding reviews on popular restaurant rating platforms (including the above quoted). Many guests especially praise the outstanding service.

“I used to work in the service sector myself and also know how it feels as a guest, to be served by an unfriendly waiter,“ says Hagyi. “Therefore we made it our goal to offer just the best service. We try to ask our customers repeatedly whether they are satisfied or need anything.”

Besides the great service, there is one more aspect that all the reviewers agree on: the portions are large and the prices are reasonable. Fehér and Hegyi are determined to keep it this way, and ensure that WoKame will have many more happy customers in the future.