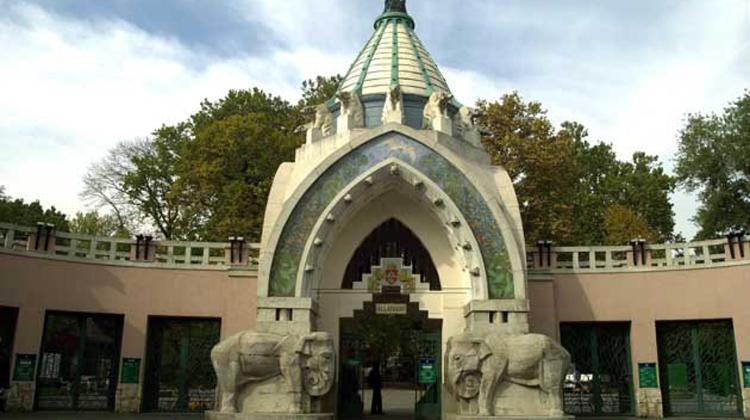 No, no, this photo is not from India, it’s a decorative piece of the Elephant House in the Budapest Zoo, called ÁLLATKERT (lit. ÁLLAT=animal KERT=garden) in Hungarian. The Budapesti Állatkert is worthy of the name garden. As fans of the Budapest Zoo claim, it’s like a five-star hotel for the animals who live in Art Nouveau buildings, bathing in thermal waters, pampered daily by a most professional staff.

This 150-year old pride of the city has witnessed three major transformations since its foundation in 1866. During a makeover between 1909 and 1912, the zoo was enriched by the masterpieces of three outstanding Art Nouveau architects, Kornél Neuschloss (Main entrance and the Elephant House) and the illustrious duo of Dezső Zrumetzky and Károly Kós, whose Transyvanian-style wooden structures like the Australia House make the place so close to nature.

The second transformation was due to the saddest moments of the Állatkert. The vast majority of the animals fell victim to the carpet bombings of the nearby railway system in 1944 leaving only 14 survivors.

Among them were the hippos Kincsem 1 and Kincsem 2 (lit. ’my pearl’) descendants of Arany and Bandi (Golden and Bobby) the first hippos who bred in a Zoo first in the 1930s, and whose descendants have ever since then been ”exported” to numerous zoos all over the world. The secret of their fecundity may be the thermal water supplied by the neighbouring Széchenyi Baths, the chemical structure of which resembles the waters of the River Nile.

The third prosperous period of the Zoo (officially called FŐVÁROSI ÁLLAT- ÉS NÖVÉNYKERT i.e. Budapest Zoo & Botanical Garden) started after the change of regime in 1989 under a professional management. The celebrations in the anniversary year include a myriad of educational programs and unique events.

Spread over a vast area of the Budapest City Park, featuring well over 8,000 animals, our Zoo is well worth a visit.

Though the Zoo’s Art Nouveau gems are not usually included in Fungarian’s Art Nouveau Tour, we’d be most happy to extend the tour to introduce you to the marvellous heritage of Neuschloss, Zrumetzky and Kós.