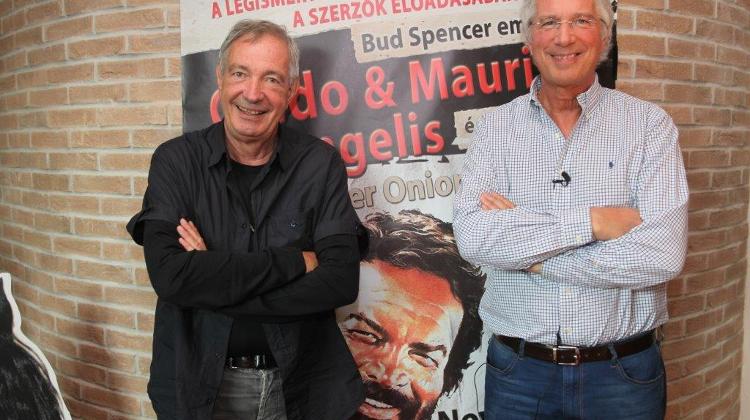 Symphonic movie soundtrack concert to commemorate Bud Spencer. The best-known movie soundtracks – opuses with Bud Spencer and Terence Hill, ’Sandokan’, ’Around the World with Willy Fogg’, ’Orzowei’ and many others – can be heard on 29 November at Papp László Budapest Sportaréna. Unforgettable movie frames with unforgettable melodies, presented by the original composers, Guido & Maurizio De Angelis and their Band, ’Oliver Onions’, accompanied by a symphony orchestra.

Guido and Maurizio De Angelis were mentioned among the most famous movie soundtrack composers in the world during their career. Under the name of Oliver Onions, together they composed soundtracks for most Bud Spencer and Terence Hill movies, but their work didn’t end here: during their long career they worked and composed music under several aliases like Guido & Maurizio De Angelis, M&G Orchestra, Dilly Dilly, and Oliver Onions.

With this concert, the world-famous composer brothers would like to show their respect and say farewell to the recently dececesed Bud Spencer, who was also their personal friend. The soundtracks of famous movies: "Watch out, we're mad!", „They Call Me Trinity”, „Even Angles Eat Beans”, „Crime Busters”, „Sheriff and the Satellite Kid”, „Banana Joe” – just to mention a few – will be brought to live during a big orchestra band concert in Budapest Sportarena.

Guido és Maurizio De Angelis mark other famous film soundtracks like „Sandokan”, „Orzowei”, ’Around the World with Willy Fogg’ and „Zorro”, which can also be heard during their show on 29 November, at Budapest Sportaréna. Oliver Onions represents more than 40 years of the history in Italian music and film music.

Since the 1960’s they have sold millions of records and composed countless film soundtracks. They played all genres and their songs stormed the European charts. One of their flagshlip songs, “Santamaria”, for example, stayed at the top of German charts for several weeks in 1980.

After 32 years, in 2014, Maurizio De Angelis decided to bring together their legendary band once again with his brother, Guido on his side. This decision led to the significant event that will take place on 29 November in Budapest, presented by their band ’Oliver Onions’, along 17 great Italian musicians and a nearly 40-member symphonic orchestra.

The world-famous composer duo, Guido & Maurizio De Angelis and their band haven’t played together since 1984, so this concert in Budapest will be their first gig in Europe after a long break, to commemorate the famous actor, Bud Spencer, who passed away recently. We can also expect a few surprise guests during the show.