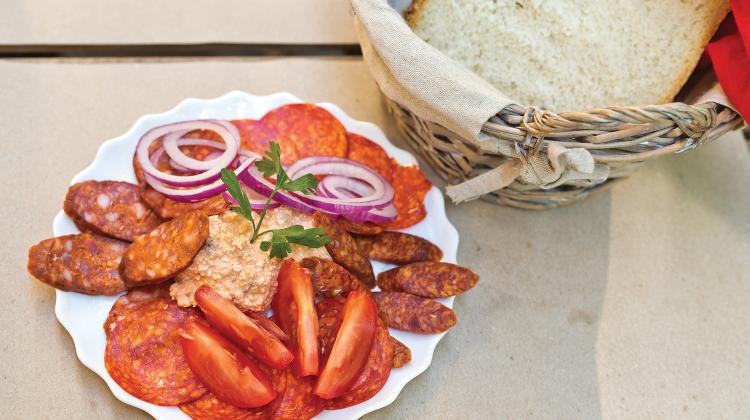 The lángos is the same for Hungarians as the currywurst for Germans. The fried dough is Hungary’s streetfood number one and it’s just as popular with tourists as goulash soup or Tokay wine.

The disadvantage: up until now you could buy the yummy fried treat mainly at snack stands in Budapest, where you had to eat it standing or while you were walking. However, attention lángos fans: since Lángos Papa opened, the capital has a modern, restaurant, raising the art of lángos to a new level.

“When I was still working in the tourist industry, people were always asking me where you could get a good lángos in Budapest, and I never knew what I should say – all I could do was to send them to the next metro station,” Gyöngyvér Keresztes, co-owner of Budapest’s first lángos restaurant remembers.

The restaurant on Andrássy Avenue has everything to make you feel good: a loving, even if simply designed interior, which reminds us of an atmospheric street terrace with its baroque ceiling paintings and numerous harmonious design elements. This terrace is open throughout the whole year and does not offer an unnecessary abundance of options that make you feel lost.

Keresztes is experienced well enough in gastronomy: Besides Lángos Papa she also operates three further restaurants (including the Puli étterem, about which we have already reported) and a café with her husband, a successful interior designer. All these places represent the Hungarian cuisine in the same way, as it is experienced by Hungarians – without all the cheesy folklore knickknacks.

The special thing about Lángos Papa, which opened in May, is that it actually has only one offer: a four-course menu for HUF 3000. The portions are large and are served very fast.

The first course is a hearty “zsíros kenyér”, which means a piece of bread with a thick layer of fat spread on it, and it is served immediately after placing your order. This first quick snack is followed by the appetiser. You can chose from a traditional goulash soup, a cold plate with different Hungarian sausages, a duck paté or, for those who prefer a lighter, healthier option, a plate with fresh melons.

Our advice: In case you decide for the cold plate, pay attention that you don’t fill yourself up with the bread served on the side, which is really delicious, otherwise you will be in trouble just like us, having to adjust your belt before the main dish arrives.

Two Hungarian classics in one

The main dish is a real challenge for the stomach, since you can’t say that eating a lángos with a diameter of almost 30 centimetres is no challenge. The dish comes in the traditional version with sour cream and cheese and it’s also available in combination with other typically Hungarian dishes, such as wild ragout, beef ragout or paprika chicken ragout.

Even if this may sound a little bit like too much at first, the meat dishes make a good match with their thick, creamy sauces with the lángos, which serves both as a plate and as a garnish at the same time.

As a special extra, the restaurant also offers lángos prepared with gluten-free cornflour. For guests with food intolerance this is the only place up until now in Hungary where they can try the classic dish without having to count with the grave allergic consequences.

Even if despite all this you are not particularly fond of the fried dough dish, you can still get lucky at Lángos Papa: For a main dish you can also pick the Hungarian potato dish “rakott krumpli”, a large portion of goulash soup or even a rocket salad with goat cheese and honey dressing.

If you still feel like there is place left for a dessert, you can choose between a portion of Somlói galuska (sponge cake with chocolate sauce and nuts) and a piece of strudel.

If you are planning to visit Lángos Papa, you should come with real hunger and denounce every other meal for the rest of the day. Even strong men are put to the test here with the giant portions (especially the lángos with the meat sauces).

Of course you can opt for ordering a single lángos too, however, the price-performance ratio of the menu is too good to miss. The restaurant is also suitable for eating with a large group, so it’s a good chance for example for impressing foreign business partners with an experience about traditional Hungarian food.

The name “lángos” comes from the Hungarian word “láng”, which is flame in English. In the old times lángos was prepared on an open fire with the help of a grid. The yeast dough used was mostly a leftover from baking bread. However, ever since home-baked bread is not common anymore, the preparation method of lángos also changed. Instead of preparing it in the oven it’s fried in a large pan in abundant oil.

It’s also interesting to know that although lángos seems to be a popular food mostly at the Christmas markets in Germany, in Hungary it’s not connected with Christmas at all. Most Hungarians associate lángos with summertime and their holiday at the Balaton, where it’s a popular snack after bathing in the lake.